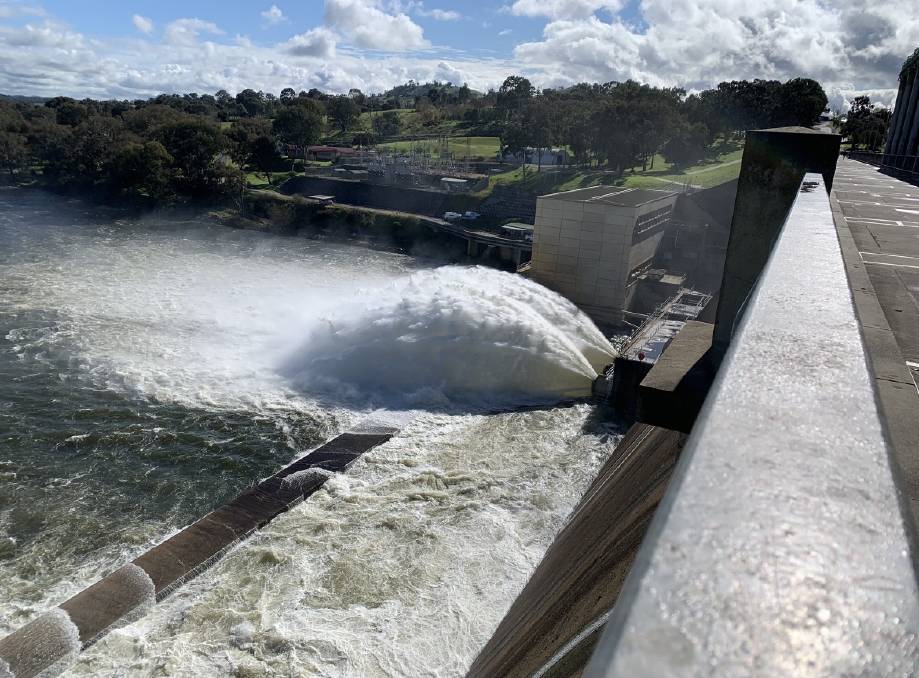 FULL NOISE: Up to 31GL of water a day has been released from Hume Dam to create airpsace. It's the first time the dam has filled since 2016. Photo: Stewart Alexander

Hume Dam has filled for the first time since 2016, with up to 31 gigalitres a day released from the Murray storage in the past week.

This compares to inflows of up to 64GL a day last Monday, which decreased to 18GL/day on Sunday. This Monday, the dam was 97 per cent full, holding 2,900GL.

"The flow rate will keep Murray River levels similar to what they have been in the past few days - a little above channel capacity but well below minor flood level at Albury," Mr Reynolds said last week.

"The release rate is likely to change in response to changing conditions in the catchment.

"We're actively managing Hume Dam and our river operators are working around the clock to assess new inflow and weather information and manage releases."

Mr Reynolds said their priority was keeping the dam safe, capturing and storing water, and where they could, mitigating floods, however added that the limited airspace currently available meant that the ability to mitigate high flows was limited.

"There is now a high chance of significant flooding downstream of Hume Dam if further heavy rainfall events occur. We are planning to create more airspace over the next couple of weeks," Mr Reynolds said.

"Communities should not be complacent about floods downstream of Hume Dam. When the storage is near full, large flood inflows must be passed downstream as they arrive."

There was a small rain event over the weekend, with up to seven millimetres in parts of the Hume Dam catchment.

The Bureau of Meteorology said minor flooding was continuing along the Murray River at Corowa, with the river peaking at around 5.10 metres on Sunday.

The Murray River at Albury was expected to remain below the minor flood level (4.30 metres).

While at this stage, river levels along the Murray River downstream of Corowa and along the Edward River are expected to remain below the minor flood levels.

Meanwhile, the Menindee Lakes system has reached 100pc capacity for the first time since 2012, with 1750GL now held across the system and inflows of 18GL a day.

MDBA's acting executive director river management Andrew Kremor said given the current flows in the Murray, significant releases of water were not likely to be called from the Menindee Lakes in the short term.

"Releases from the Menindee Lakes are likely to commence when flows in the Murray return to regulated conditions, which in turn depends upon future rainfall in the upper catchments of the Murray, Murrumbidgee and Goulburn systems," Mr Kremor said.