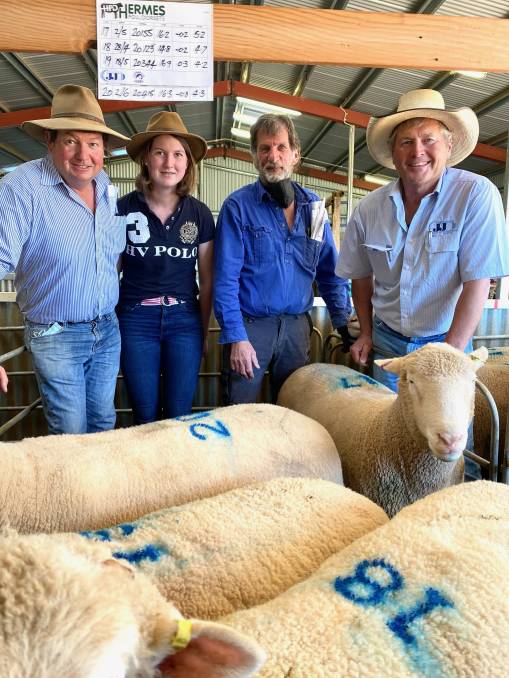 Hermes Poll Dorsets at Woodstock via Grenfell sold all 111 lots at its annual on-farm sale, Friday, recording a $2335 average.

The top lot went to $3600 for a June drop ram weighing 110 kilograms, going to long-time repeat clients James and Pheobe Clifton at Piney Range via Grenfell. The family went on to assemble a draft of 11 to average $2680.

Stud principal Sandy Morrison said the top ram had excellent structure and fleshing. His breeding capacities ranked in the top five per cent of all terminal breeds for PEMD, TCP, LEQ and LMY.

"His estimated breeding values for muscling at 4.3 put him well above the draft average of 3.8. Terminal breed averages nationwide are 1.7," noted Mr Morrison. "Commercial clients see a lot of advantages in buying sheep that have meat for the meat market."

Mr Clifton said the ram would, like the others bought from Hermes over 30 years, fit into the family program of putting Poll Dorsets to first cross and composite ewes. Sucker lambs are consigned to Breakaway Meats at Cowra as heavy trade and premium butcher's quality by the time they are 4.5 to 5 months old.

The Duggan family, Woodstock, were the volume buyers - taking away 21 rams to top at $3200 and average $2700 with their property manager, Kim Davies, saying Hermes reputation for good growth and high muscle.

"Producers get paid for meat. We select rams in the top 5pc for those two traits," he said. "We like to keep it simple. If you select for more it gets complicated."

The sale was settled by agents JJ Dresser and Co, Woodstock.

Sponsored by
AFPA NSW welcome announcement but say it is not a long-term solution to supply concerns.
Test
Rural Australians have reacted with alarm over a fine dished out to a Queensland man for carrying a pocket knife.
Test
An online sale failed to dampen enthusiasm for The Glen Angus, with a $2000 jump in average price.
Test
There has been an apparent breakthrough in the global race to copy meat in the laboratory.
Test
Repeat buyers turned out in force at the Poll Boonoke/Wanganella ram sale
Test
Local and interstate commercial woolgrowers snapped up the entire draft of 120 Poll Merino rams to a top of $7500 and to an average of $2354.
Test
Cows with calves hit a whopping high of $3800 a unit during the Maitland store cattle sale on Saturday.
Test
New mid-to-slow maturing variety given a go by Southern NSW growers.
Test