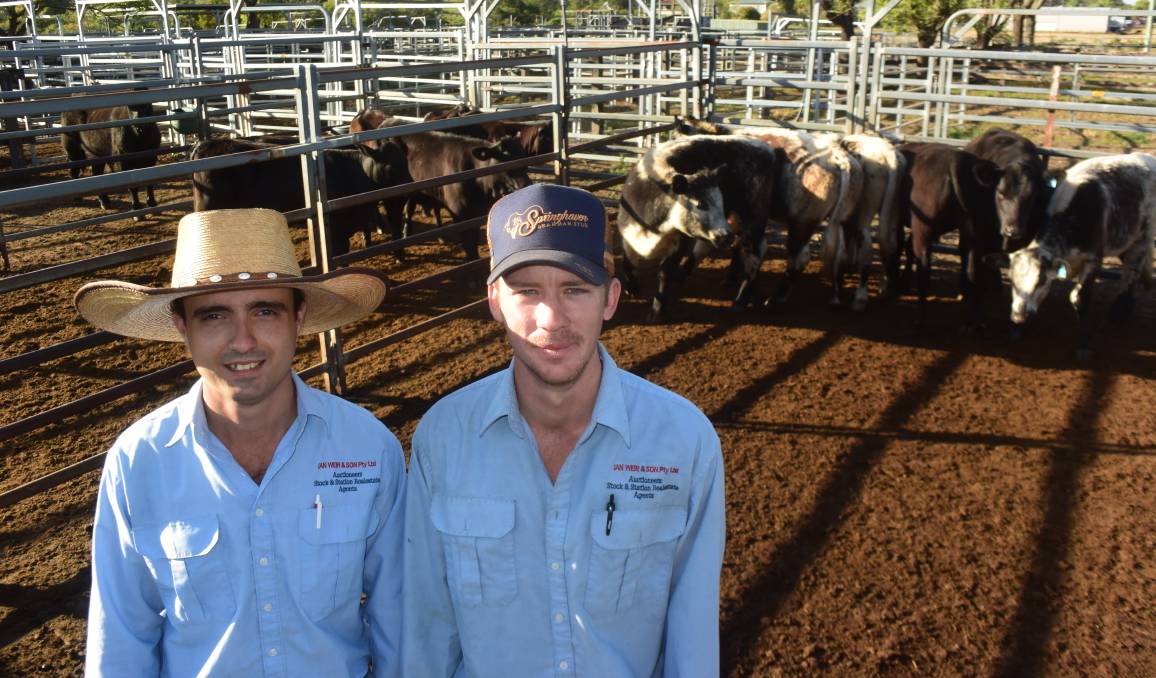 Ian Weir and Son agents Mitch Dundas and Luke Allen, Lismore, with a line of North Star Pastoral Speckle Park vealers which sold for 790c/kg at Lismore on Tuesday.

Weaner cattle buyers are snapping up 90 per cent of the light cattle in saleyards, leaving processors with the crumbs.

IN THE north-eastern corner of the state, demand for six- to nine-month-old calves is running hot.

A run of North Star Pastoral Speckle Park vealers from Midgin Flat, via Bangalow, sold back to the paddock for 790 cents a kilogram, or $1382.55 a head at Lismore's prime cattle sale on Tuesday.

"It's been happening ever since the drought broke 18 months ago," Mr Weir said.

"The meat works are finding it difficult to compete."

He said once again the NSW North Coast had become a "nursery" for light cattle headed for the western districts.

"Going back 50 years they'd buy our weaners here, take them away and fatten them up," Mr Weir said.

"For the 20 years from the mid-1990s to the early 2000s, operators would buy those 200kg (liveweight) calves and that was our strongest market.

"Now it's back to the weaners, it's been that strong."

The co-op is one of three Australian businesses dealing in veal, and the only one with a dedicated veal supply chain.

"Typically, it's the six to nine month old calf at 90 to 150kg (carcase weight) that we're doing as a vealer.

"However a lot of the younger cattle we'd be competing for in the marketplace are actually being grown out on oats.

"They're getting to feedlot entry weights and being put into feedlots.

"To counter those supply problems, we've had to purchase veal animals from further afield. We're also growing cattle out on a number of feedlots to ensure we've got the numbers."

"Certainly for any steer below 350kg, there's restocker and feedlot demand, everything for that," Mr Vogan said.

"I've never seen the market as strong as it is at the moment.

"I thought we were due for a correction at some point but it hasn't happened.

"You'd think once you get to December and the heat hits, you might see the sting go out of the cattle.

"But you could nearly guarantee the spring out of the plains and lower country now no matter what.

"Wherever there's feed, people will use the grass while they have the opportunity."