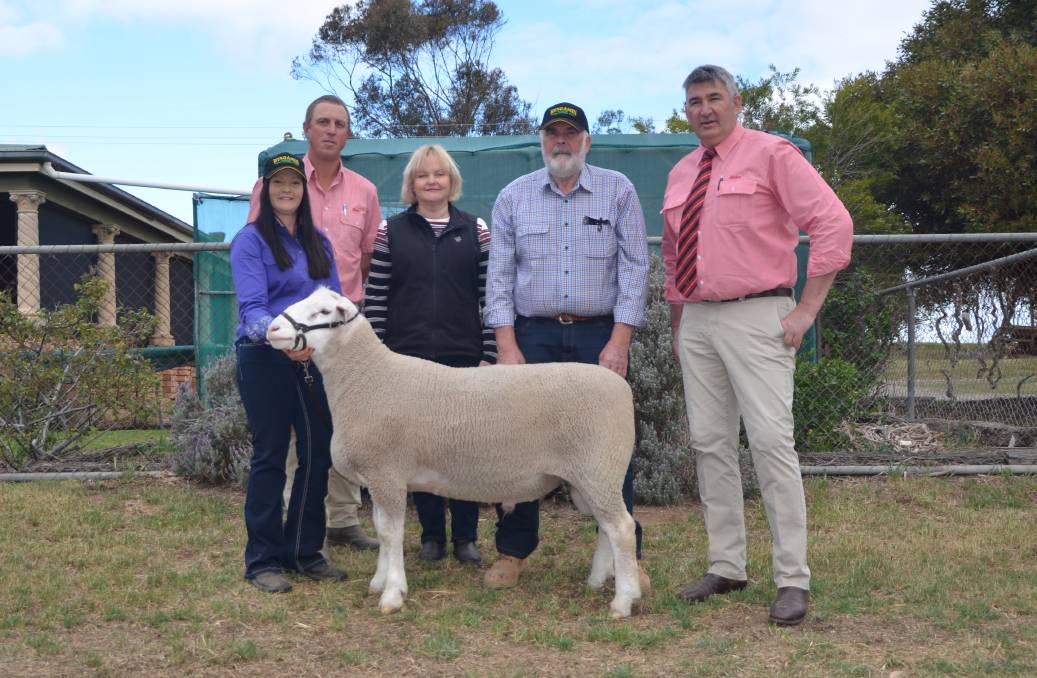 The Shillabeer family of Wingamin White Suffolks offered their entire draft of rams at their on-property auction this year and the decision paid dividends.

The $32,000 ram is a son of the Warburn 48 sire, which the Shillabeers say has been doing a wonderful job within their stud, and was bought by Chris Squiers, Shirlee Downs Poll Dorsets and White Suffolks, Quairading, WA, through AuctionsPlus.

Mr Squiers said they decided to compete on the ram after viewing images and footage in the sale lead-up.

"He was a striking, big sheep and had a good spread of figures," he said.

"We really like the sheep. We've been on the internet looking for one for quite a while and it's the best sheep we've seen around for a while."

"He is the full package really," Wingamin's Caitlin Shillabeer said.

"He's got the breed type, muscling, size, bone, length and doesn't put a foot wrong in the way he walks."

Wingamin's Deb Shillabeer said it was an unbelievable feeling to hold the SA on-property ram record across all meat breeds.

"He is a very worthy ram of that title and of that money," she said.

"We had a lot of enquiry on him pre-sale so were expecting it to go well, but it still exceeded our expectations.

"We're extremely confident that the ram will do a great job for the buyer and we look forward to seeing his progeny in the future."

RELATED READING:Sheepmeat full of flavour in the US

A daughter of Warburn 48 was also recently sold by Detpa Grove White Suffolks for $6500, an Australian record for a White Suffolk ewe.

Competition was also very strong across the flock ram offering, with buyers on AuctionsPlus competing with 34 registered on-site buyers.

Wingamin's first use of AuctionsPlus was well worth the time, with four of the stud rams and 19 rams in total bought via the platform.

Caitlin said the family were "extremely happy" with the way the flock rams sold, saying the lineup's consistency, good figures and evenness was reflected in the full clearance and average increase of $220 on last year.

"They're all presented well, are true to type, have tremendous data and their physical presence backs up those figures," he said.

"It was also an outstanding result on the stud rams kicked off by the fella that's just made a new state record.

"Not only on paper is he good - his pedigree and data is great - but when you have a proper look at him you realise how much of a carcase sire he is and is still structurally correct.

"It stands up correct and proud and has great presence."