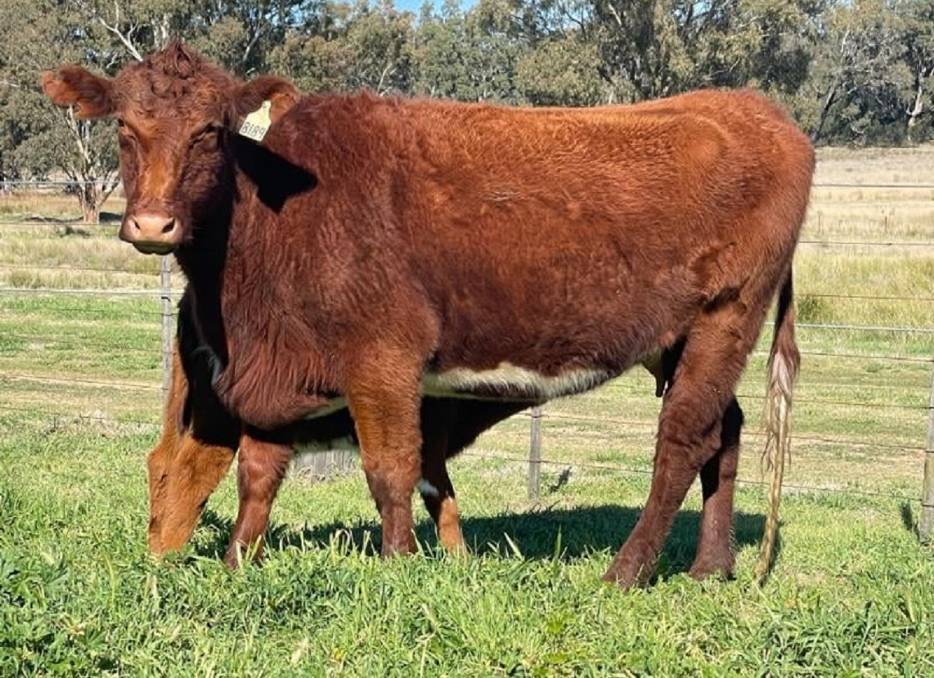 Three-year-old Poll Shorthorn cows with calves sold for a high of $4000 a unit at Dunedoo last week. Photo: supplied

It was a large field of buyers that turned out to compete at the 22nd annual Dunedoo Shorthorn and combined store cattle sale on Wednesday last week.

A DRAFT of 14 three-year-old cows with calves sold by Stirling and Belinda Fergusson, Moreton Bay, Dunedoo, topped the market at $4000 a unit during the 22nd annual Dunedoo Shorthorn sale, which incorporated the Dunedoo monthly store cattle sale on Wednesday last week.

The Turanville-blood Poll Shorthorn cows with calves sold to Pete and Katrina Yeo, Burrgoen, Merrygoen, while another two drafts of cows with calves from Moreton Bay sold for $3950 and $3800.

All up 1200 cattle were offered during the sale.

Milling Stuart agent Angus Stuart, Dunedoo, said it was a large field of buyers that turned out to compete for a very good run of commercial cattle.

"It's great to see everyone with a bit of confidence," Mr Stuart said.

PT Lord, Dakin and Associates agent Paul Dakin, Dubbo, said cows with calves in particular met with very strong competition, which was reflected in the prices.

"There's an underlying confidence in producers to rebuild their herds as quickly as possible," Mr Dakin said.

"It's been a difficult winter for the region as it's been very wet, but now there's a guaranteed spring."

Among the Shorthorn breeding females, a draft of 15 two-year-old Poll Shorthorn first-calvers were sold by Doolibah Partnership, Bunnan, to RB and JA Bowman, Dunedoo, for $3900.

Gundibri Pty Ltd, Merriwa, sold 26 Shorthorn yearling heifers for $1910 to a Wellington buyer, and another 20 at $1710 to an AuctionsPlus buyer.

Of the remaining store cattle, a quality run of cows with calves fetched between $2250 and $3900 a unit.

Geoff and Sue Rains of Mayfield, Birriwa, sold a draft of 13 two-year-old Angus cows with their first calves by Borragul Angus bulls, to Bulliroy Creek Pastoral, Birriwa, for $3900.

There was a limited offering of steers, and the majority made between $1140 and $2100. In the mix were a draft of 15 Angus-cross steers sold by Wayne Hattenfells, Willow Bend, Elong Elong, to Bulliroy Creek Pastoral, Birriwa, for $2080.

The sale was conducted by Milling Stuart, Dunedoo and PT Lord, Dakin and Associates, Dubbo, and interfaced by AuctionsPlus.