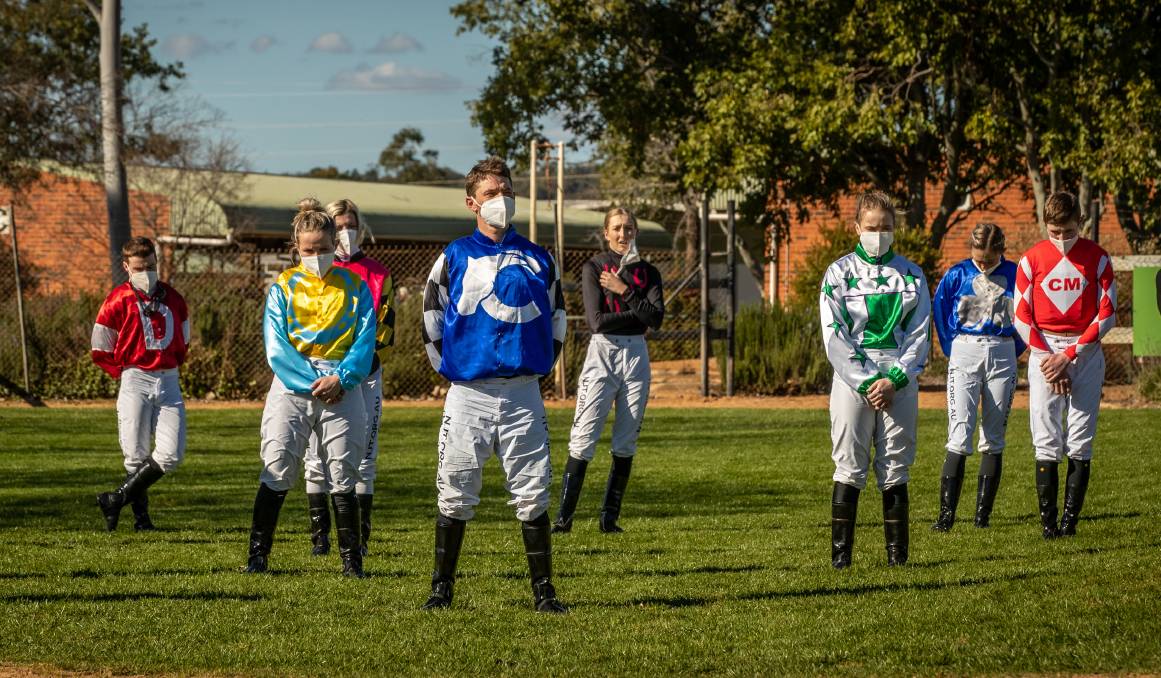 Jockeys at Dubbo observe a minute's silence for their colleagues who have died or been badly injured. Photos by Janian McMillan.

You wouldn't hardly know the thickset man moving about the jockey area on a race day is a man not of the silks, but of the cloth.

By day Mark Bartimote is a truck driver trainer, but on the days Dubbo hosts a race meeting he's there among the racing throng, just as happy as he is on Sundays among the Christian flock.

As one of 16 racing chaplains in Australia, his volunteer work is one of the elements that has become vital to keeping the human heart of racing alive. He's there in the ambulance if a jockey is injured, he's there on the seat if they need a quiet word, or he's there for a coffee if they want to meet up and talk about the ups and downs of racing and life - and there are many of them.

He's also a pastor, but he keeps the bible in his back pocket, and speaks on a down to earth level with people who are often sacrificing so much in their lives to pursue a racing career.

He's part of Sports Chaplaincy Australia and is also involved with the rugby club in Dubbo. It's something he wanted to take on and his previous and present employers have also valued his work and given him the space to perform his role.

Mark liked horses when he was growing up but didn't really have much interest in racing. A Baptist pastor Bob Pryor eight years ago asked him if he'd like to give chaplaincy a go in Dubbo and he thought he would. Their role has the support of Racing NSW. "I'm not here to preach Jesus, which I could do all day long, I am here to relate," Mark says. 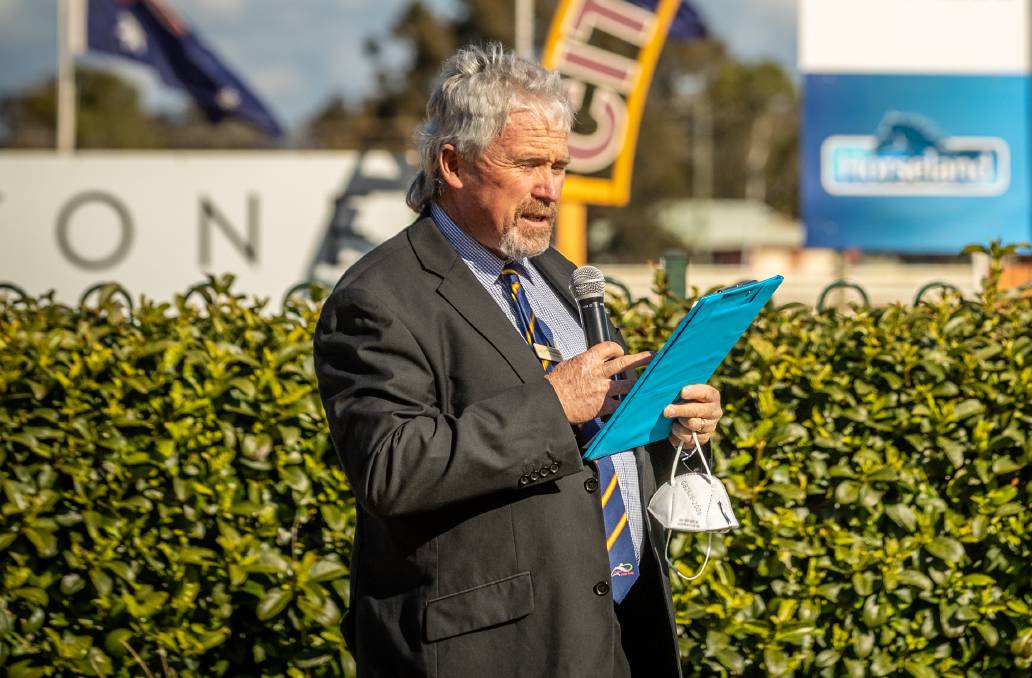 Racing chaplain Mark Bartimote is part of the raceday mix at Dubbo. He's become a mate to many jockeys to help them through hard times.

He recently led a remembrance ceremony for jockeys during the National Jockeys' Trust Day on August 1, where jockeys observed a minute's silence at Dubbo races. It's the fourth year they've held the ceremony at Dubbo.

"I've been accepted, and I was not sure if I would be at first. There are things they want to talk about that happen on and off the track. A lot of jockeys get busted up with falls and it's hard for them to get back. Sometimes I'm there in the ambulance and looking after their belongings if they need to go to hospital. They may have travelled and I might be the only one who can help. If they want, I can say a prayer with them."

He says jockeys often get frustrated if things don't go their way. They constantly battle weight and travel vast distances.

"Some find it very tough. It can be very competitive and often they don't get ahead or get the good rides. There's that industry pressure and then there's the pressure on their own bodies, always trying to lose weight. Sometimes they are also keeping a part-time job going, getting up for trackwork at 4am and then travelling hundreds of kilometres to a meeting. Because of the hard work involved some move into training and then find it hard to get trackwork riders and have to do that themselves, managing horses all hours of the day. I find it often amazing what they do."

Kody Nestor has moved from being a successful country jockey to now training more than 40 horses at Dubbo and he's been glad to have Mark as part of the racing fraternity.

"I remember him when he first came through and thought he was a really good fella. On the track it can get quite lonely and it was good to have him around," Kody says.

"There's a few chaplains around Australia and they do a good job. There's a lot of pressure on younger jockeys coming though and it can often take a toll."

Ken Dunbar has been riding for 35 years, ever since he's been a teenager. Like all jockeys he's had a constant weight battle, diets that see him always eating steamed chicken and vegies at the end of a week to make his weekend rides. One time heading out to Louth races he had the car heater on for three-and-a-half hours just so he could lose more weight.

He's broken a collarbone and various other injuries but largely missed the major ones many jockeys suffer. He's welcomed Mark into the racing fraternity in the Central West and says he's become a mate, and sometimes drops in for a chat. Ken says being jockey is hard but there are rewards if you can stick with it. He now owns a few houses and a block of land outside Dubbo. But you can largely forget a social life when you're a jockey.

The National Jockeys' Trust was formed to support injured jockeys or the families who have lost a jockey in a race fall. They have provided more than $4m in assistance since 2004.

The statistics are confronting: 890 Australian jockeys have been killed in race falls since 1847; more than 200 riders are injured each year on Australian racetracks; there are 500 race falls annually; 89 per cent of jockeys will have a fall that requires medical assistance during their career.

National Jockeys' Trust chief executive Paul Innes said a study was done by the Menzies Institute that found horse race riding was the most dangerous job in Australia. "Their families often worry if they will be coming home," he says. He's been a long time supporter of the racing chaplains and say they perform an invaluable job - not just for jockeys, but stable hands, trainers and strappers.

Australian Racing Christian Chaplaincy was formed in 1996 and chaplains are from all denominations and is affiliated with Sports Chaplaincy Australia.