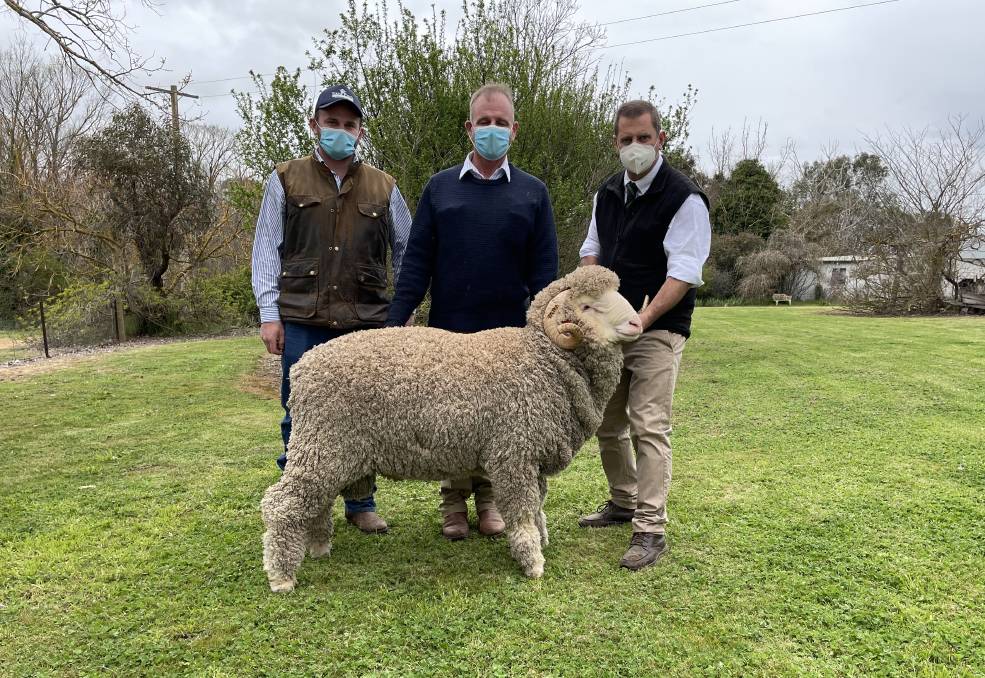 The reputation of the Tara Park-bred rams is well known in the Boorowa district where woolgrowers turned out to fill their ram requirements at the Tara Park Merino sale conducted on behalf of the Evans family, Boorowa when 105 rams were on offer.

Members of the Merino stud industry also competed strongly for rams at the top of the catalogue, with the top priced ram at $22,000 bought by Michael Hedger, Snowy Plain Merino stud, Berridale.

The top priced ram, a son of BJH by the Yarrawonga son of One Oak 10, had the fleece measurements of 16.9 micron, 2.5 standard deviation (SD) and 100pc Comfort Factor (CF).

Mr Hedger was attracted to his outstanding sire prospect for the purity and style of the fleece.

"It was his sweet wool all over his frame, wherever you looked on a great body and growth rate for such a young sheep," he said.

Their addition to the sire battery at Cottage Park had the fleece measurements of 17.7 micron, 3.0 SD and 99.6 CF.

Mr Pendergast admired the big frame and gutsy wool on his choice of the draft.

"He has a great lock, good clean head and is well covered with a fine/medium wool fleece with a long staple," he said.

A second ram at $3000 was also bought by Mr Pendergast.

Overlea Holding, Corowa, paid $14,000 for thier selection along with a second ram at $8000 while Ulah Station, Panuara, paid $13,000 for their pick of the catalogue, a son of BJH and included in the draft of three bought for $6667 average.

Victorian buyers included Nigretta Partnership, Coojar who purchased eight rams for $4094 average: Coryule Pastoral Co, Willowvale, who paid $5500 for their pick of the offering and GF and B Simpson, Wycheproof, paid $13,000 for their ram, a son of DON.

When the overall sale average price of $4062 was announced, stud principal Guy Evans was quite overwhelmed.

"It was an amazing sale and the best thing was that return buyers bought what they needed," Mr Evans said.

"It is about time, but it is so good to see the bush is really enjoying some good times."

The sale was settled by Elders, Boorowa, in association with Nutrien Livestock and the auctioneers were Rick Power and Charlie Croker, both from Nutrien.

The sale was interfaced with Elite Livestock Auctions through which platform attracted bidders on 22pc of the sale with 11 rams purchased to a top price of $5500.