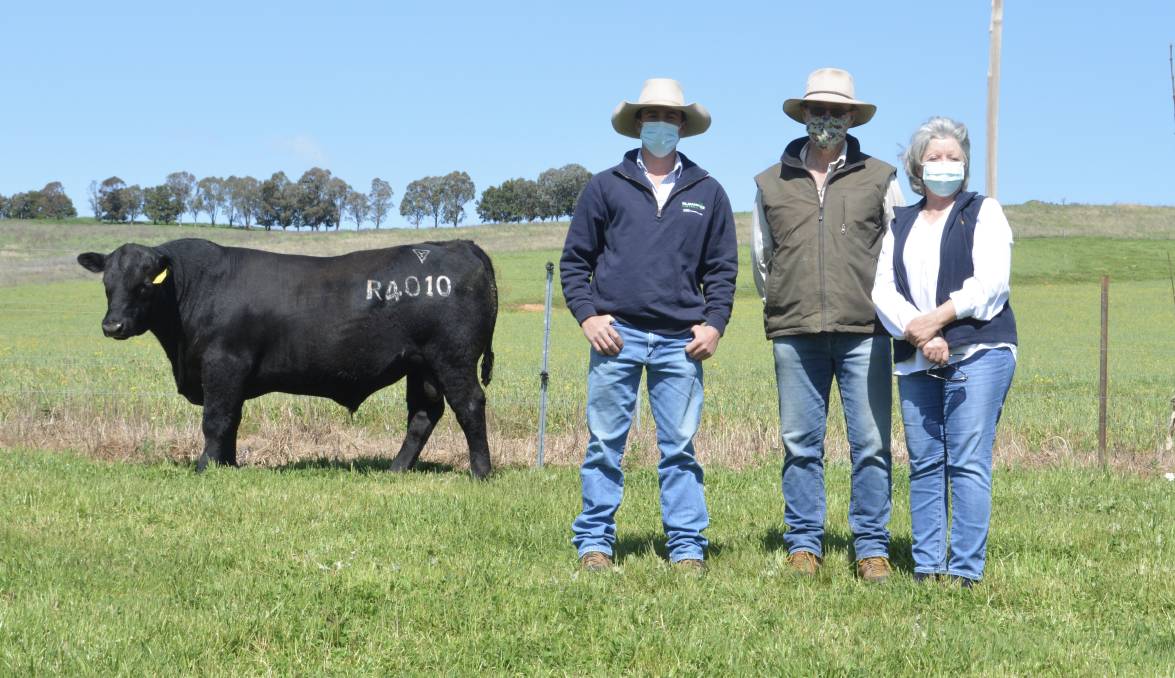 Overall, Lawsons Angus sold all 100 bulls on offerto a top of $130,000 and averaged $10,700.In the breakdown 74 bulls were sold at Claremont, Yea, Victoria, while the remaining 25 were sold remotely from Vince and Debbie Rheinberger's Boorowa property.

Sired by GAR Momentum and out of Lawsons Judd P4005, the 13-month-old was described as a breed changing bull with phenotype, balance, temperament and an exciting data set by Mr Rheinberger who runs a cooperator herd for Lawsons.

Harry Lawson of Lawsons Angus said Rocky R4010 is one of the unique bulls that have come to the top himself, combining figures, nine generations of artificial insemination sires and an elite dam.

"I only get excited about one bull in every 1000 or so, and he is the most exciting prospect since Momentous four years ago," he said. "Not many bulls in the Angus breed have nine generations of AI, and with Momentum, (Paringa) Judd J5, (GAR) Prophet and (Ayrvale) Bartel E7 - it is a pretty powerful pedigree, of the most-widely used, well recognised performance bulls, in one package.

"He is exceptional for calving ease, high growth to moderate cow size... he doesn't give up performance, and he is a breed changer in terms of carcase potential."

IN OTHER NEWS: Glen Innes beef carcase competition a win for Flemington and Tookawhile

James Laurie of Knowla Livestock said they were delighted to secure part of the bull. "He is a unique individual - when you look at the data, most bulls need to be protected for something, but he doesn't need protecting, he is really strong across the board," he said.

The largest volume buying of the day was TRT Pastoral, King Island, Tasmania, which bought 15 bulls.

Sponsored by
Thursday's webinar will cover a variety of topics.
Test
Have you signed up to The Land's free newsletter yet?
Test
Cooma employment boost as 130,000 concrete segments built
Test
A renowned Brangus breeder is being remembered as a beloved 'matriarch', who's left behind a lasting legacy.
Test
Senior Nationals have warned the climate brawl "could get ugly" if the government pushed through a net-zero target, however Prime Minister Scott Morrison has already made moves to sideline the junior Coalition party if it can't come to an agreement.
Test
Agents expect bidding will push past $6 million for a grazing property owned by a retired judge.
Test
Strong support for the heavy cutting Monaro-bred Merino rams at Greenland
Test
In an unusual trend, the weaner heifers sold for more than weaner steers.
Test