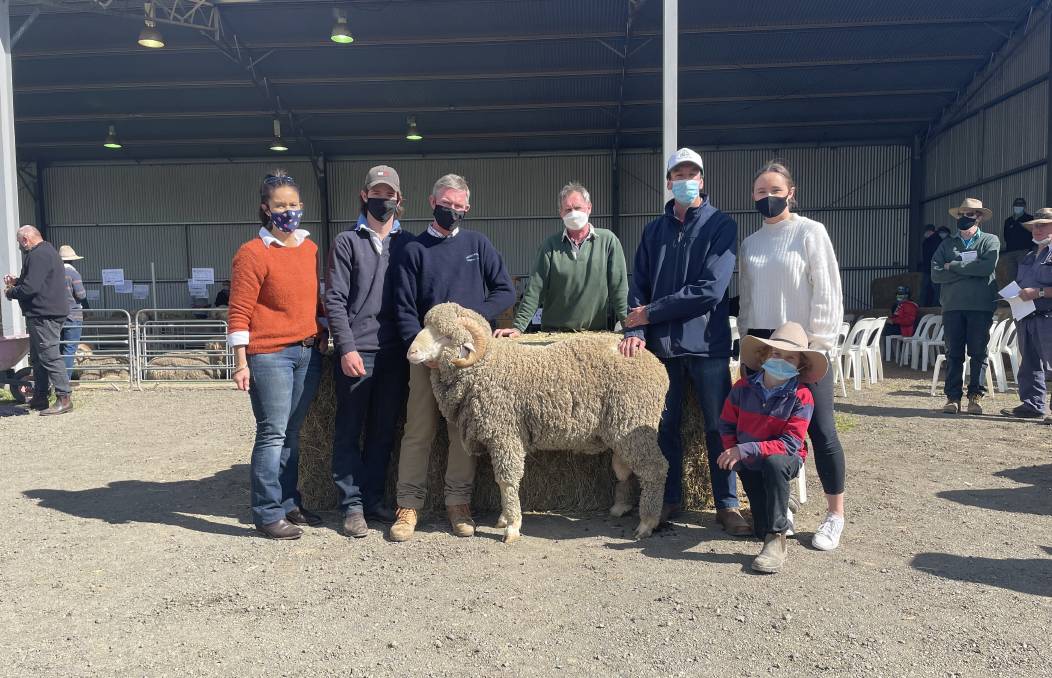 An almost complete clearance of finewool rams at Demondrille

We were searching for a pure Merryville genetic base with a touch of Tara Park for our traditional Italian spinners type wool - Geoff Burley, Guyra

A very even line of 112 yearling rams were offered for auction by Patrick and Andrew Davis, Demondrille Merino stud, Harden, for their 31st annual fine wool Merino ram sale.

The top priced ram was purchased by Geoff Burley and his father Thor, for their self-replacing flock on the New England which has been on Merryville-blood for more than 50 years.

Mr Burley is the fifth generation of his family to concentrate on breeding Merino wool and focusing on the traditional Italian spinners type for which the region is renowned.

"We were searching for a pure Merryville genetic base with a touch of Tara Park for our traditional Italian spinners type wool," he said.

"He has very stylish wool, true to type with deep crimped 70s count, length of staple and very soft.

"His fleece figures back that up."

Mr Burey bought a second ram for $5000 and he said the Tara Park influence over the Merryville base is producing some very stylish fleeces.

Other top prices included two at $5000 bought by Box Hills Partnership, Crookwell and one at $5000 purchased by DB and NA McMahon, Oberon.

M and S Gregory, Tharwa, added to their sire battery with seven rams to a top of $4000 (2) and average of $3035 while Boorowa district woolgrower Bill Hurley, who has won the local Merino ewe competition continued his association with Demondrille through the purchase of three rams for $2167 average price.

The sale was interfaced with AuctionsPlus and through that platform nine rams were bought for clients in Tasmania, Benalla, Victoria and Armidale.

Reflecting on the result, co-principal Andrew Davis said he and his brother never thought they would ever see a sale such as they had just experienced.

"This has been one of our best sales ever," he said.

"We certainly didn't expect this result with a strong average which is up nearly $1100 on last year which we thought was pretty good."

Demondrille have not long completed DNA testing of all their stud ewes and offspring.

The auction was settled by Nutrien Livestock Boorowa, with Tim Woodham and Charlie Croker sharing the rostrum.