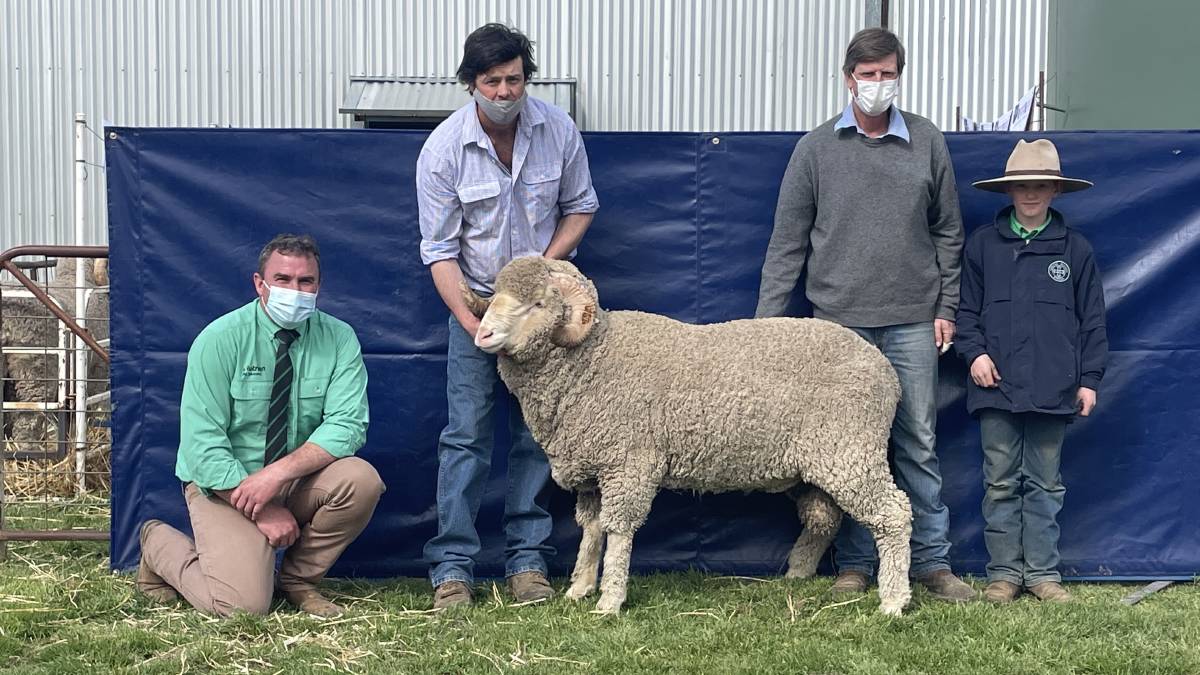 The 44th annual Koonwarra Merino ram sale but the 8th conducted by CT Merriman and Son, Little Range, Boorowa, realised a top price of $11,000 with an average price of $2890 for the 111 sold from 120 penned.

There was an extra ten rams penned and the sale average was $600 up on last year.

Stud principals Jono and Anna Merriman were proud to offer the white woolled and soft handling Merino and Poll Merino rams to a discerning clientele of committed woolgrowers.

Speaking before the sale, Mr Merriman said he had penned a few more rams to give clients a chance to get their choice of the offering.

"We have also displayed a selection of our stud sires to show the depth of our stud and as an indication of the breeding direction we are taking providing industry relevant rams producing wool and progeny for the current market," he said.

The top price at $11,000 was paid for an AI son of Glendonald Purple 868 weighing 99kg by Sinclair Stratton, Ulah Station, Four Mile Creek.

Mr Stratton has been buying Koonwarra-bred rams since the early 1990's and he said the style of wool along with the carcass attributes of the rams continue to satisfy his breeding ambitions.

"This ram has a great outlook, and is nearly flawless in his wool and body," he said.

"He has a very distinct wool with a low micron and a deep crimp and is nearly perfect in his structure."

Charlie Merriman, who was bidding on behalf of the losing bidders further described the ram as being the type that will not necessarily lift wool cut but will be a great breeder of ewes.

"He is a very good ram with the right water resistant wool for the high rainfall areas," he said.

"And we need to have rams who will breed good ewes and he is one of those rams."

Mr Stratton purchased a further three rams for an average of $4500.

The second top priced ram was bought by John Roxburgh, Clear Creek Merino stud, Young, who paid $6500 for his pick of the draft.

Mr Roxburgh was attracted to his new sire for his suitability to the market conditions currently existing.

"He is a good all purpose ram for us," he said.

"His wool is beautifully nourished and there is not much correction needed - he will be a very useful ram for our stud."

Mr Roxburgh was advised by Charlie Merriman who classes his Young-based flock in the selection of his ram.

Volume buyers included Somersby Pastoral who purchased eight rams to a top of $7000 and average price of $4062.

The sale was settled by Nutrien, Boorowa, with Tim Woodham wielding the gavel.