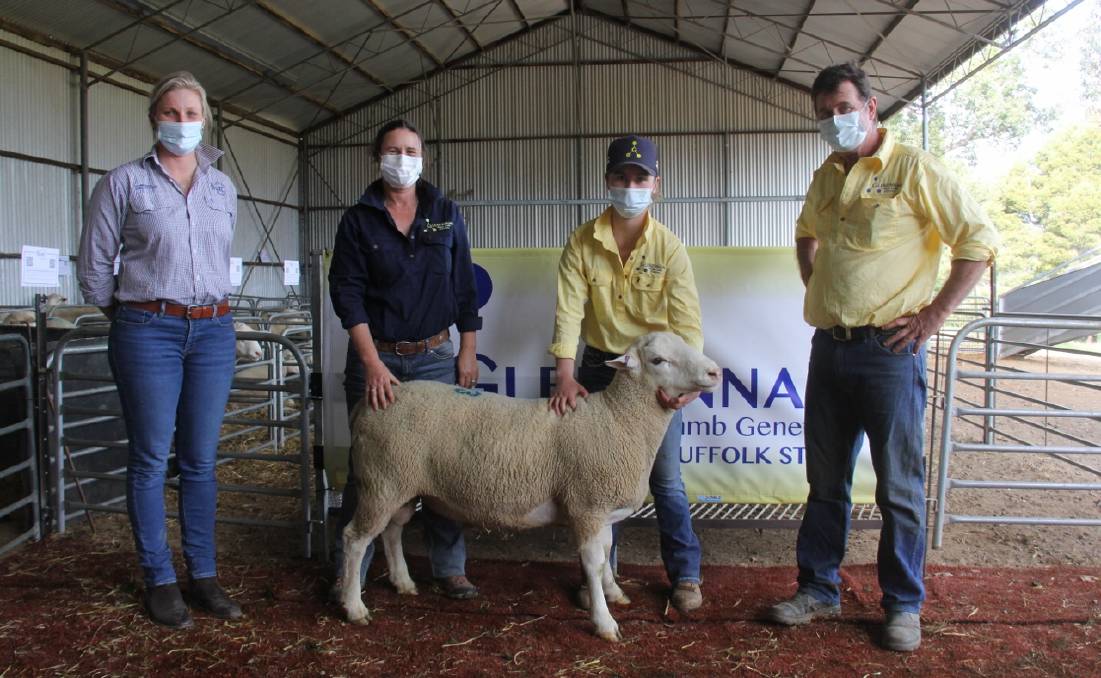 Glenfinnan Prime Lamb Genetics White Suffolk stud, Young, recorded by far their best sale to date on Friday, achieving a total clearance of 103 rams for an average of $3622, up 87 per cent on last year's average.

The top price of $4600 was reached twice and both rams went to local South West Slopes buyers.

Glenfinnan stud principals John and Anna Hayes said they thought it was a tremendous sale and it reflected the strength of the current lamb market.

"Prices were well above what we have seen in the past with demand exceptionally strong from repeat buyers and a number of new clients," Mr Hayes said.

"With lambs making over $10 per kilo it is a great time to be in the industry and we believe that people were prepared to pay for quality.

"The rams presented in excellent condition and we believe they were some of the best we have bred."

Mr Hayes said they offered as many rams as possible this sale, but it was clear demand outstripped supply.

"It is our intention to increase numbers offered for next year's sale by at least 30 per cent," he said.

He was a twin-born son of Glenfinnan 132 and had a post weaning eye muscle depth of 3.3, lean meat yield of 4.4 and Terminal Carcase Production Index value of 150.9 - all in the top 10 per cent of the breed.

The second top priced ram, Glenfinnan 200234, was purchased by Body Past. Co, Yass, via Auctions Plus. The twin ram, with weaning weights in the top 20pc was sired by Bundara Downs 1052, who stood out for growth and muscle, producing fast, early maturing lambs with high yield

"Both rams were in the top 10 to 20pc of all terminal sires in growth, eye muscle, LMY, Lamb Eating Quality and TCP, as well as having moderate birth weights," Mr Hayes said.

Goorama Pty Ltd purchased seven rams in total for an average of $3857.

Goorama purchaser Samantha Flanery said they were looking for true conformation, a capacity to walk, with low birthweight and high weight gain from birth.

The other $4400 rams were purchased by the Stumpjump family, Young, and Portadown Pastoral Company, Young. Portadown was the volume buyer on the day, taking home 12 rams for an average of $3825.

The proceeds of Lot 21, who made $3,200, was donated by John and Anna to Margaret House Refuge in Young.

Auctioneer Phill Butt said as one of the oldest White Suffolk studs in the state, Glenfinnan had a reputation for producing well-muscled rams with depth and length of body and tremendous bone.

"The large number of return buyers spoke volumes about the quality of the rams," Mr Butt said.

The sale was conducted by Butt Livestock and Property and was interfaced on AuctionsPlus.