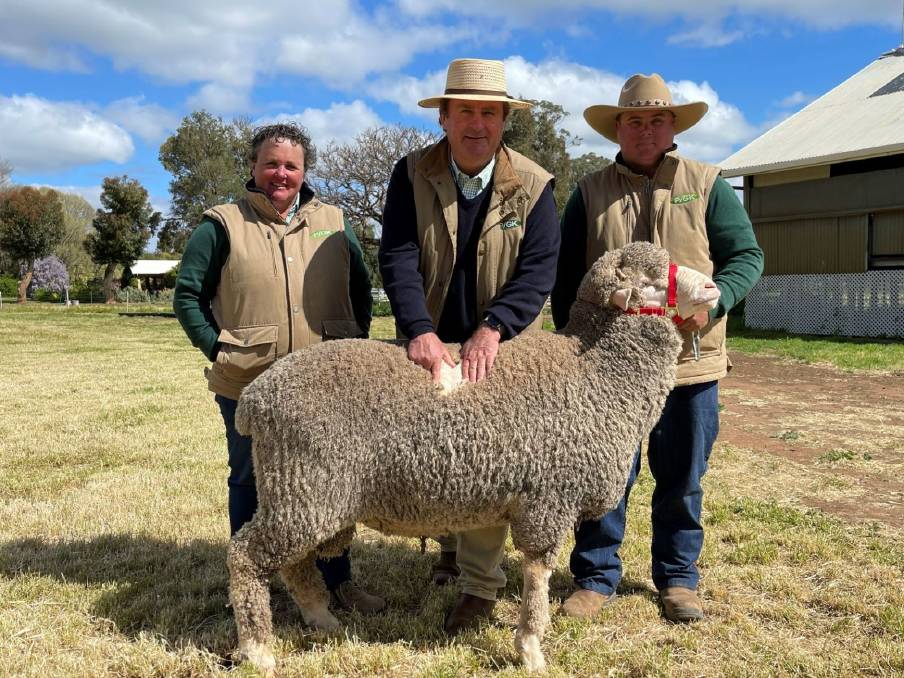 Pooginook clear all in mammoth catalogue.

Pooginook principal John Sutherland said they were thrilled with the overall result, thanking both repeat and new buyers.

"I was very pleased with the consistent prices throughout the sale, and had positive feedback from clients that they were able to buy rams to their budget and there was plenty to select from," Mr Sutherland said.

"We've also had a busy time in the flock yards filling orders."

The large majority of the draft sold for between $2000 and $4000, prices remaining consistent through the mammoth catalogue with commercial long-term volume buyers underpinning the result.

The Poll ram was by Pooginook 180458 and stood out for his balance of figures.

"It's quite rare to see a ram at the top end of ASBVs for all of those traits, he's a bit of a star.

"You want an athlete that can come second or third in every race...not just win the 100m sprint."

He was in the top five per cent of the industry for growth, with a post weaning weight value of 10.6, yearling weight of 14.3 and adult weight 13.

Purchaser, Narelle Knapp, Craigmore Pastoral, said they had been buying from Pooginook for generations, at close to 60 years.

"He also had a good staple length, which we need because we're six month shearing," Ms Knapp said, noting they bred their own rams for themselves and commercial producers.

"Poogi, the whole team, did an awesome job this year, in difficult circumstances."

Craigmore Pastoral Company bought a second ram at auction for $6000.

"There was a lot of strength in the horn sale," Mr Sutherland said.

He was one of three the Inder family bought for an average of $4667.

There were two rams who sold for the second-highest price of $7000 to Greenvalley Props, Eurongilly.

Tony Cook said he had been buying from Pooginook for more than 20 years for their self-replacing Merino flock.

"We're looking for well-grown rams, the wool's got to be a good quality-type," Mr Cook said.

"We like buying Pooginook because they have a really good constitution, do well on our country and are good promoters of wool and meat, for when we sell our wether lambs."

Rams went all over Australia, including a strong contingent of 46 rams headed to Western Australia with six long-term clients.

AuctionsPlus was a crucial component of the sale and there were 130 registered bidders on the online platform, who competed on nearly every lot offered.

"Given the border restrictions impacting people's ability to attend the sale, AuctionsPlus with our videos and photos of the wool and rams, and full suite of ASBVs, played a key role in maximising competition and allowing our clients to select their rams," Mr Sutherland said.

The sale was conducted by Nutrien, Finley and Elders, Deniliquin with Nick Gray (Elders) and Rick Power (Nutrien) taking the bids.