A six-foot brown snake startled construction workers at Greenbank when it was spotted on a building site.

A six-foot brown snake gave construction workers a fright when it slithered onto a building site at a southern Brisbane school.

The venomous snake took refuge among some tools until it was captured without fuss at the Everleigh Primary School site in Greenbank.

Workers watched it while they waited for a snake catcher to remove the creature.

"He was pretty cute in there," Tanzen Lilith, from Southside Snake Services, said.

"They saw it go into a box, and just as well. Can you imagine putting a hand in there to grab a tool."

Ms Lilith coaxed the snake into a bag and released it on Spring Mountain. 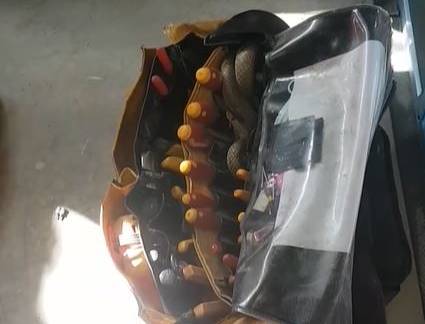 The snake took refuge among some tools.

She said building site callouts were common and gave top marks to the workers for their calm handling of the situation.

"Credit to the guys. They did the right thing," Ms Lilith said.

"They left it alone and watched from a distance. They did not panic, just watched where it went.

"I thought it was cute but the poor bloke needed access to his toolbox."

The calm capture also dispelled myths about the catcher's job too, she said.

"You don't have to jump on them, man handle them or wrestle them," she said.

"Sometimes it can be done as gently as that."

Mating season is ramping up across the region, with callouts flowing in.

Ms Lilith said it was common for residents to spot snakes mating, or competing with each other for a female's attention.

"They entwine around each other, then slam each other into the ground. It's pretty cool to watch," she said.

Ms Lilith urged anyone who saw a snake to keep a distance and watch it at all times.

"Even if the snake takes off, you can get an ID from the photo. It might not be venomous and people may not panic, and have to spend too much money [on getting it captured]."