Records tumbled at Friday's Armdale Park Poll Dorset sale as a strong buying gallery unleashed on a new flock ram average price of $3927 and a new record price for a flock ram at $5000 on five occasions.

The new record average not only beat the current record the average the Armstrong family had set 12 months ago at $2217, but added a handy $1710 to the average across the 173 rams offered and sold.

The intent of the buyers on the day was evident off the back of record sucker prices being set twice in recent weeks, from Armdale Park sired rams.

Gordon and Wayne Rodham, put some of their spare change from their sucker draft back into the sale, becoming one of the two clients setting the new flock ram price records of $5000 per ram, securing three rams at that price and a further ram at $4500.

B McRae, Mangoplah, was the second of the buyers to pay the new record $5000 price, as he secured two on the day. 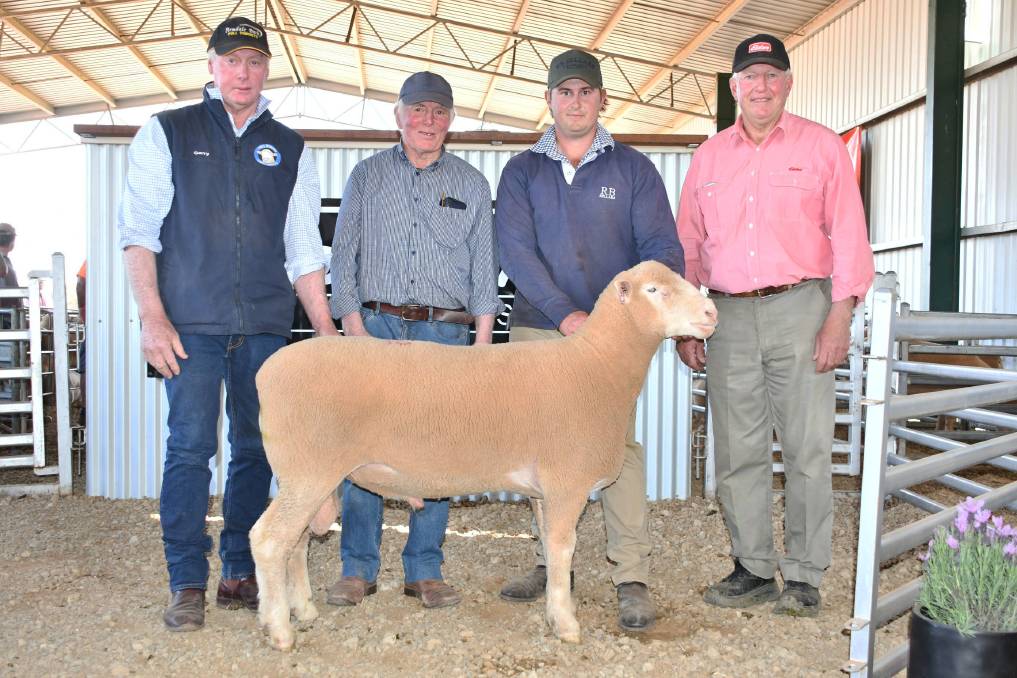 The top ram was bought by long time supporter Robert Mitchell, Ronobri Poll Dorsets, Lockington, Victoria, who paid $14,000 for AP473-20, who was sired by the A520-16 sire that is breeding the house down.

Mr Mitchell said A520-16 was a new sire line for him and one he was looking forward to seeing the outcross progeny from him.

Mr Mitchell has bought for many years at the Armstrong families sales chasing scale and length in his sheep. 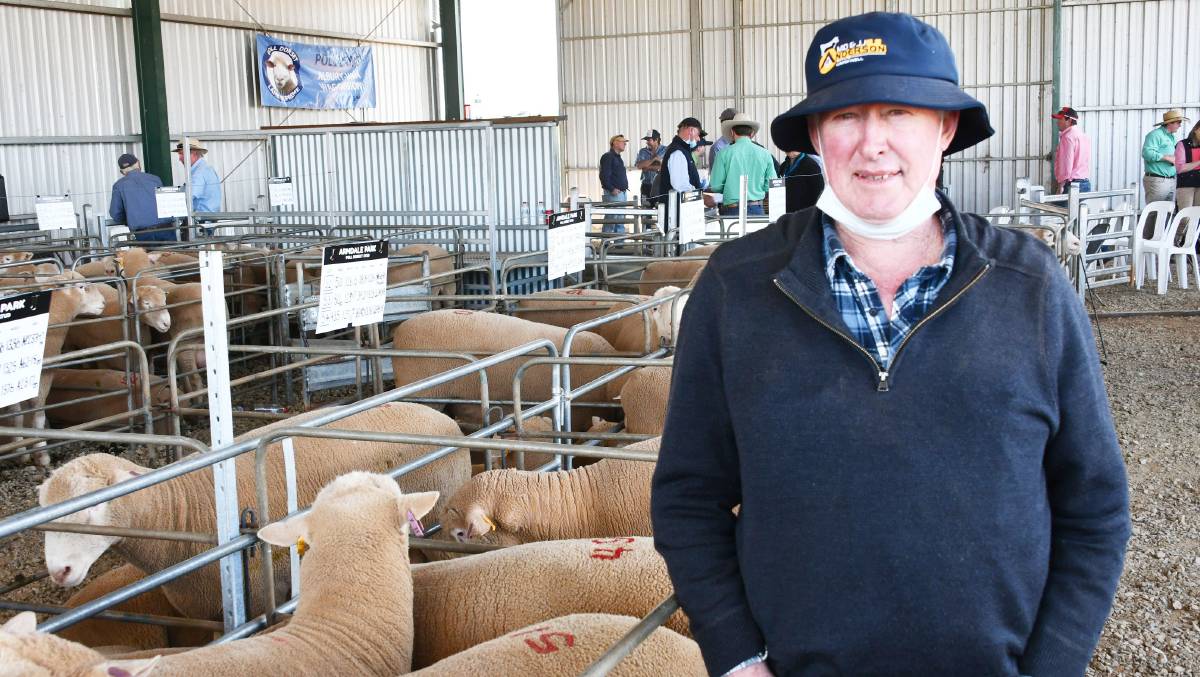 It was the day of the flock buyer though with many long term clients of 30 years or more realising on the day they were going to be in for a hot sale.

Terry Naughton echoed these sentiments saying the sale was dearer than what he had expected it to be, but was happy to secure his six rams at $4367 as the results spoke for themselves.

Mr Naughton sells off approximately 1700 suckers annually, which last year averaged $218 at six months of age, dressing at 27 to 28 kilograms.

Barry Dennis, Ganmain, has also bought for 30 plus years and said the appeal was the great ability of the lambs to get from birth to a saleable sucker weight really quickly was outstanding.

Mr Dennis joins 1800 first cross ewes, lambing in March and turning his first suckers off in the last week in July every year.

Mr Dennis has averaged $248 for his sucker draft so far this year, with 70 per cent of the draft sold to date. 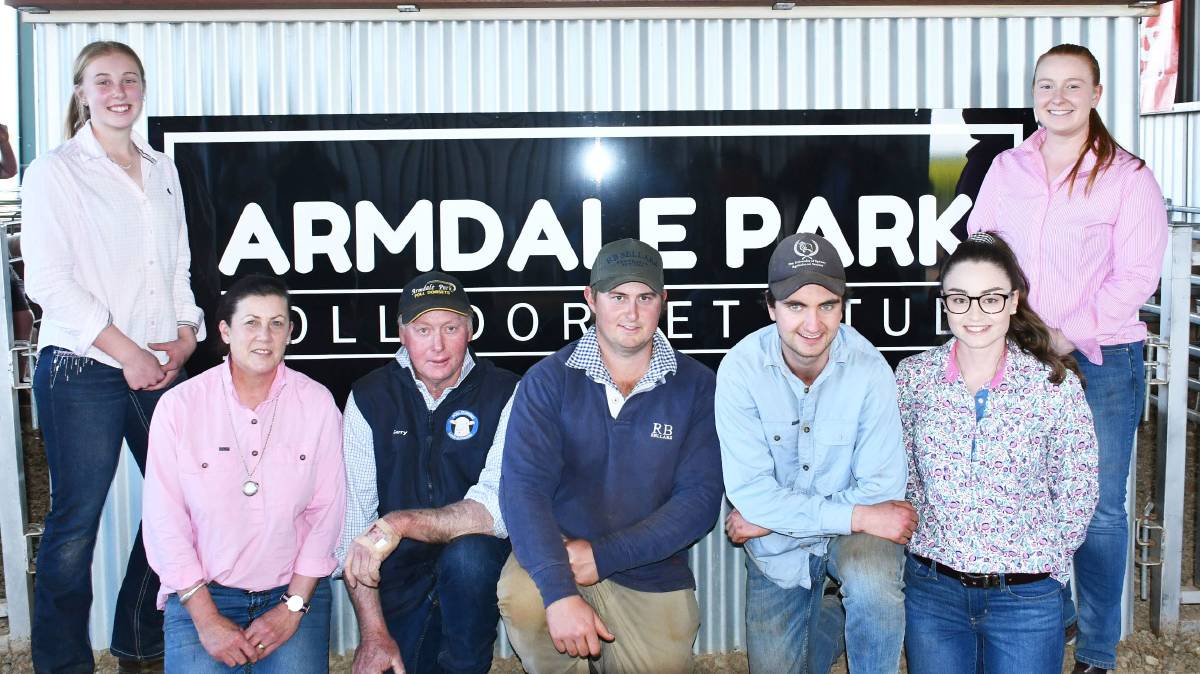 Mr Logan runs 1400 first cross and Merino ewes and has recently sold his sucker draft to tops of $288.

"The Armdale Park rams do the job for us, in getting a lot of lambs on the ground and up quickly to sucker weights," he said.

Hugh Cruickshank, Burges Hill Pastoral Company, Coolamon, was a buyer chasing high EMA rams above 35 and they had to be out of a twin or a triplet.

He bought nine rams at a $4189 average to target the sucker market, selling lambs off at four to five months, dressing at 22 to 23kg.

Mr Cruickshank runs 2500 first cross and Merino ewes and recently sold suckers in Wagga Wagga to a top of $4250.

Tom Pattison, Killarney, Marrar, followed trend of buying at every single one fo the Armstrong families sales over the years, securing four at $4250, while Lugarno Pastoral Company, Rugby, paid to $4500 and averaged $3645 for 11.

The sale was conducted by Elders and Nutrien with Steve Ridley and Peter Cabot as the auctioneers.

Sponsored by
Thursday's webinar will cover a variety of topics.
Test
Have you signed up to The Land's free newsletter yet?
Test
Cooma employment boost as 130,000 concrete segments built
Test
A renowned Brangus breeder is being remembered as a beloved 'matriarch', who's left behind a lasting legacy.
Test
Senior Nationals have warned the climate brawl "could get ugly" if the government pushed through a net-zero target, however Prime Minister Scott Morrison has already made moves to sideline the junior Coalition party if it can't come to an agreement.
Test
Agents expect bidding will push past $6 million for a grazing property owned by a retired judge.
Test
Strong support for the heavy cutting Monaro-bred Merino rams at Greenland
Test
In an unusual trend, the weaner heifers sold for more than weaner steers.
Test