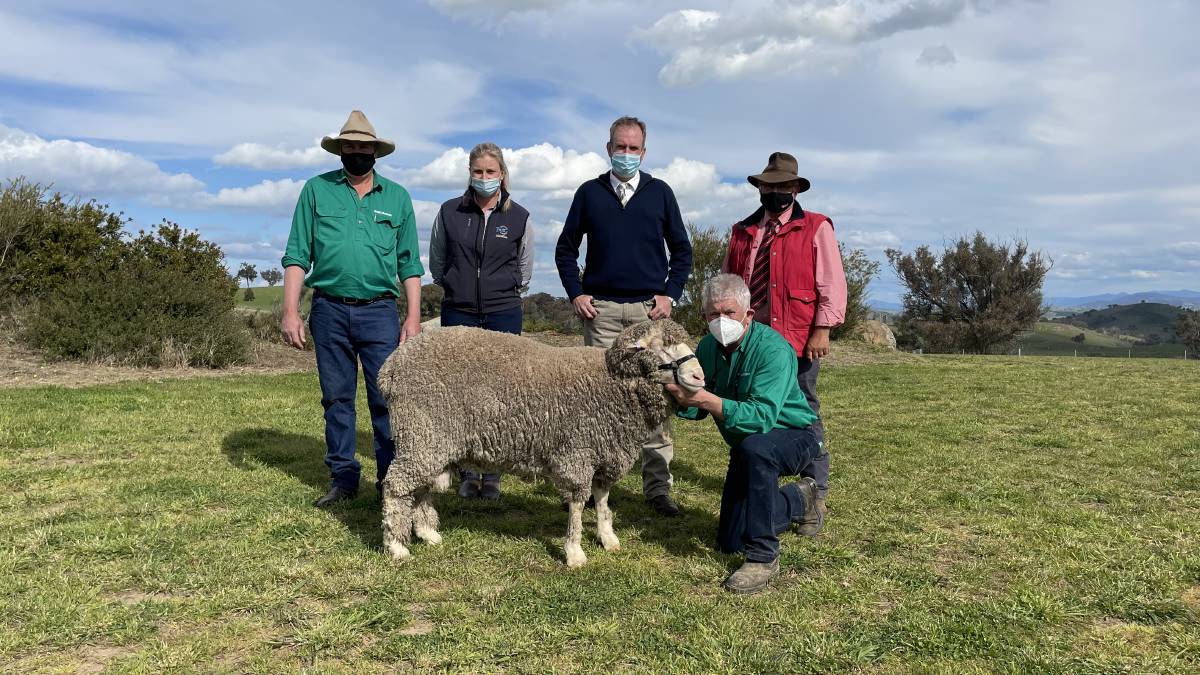 An outstanding sale result at Bogo Merinos, Yass, when committed woolgrowers bid up for their pick of the offering

He has good bone and spring of rib and carrying a superb fine wool fleece - Phill Butt, Butt Livestock and Property, Yass

Penning 200 Merino and Poll Merino rams for the 2021 annual ram sale, management and staff of Bogo Merinos, Cavan Station, Yass were very pleased to see a complete clearance of the May/June 2020, April-shorn draft.

Bogo studmaster Mal Peake said the measurement for early breech wrinkle is an indication of the amount of wrinkle on the tail area of the lamb at marking time.

"We are looking for negative figures and it is an important measurement tool for us and other sheep breeders who are contemplating ceasing mulesing or have already done so," he said.

"The figure allows those sheep breeders to evaluate the ram's potential to reduce breech wrinkle on his progeny, thus alleviating the need for mulesing and keep the fleece weight."

Mr Peake said the Cavan Station flock sheep and the Bogo stud sheep have not been mulesed for many years, following a deliberate decision to breed plainer breeched sheep while still retaining fleece weight and quality.

Phill Butt, Butt Livestock and Property Yass, purchased the ram on behalf of Mr and Mrs Wilder and said the longterm clients of Bogo return each year because of the productivity of the rams.

"This ram has good bone and spring of rib and carrying a superb fleece fine wool fleece," Mr Butt said.

"The Wilder's always buy at the top end of the Bogo offering and it shows in their flock."

Second top price at $8000 was paid for another PP Poll Merino ram, also born a twin, by Brad Furner, Bathurst.

Mr Furner, who was advised by Suzie Neal, Quality Wool, Orange, said he was attracted to the Bogo-bred rams for their size and balance, but still carrying a fine and soft fleece with weight.

"I thought my ram, which was my pick of the sale, has all the traits I am looking for in my traditional fine wool flock - good cut on a good body with a well crimped fleece," he said.

Reflecting upon the sale, Cavan Station general manager, Matt Crozier expressed his delight at the sale, as the strength of bidding from woolgrowers was amazing.

"It was an outstanding result, beyond our wildest expectations," Mr Crozier said.

"We put up an extra 31 rams and in a strong selling year, we are thrilled to have achieved such a result.

"We feel it is an indication of the strength in our program, endorsed by commercial woolgrowers."

The sale was settled by Elders, Yass, in association with Butt Livestock and Property, Yass, with guest auctioneer Paul Dooley, Tamworth, controlling the bidding.