Big crops and healthy stock. Coonamble farmers cross fingers for a kind finish amid talk of a wet October. 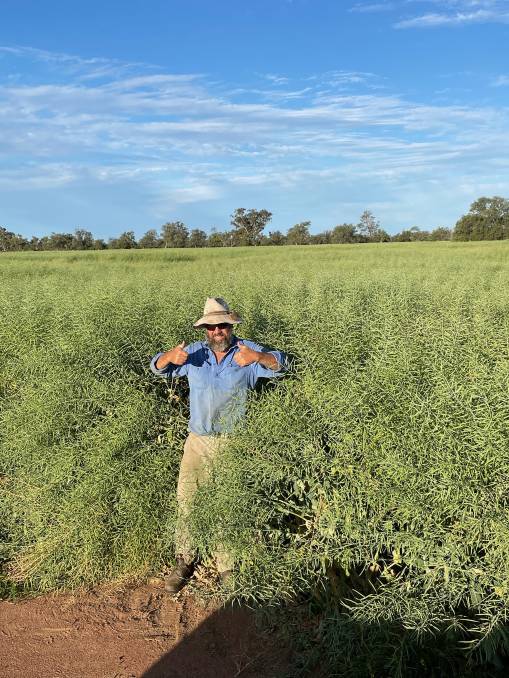 James Nalder, in one of his bumper canola fields, is enjoying the good season and prices. Photo: Emma Nalder

For mixed livestock and dryland cropping farmers, James and Emma Nalder, there may be a way to go before this season's crop is in the bin in what could be a rare "unicorn year", with excellent seasonal conditions aligning with high commodity prices.

For a long time the Nalders have been told by commodity forecasters the "boom time for agriculture" was just around the corner, dangling in front of them like a carrot, but always just that little bit out of reach.

"This time we might have both livestock and grain carrots firmly in our hands," Mr Nalder said.

The Nalders run a 6500 hectare aggregation east of Coonamble, with their 2021 winter crop comprising 2200ha.

Of this, 650ha was sown to canola, the rest to wheat, chickpeas and triticale, and they are now preparing to plant summer crops of mungbeans and millet.

No lupins went in this year, as it wasn't the right stage of their rotation.

The decision to put the largest area to canola was a combination of excellent soil moisture, stage of rotation and good prices.

He said it was useful as part of a double-break crop strategy for grass weed and cereal disease control while also making good use of the nitrogen from the previous lupin or chickpea rotations.

"Everything just sort of lined up so it was a good decision at the time," Mr Nalder said.

However, the season's strong run has included more than just the opportunity to grow canola.

The cropping country is run under no-till with isolated strategic tillage when the situation may require its inclusion, otherwise it is a chemical fallow, and he said it had been one of their quietest summers for weed control.

Despite good moisture, the temperatures last summer just "weren't there", so not much germinated, resulting in a cheap fallow.

"Potentially, it's been a bit of a unicorn year for us," he said.

It hasn't been undeserved though, after some extremely tough years in 2017-2019.

"Anyone that's still here, to experience two years like this (2020-21), it does a lot to rebuild the mental resilience," he said.

"With last year and this year, it's helping to ease the pain of it - it's a 180 degree turnaround."

The opportunity to put in a good area to canola also meant less pressure on the wheat sowing window, should they have got a wet May, and that's exactly what happened.

"If we were looking to put a lot of wheat in we wouldn't have got it in, so it was a good move to go with the canola," he said.

A light frost earlier this week has them a little on edge around how their chickpeas have fared. They won't know for sure for at least another few days, but the other crops were better placed to handle the late cold snap so the setbacks overall should still be minimal.

Likewise, mice were fewer and farther between than this time last year. While he knew of some people in the district that had applied precautionary baiting, and everybody was highly vigilant, he said nobody wanted to rush out and buy a heap of bait in case they didn't end up needing it.

Instead, it was the prospect of a wet harvest and the risk of COVID disruptions that weighed most on people's minds.

He said there was concern that instead of being one for the history books, it could be the one that got away.

Between this year and last year, it had been a focus of many in the area to improve on-farm storage and access roads for harvest.

Along with the prospect of rain, there was an expectation of big volumes headed for bulk storage facilities, as well as the existing backlog of grain due to shipping difficulties and the risk of backlogs being exacerbated from a chance COVID case.

In addition to extra on-farm storage, he said growers in the region had been proactive in lining staff up early, and lining up some extra hands to help keep things moving should a problem arise.

"I think a lot still have grain across many commodities on farm from last year that they still can't get away that will limit on-farm storage coming into this year's harvest," he said.

However, in the theme of being proactive, the Nalders had already forward sold "a reasonable chunk" of their canola and if the prices remained strong through harvest they would keep selling.

"We try and have a certain amount sold each year now so we know we've got money coming in once it's delivered," he said.

The cropping program has also been shunted along with the help of his agronomist, Jed McEvoy, Pursehouse Rural, Coonabarabran, who agreed this year's crops were shaping up well.

He said the Nalder's canola was about a half-half split between 44Y90 and Hyola 575.

It had received a single pass of Intercept, Verdict and Lontrel for the grass and broadleaf weeds in the early cabbage stage, and in the past fortnight, a heliothis spray with Karate zeon, and Pirimor for aphids.

Meanwhile, Mr Nalder said everybody seemed to be able to enjoy being outdoors more this year in the lead up to harvest with the great looking crops and greening pasture paddocks containing fattening stock - a massive turnaround from two years ago.

He and his wife had been tidying up the last of the livestock jobs and pre-harvest maintenance, otherwise both were savouring the current conditions and the potential windfall ahead for all if the season's good fortunes continue a little longer.