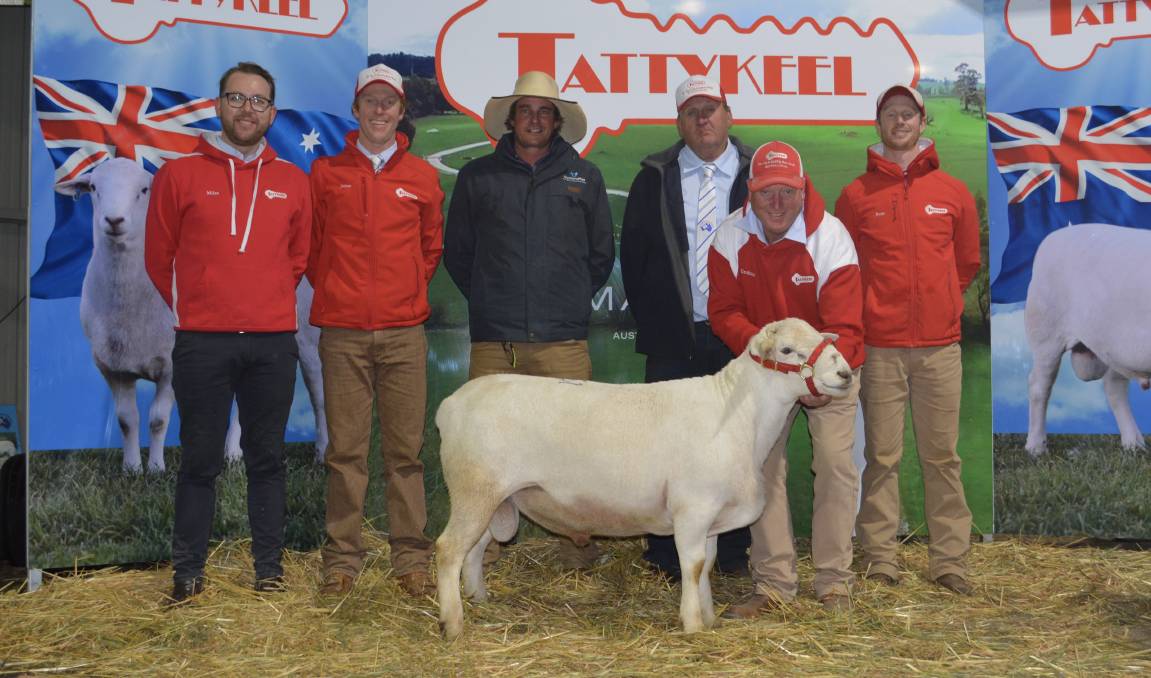 The strength of the Australian White breed continues with several record broken at Tattykeel's Wednesday sale.

The Australian White breed proved it is here to stay and it is only going to grow, with demand from producers across all mainland states pushing prices into never before seen territory at the 8th annual Tattykeel Australian White Sale at Black Springs on Wednesday.

In the largest offering of Australian White animals, 398 lots went under the hammer with the full clearance culminating in what is believed to be an industry record gross of $5.628 million.

But the records did not stop there, with the Gilmore family again making their mark several times in the history books in what has been termed the sale of the century.

Buyers and spectators in attendance and online were left in shock when the lead ram of the sale, Tattykeel 'White Gold' ET 200131 (Tw), sold for a new meat sheep all-breeds record price of $165,000.

The six-figured individual more than tripled the previous Australian White ram record top price of $53,000 set at Tattykeel's 2020 sale, and matched a number of high prices being paid for bulls in recent months. As the bidding opened, the $50,000 reserve was quickly surpassed, hitting six figures in a flash, with the final bold bid of $165,000 eventually being placed by online buyers David and Natalia Ellingsen, Flaxley Australian White stud, Flaxley, SA, through AuctionsPlus.

FROM EARLIER: Tattykeel sets new $165,000 record at on property sale

Not only did the $165,000 record-breaking ram sell through AuctionsPlus but a total of 148 lots, or 37 per cent of the offering, sold via the platform to buyers from NSW, Victoria, Queensland, South Australia, WA and the Northern Territory.

"His shape, depth, head - he looks like an ideal Australian White ram - and he has a good pedigree behind behind him," Sheren Salehi said.

Previously living in Sydney, the Salehi family moved two-and-a-half years ago to Narrandera and have tried a number of sheep breeds, but found the Australian White the best.

"There is nothing to compare," they said. "We have 3000 (commercial) Aussie Whites but now we are going for a stud.

"We went for Remington and Trump bloodlines, and unjoined ewes which will allow us to complete an embryo transfer program within the next two months using the ($120,000) stud ram," Ash Salehi said.

Two rams sold for $90,000 including Tattykeel 201675 (Tw), a September-drop son of Remington, purchased by David Brennan, Brendarey stud, Donald, Vic, and Tattykeel 201571 purchased by an online buyer from Sale, Vic.

Volume buyers in the flock ram section included Matthew Zimmer with properties at Cobar and within Victoria, 21 rams to average $13,143, James Heriot of Hellfire Trading, 20 rams to a $13,200 average, and Michael Coggan of Elders Yass put together a draft of 13 rams to a $17,077 average. 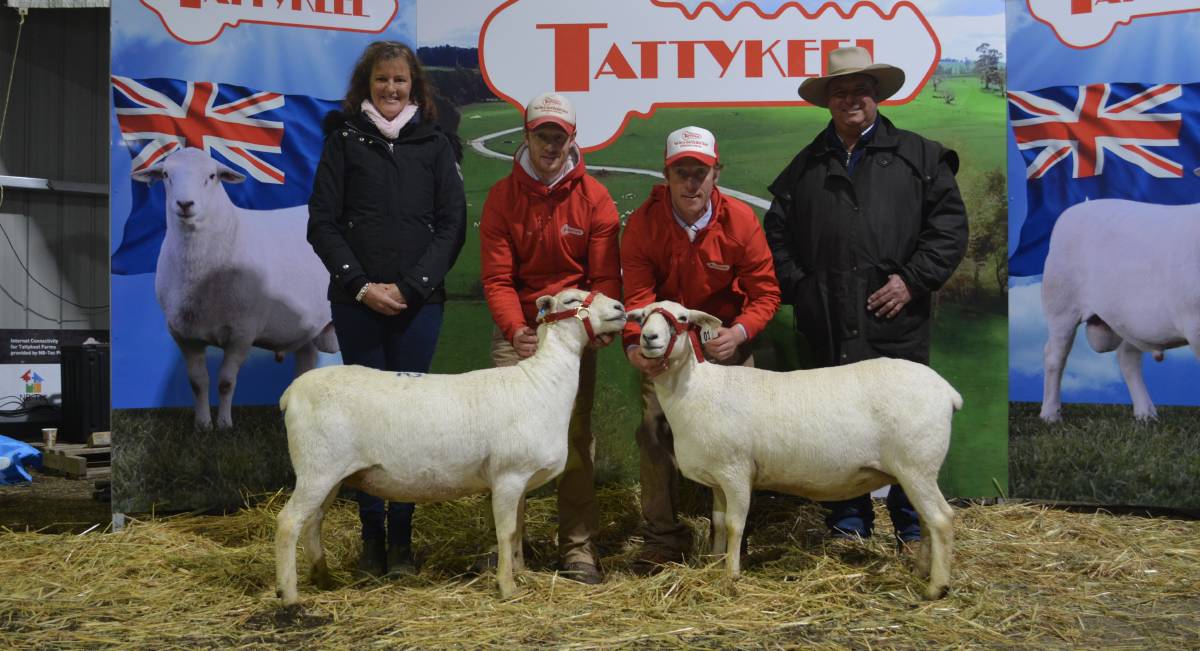 An April 2020-drop ewe, Tattykeel 'Rose Gold' ET 200132 (Tw), which is a full sibling to the six figure making rams sold for the $24,000 top price in the stud ewe section. This is also believed to be a record price for a meat sheep ewe sold at auction.

Scanned-in-lamb (SIL) to 'Bullseye', she was purchased for $24,000 by repeat clients Rob and Justine Aitken of Aitken Australian White stud, Bundarra.

"We were after the nicest ewes we could find which will enable us to start an ET program with early next year," Mr Aitken said.

"Last year we bought rams and ewes, and this year we wanted to come home with the top ewes and we did that - they were a good buy. We bought four total, including three of the top-priced ewes over $13,000."

They averaged $18,500 across their draft of four SIL stud ewes.

The Gilmore family expressed a sincere thank you to the entire Tattykeel team and all the underbidders and successful buyers in the shed and online, as well as those that have showed support over the past few years.

"I'd like to thank all of you people that have come into the Australian White breed," Graham Gilmore said.

"A lot of us have received criticism... but we are in the lamb industry and I truly believe this breed can be the dominate meat sheep breed in Australia in no time.

"We will continue to do everything we can to make the breed stronger and stronger, and promote the red tag system, because I cant see any way the Australian White breed won't continue to grow and grow and grow.

Mr Gilmore commented that they are getting people out of the wool, cropping and cattle industries showing interest or starting off in the breed.

"This is nothing against any of the other industries. This is just adding value to what we are doing to produce a wonderful meat product," he said.

"We've just been backed by CSIRO to go into another $725,000 project over two years to continue to develop the eating quality of the breed.

"It is an unbelievable product - what we have is not just an easy care sheep that works, but an animal that eats well and in a very short time will be proven to, on the carbon side, be very carbon neutral compared to anything else you could run."