The Queensland-based operation offered and sold 70 Australian White ewes and rams at its first NSW sale at Inverell. 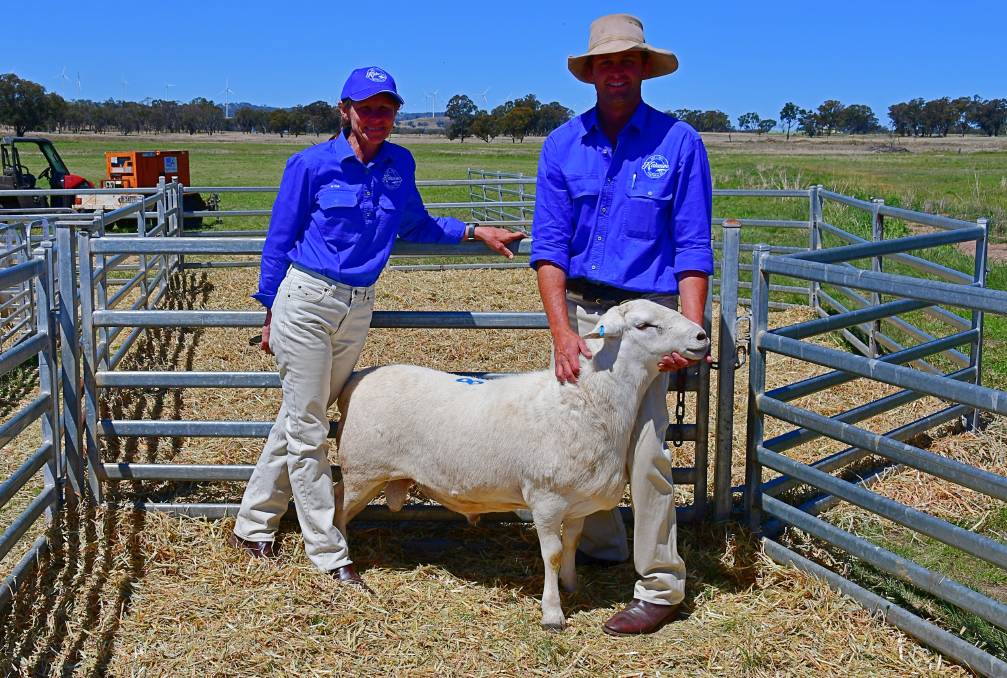 QUEENSLAND based breeders Kahmoo Pastoral Company has made a splash on the southern side of the border with its first Australian White sale at Inverell on Wednesday.

About 20 registered bidders gathered at the Cunnumulla operation's property Lochbuie while more than 40 bidders followed the sale online via Elite Livestock Auctions in the hopes of getting their hands on the 20 stud flock ewes and 50 stud flock rams up for bids.

The competition for ewes from buyers at the sale was fierce as all 20 were snapped up at an average of $1647 with only two purchased online.

However, the virtual bidders dominated the ram section of the sale, accounting for 34 of the 50 rams, which also achieved a perfect clearance rate at an average of $3149.

The ewe was also sired by the 180732 ram, was born between August and December 2020 and was purchased by Paul Simpson, Arglen, Inverell.

"I'm a commercial breeder but I am firm believer that if you are going to have a sheep, you may as well have a good one and these are good sheep," Mr Simpson told The Land.

"I intend to run about 120 ewes with Tattykeel blood as the line with some overswing from good females like these ones.

"Their temperament is really good, they have magnificent growth rate and given I have pretty much retired, they are a fairly low-maintenance breed for someone like me."

The top-selling ewe was one of three Mr Simpson purchased at an average of $3000.

Kahmoo Pastoral Company's Kym Thomas said she the entire "Kahmoo crew" were ecstatic with the results given the operation came to Inverell on a search for water during South West Queensland's drought in 2018.

"It's our first sale ever and we are just so grateful for everyone's support," Ms Thomas said.

"We came here in 2018 chasing water just like everyone else, we were looking to reduce variability, to help the stud grow and starting in a drought was a great way to start because you learn the sheep can handle it.

"They grow well in Cunnamulla and it's really pleasing to see that's the case here in Inverell as well.

"We're so appreciative of everyone's support and for us it is a real team effort, so it is really pleasing to see the rewards and we can't wait to be back again next year."