One Coolah family implements holistic planned grazing and the help of some happy hens in a whole-systems approach to farming. 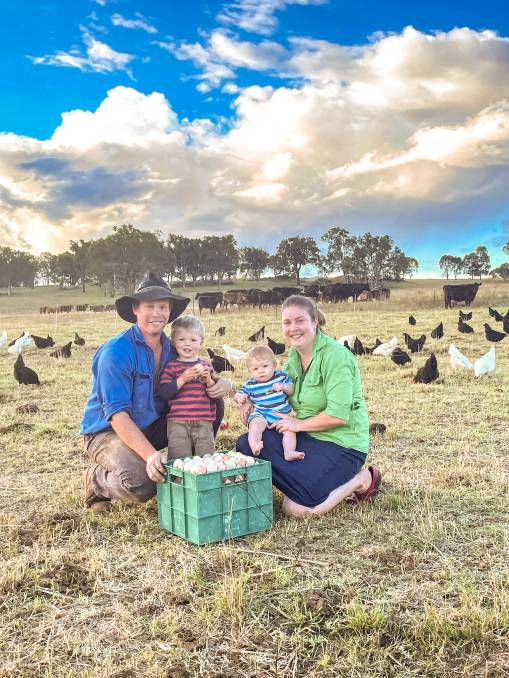 Clayton and Krystal Leven, together with Clayton's parents, operate the mixed farming enterprise, The Willows, at Coolah. Pictured with sons Weston and Karl.

IN the Coolah Valley, the humble chook has undergone a transformation of sorts.

Within the space of 12 months, its joined cattle and sheep grazing in the paddock, to become the cornerstone to one young family's entire regenerative farming system.

Clayton and Krystal Leven, together with Clayton's parents, operate the mixed cattle, sheep and cropping enterprise, The Willows.

There they join 75 Angus breeders to a Shorthorn bull, and run 550 Aussie White breeding ewes.

While it's still early days in their regenerative journey, they are implementing holistic planned grazing methods, using no-till equipment and sowing diverse cover crops in what Mr Leven described as a whole-systems approach.

"In the end, our aim would be to leave the land in a better way than we found it. Soil health is key to that," Mr Leven said.

"I think conventional farming practice tends to be a reductionist approach, where you pull things apart.

"You can do that with an internal combustion engine, you can diagnose the problem by isolating something. But with the soil you have to work with everything as a whole."

And work with everything, they have.

Mr Leven said that over the last year they had added 280 Australorp/ Rhode Island Reds and Leghorn/Rhode Island Whites to the equation.

"They fit very neatly into the system. They're basically a sanitation crew," he said.

"They follow behind the cattle and sheep, spreading the dung.

"They eat the fly larvae, any bugs, and fertilise the country a bit more."

With the average bird excreting up to 80 kilograms a year, that's 60kg of manure being spread across the Levens' paddocks daily.

Mr Leven said the results spoke for themselves.

"We started to notice that where the chooks had been, grass appeared more healthy and lush," he said.

"When I let cows out into a section where they'd been, it was like a scrum. The grass was that high and sweet, it took five minutes to push them off it."

Coolah Valley Pastured Eggs have proven popular with local retailers, and are being sold further afield at Mudgee and Gulgong.

"We never went into the chooks to make a lot of money. Our eggs are just a very nutritious by-product that people want and we try to sell them as low as we can," she said.

"Our chooks will produce lesser eggs but more consistently for a longer laying life, compared to the ISA Brown, and will forage more naturally."

"We want to sell eggs at a reasonable price so families can afford them," she said.

"Outside of Coolah, we have struggled to find store owners who would stock and sell them fairly. That's when we decided to sell direct."

The Levens are currently doing a weekly delivery run to Mudgee and Gulgong areas until suitable retailers can be sought.

"As soon as profit becomes more of a driving factor than your values or ethics, you run into trouble," Mr Leven said.

"At the end of the day we want to supply our children with something, but we also want to supply nutritious, safe produce to everyday people and to leave the land in a better state than we found it."