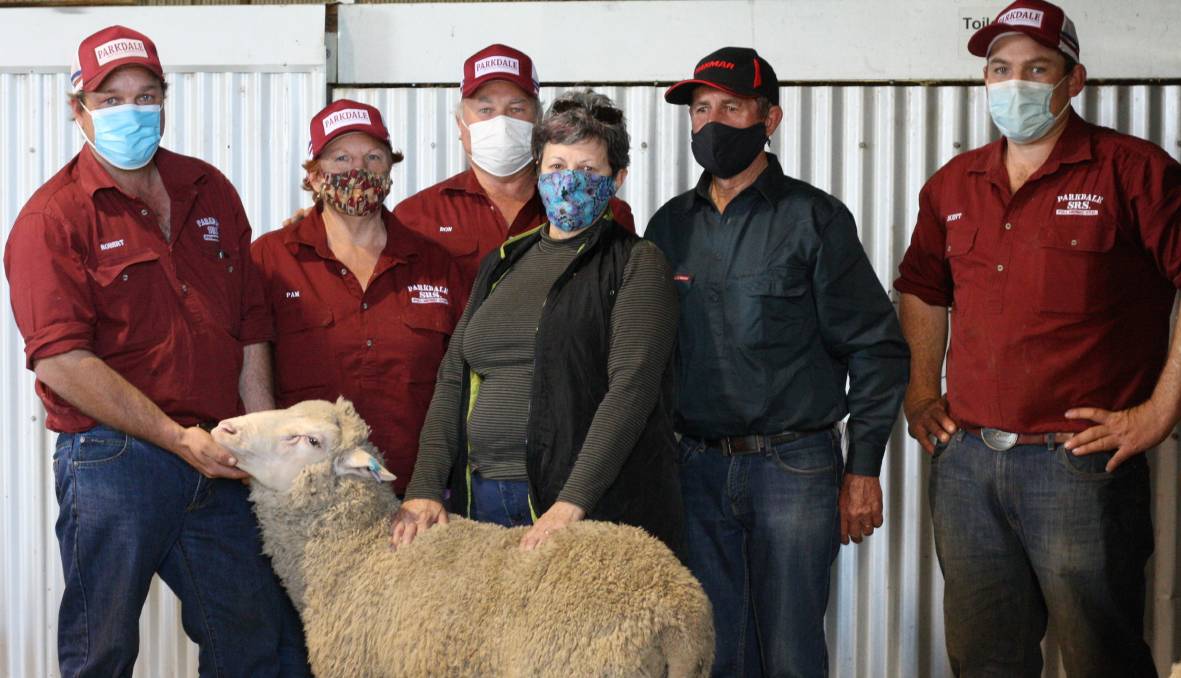 Robert, Pam and Don Mudford with purchasers Carol and Graham Green, Cobar, and Scott Mudford, with the short-tail Merino ram, Parkdale 200076, which sold for the second-top price of $5200.

PUSHING the industry envelope with a focus on half-length tails has paid dividends for Dubbo-based Parkdale SRS Merino stud.

Vendor Don Mudford said short-tail Merinos were the highlight of the day, attracting spirited bidding from the western woolgrowers.

Since then, he said the stud had produced plain-bodied, bare breech sheep with a fast-growing, well-aligned staple.

A triplet son of Parkdale 161489, he had Australian sheep breeding values placing him in the top 20 per cent of the breed for post-weaning weight, yearling body weight and yearling staple length, and in the top 10pc for yearling fat.

He had fleece measurements of 17.9 micron and a 99.9pc comfort factor.

The second-top ram, tag 200076, was also short-tailed and came later in the draft.

A triplet son of Parkdale 150610, the 12-month-old had Australian sheep breeding values placing him in the top 20pc for yearling eye muscle depth and in the top 10pc for post-weaning weight, yearling body weight and yearling fat.

He had fleece measurements of 18.9 micron and a 100pc comfort factor, and was sold to Graham and Carol Green, Cobar, for $5200.

"It was very interesting to see buyers congregate around those short-tail rams towards the end of the draft," Mr Mudford said.

"Together, the 10 or so on offer would have had the highest average of the sale."

Mr Mudford said that selecting for genetic fat traits had been another key to the stud's success.

"But in the meantime I think the biggest issue for our industry at the moment is lamb survival. The single largest factor to saving lambs is to select for genetic fat, and we've been doing that for 12 to 14 years.

Among the gallery of buyers were both new and longtime clients, with one first-time and several returning buyers purchasing rams in volume. The sale was conducted by Hartin Schute Bell, Narromine, and was interfaced with AuctionsPlus.