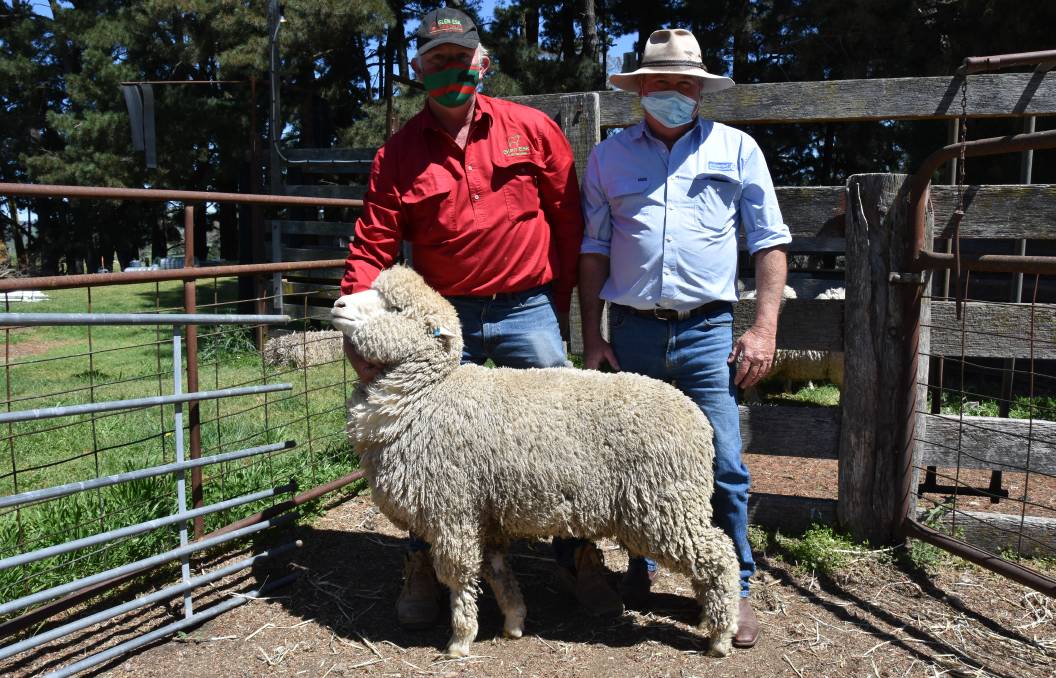 Glen Esk Corriedales principal Rick Hoolihan, Rydal, with Brett Douglas of Schute Bell Badgery Lumby, Canowindra, and one of the rams that sold for $1500.

Corriedale rams sold to a top of $1500 a head three times during the Glen Esk Corriedales on-property sale near Rydal on Saturday.

CORRIEDALE rams sold to a top of $1500 a head three times during the Glen Esk Corriedales on-property sale near Rydal on Saturday.

The sale was conducted using the Helmsman selling system and was also the first year the stud had conducted an on-property sale.

All up 29 rams were offered and two pens of five stud ewes.

Seven rams were sold during the sale and although stud principal Rick Hoolihan was disappointed not all rams were sold, he was pleased with the top price of $1500.

"It's our first year holding a sale like this and we are a bit on the edge of the sheep country, but we wanted to give it a go," he said.

He said the two pens of ewes were sold

The top priced rams were all in a bunch near the front of the offering and bought by the Toohey family of Golong Partnership near Cowra.

"They are using the Corriedales over a Dohne based flock," he said.

"By doing this the family are aiming to produce second and third generation crosses."

The figures for 200117 were impressive with wool that measured 26.2 micron, a coefficient of variation of 21, standard deviation of 5.5 and comfort factor of 77.7.

"It's exciting that we are now to the point where we are offering the grandsons of the New Zealand bloodlines in this sale," Mr Hoolihan said.

Four rams were also sold to the Squires family at Peak Hill for $900 each.

Two of the rams bought by the Squires family stood out among the draft as sons of Glen Esk 152038.

"We've really been paying attention to the SD and CV and I think that hard work is reflected in the rams we've offered this year which are the best so far," Mr Hoolihan said.

The Helmsman sale was conducted by Schute Bell Badgery Lumby.