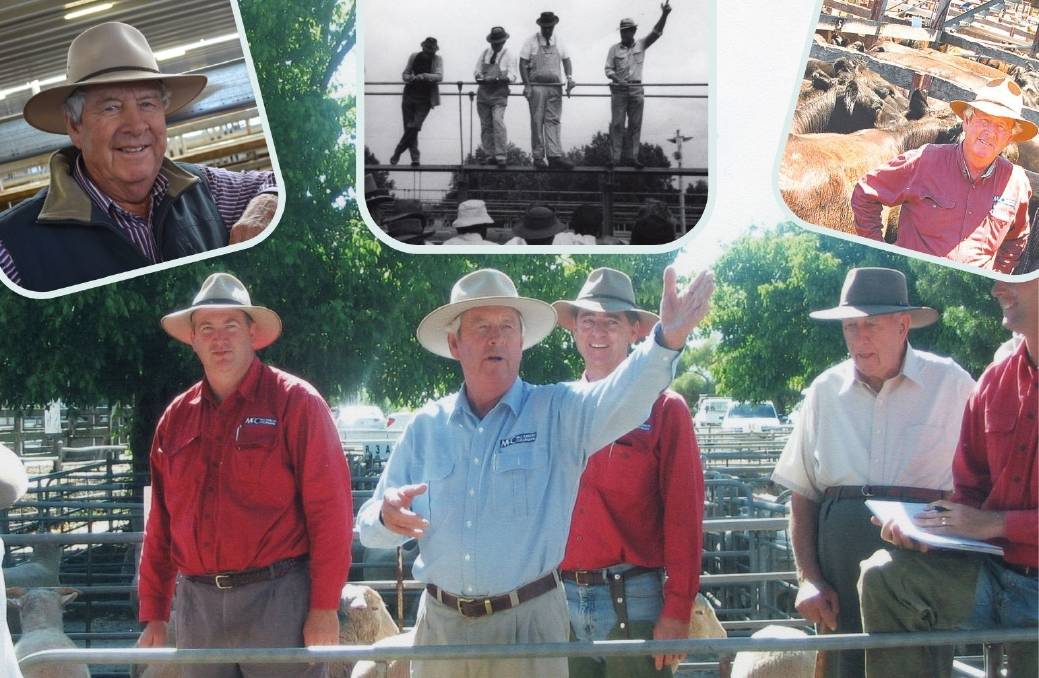 The many faces of Brian Cullinane, including (main image) selling the last pen of lambs at the Orange saleyards in 2008.

He made his name as one of the most accomplished livestock and property auctioneers in NSW - and this month he celebrates 60 years as a rural agent.

IT SHOULD come as no surprise that Brian Cullinane - long-time stock and station agent and co-founder of McCarron Cullinane in Orange - is quick with an agricultural image.

When he joined Dalgety in Orange in 1961, he was under Ken McCarron's guidance - and, he admits, "I needed plenty of guidance back in those days".

"I was like a young dog - I was everywhere, but perhaps not always where I should have been at times. I enjoyed what I did and I loved the job."

But that's starting the story in the middle.

Though Brian is an Orange identity, he came to the district via New Zealand (where his family had stud sheep and dairy cattle).

Brian had managed a property in NZ before he came to Australia on a working holiday and found himself at Collarenebri.

He had only a short stint working on a property there, from April to October, but it made a big impression on someone used to the landscapes of the Long White Cloud.

"That was the greatest eye-opener to me because I'd never worked with Merino sheep and I'd never seen paddocks as big as they were," he said.

He joined the staff at Dalgety Orange in late 1961 and by June 1968 was appointed Orange branch manager.

"The saleyards were totally different back then," he said.

"You were out there in the elements, there was not much shelter. These guys in the modern saleyards don't know they are alive!"

He married, Robyn, and they had four children. Just as with all agency wives, Brian paid credit to the big part Robyn played in raising their children and supporting his career.

"She knew all the clients and was a wonderful support to me." he said.

His big break came when the auctioneer Lance Blowes left the company, creating an opportunity for Brian to step into that role.

He was offered the position of regional manager of the New England area in 1972 but declined the job because he didn't want to leave Orange.

And so, in conjunction with his long-time associate and friend Ken McCarron, McCarron Cullinane was born.

"They [Dalgety] probably weren't really happy with us as we took many of the Dalgety clients with us," he said. "People follow personalities, they don't follow a name because it's got Dalgety's on the window."

McCarron Cullinane was a trailblazer in terms of a private agency in the district and over the years, Brian said he's worked with some capable and supportive people, including Denis Tyson, John Cullinane, Peter Ethridge, Daniel Brock, Lloyd Baker, Max Livingstone along with many others.

Brian sold McCarron Cullinane in 2002 knowing it would pass into the reliable and strong hands of Lyndsay and Heather Fryer and Darren and Vanessa Connick. "Having worked with these people I know the company is in good hands," he said.

As well as livestock marketing, McCarron Cullinane was a big player in property sales and sold many well-known properties.

Properties such as Wellwood and Summer Hill, originally owned by the explorer Wentworth, for example, were marketed by McCarron Cullinane and, at the time, had only changed hands once before in its history.

The property side has become Brian's main focus in recent years and he paid tribute to his second wife Pat's enormous support particularly as a wiz with the technology part of the job.

"Loyal clients have also played a big part in the success of the business and I can't thank those people enough for their support over many years," he said.

Brian has an encyclopaedic knowledge of the old Orange saleyards - including the fact they were closed briefly in the 1960s, well before CTLX, Carcoar, was even a twinkle in someone's eye.

In that decade, he said, there was an unsympathetic Council "which was of the opinion Orange didn't need a saleyards".

"The council didn't appreciate how much the rural community meant to Orange. The dispute got so serious that the council closedthe yards.

Ken McCarron and other agents were so affected by it they stood for council and opened the yards again."

He said Orange was a major selling centre.

"Orange was bigger than Bathurst back then and Bathurst only really got bigger when they closed Homebush [saleyards].

"When they closed Homebush, all the Oberon stock went to Bathurst. All the buyers from Lithgow and Homebush had to come to Bathurst and Orange and most of the stock we sold at Orange was transported to Homebush abattoir by rail."

He said the regionalisation of saleyards was a must for Orange, once Dubbo and Forbes got bigger, there was nowhere for Orange to expand. With the creation of CTLX, Carcoar, (where Brian sold the first pen of sheep at the official opening), he said "buyers were no longer travelling between Central Tablelands saleyards".

Brian remembers the introduction of decimal currency in 1966 and the challenges of switching to selling in dollars.

He said the older auctioneers found it much harder than the younger ones to make the transition.

Liveweight selling was introduced in the 1970s, replacing the sales in dollars a head, and was another interesting challenge.

"In Orange, we weighed the cattle before the sale, whereas all other centres did the weighing after," he said.

"We did it that way as Orange was an afternoon sale, so we had time to weigh the cattle in the morning."

During the 1970s and 1980s, Brian helped train young auctioneers via NSW Stock and Stations Agents Association and judged the competition a few times at the Sydney Royal.

But, of course, not all his memories are good: Brian said one of the worst times was in 1991 when they were shooting sheep with no value due to the market collapse.

He has many memories of an Orange that bears little resemblance to the current city of laneway cafes and high-end restaurants.

"In my early days, stock were both walked and railed into the Orange saleyards. Stock were often held in surrounding travelling stock reserves and shepherded by drovers until sale day arrived," he said.

There were a number of large dairies south of Orange, he said, which are now dispersed.