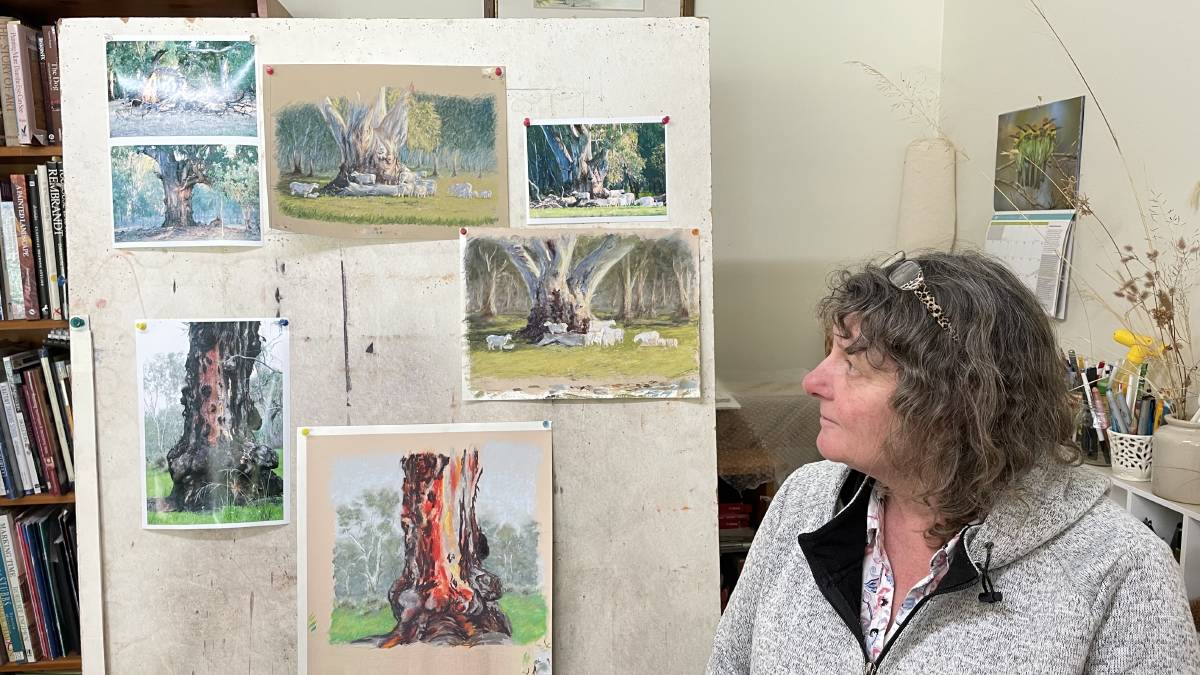 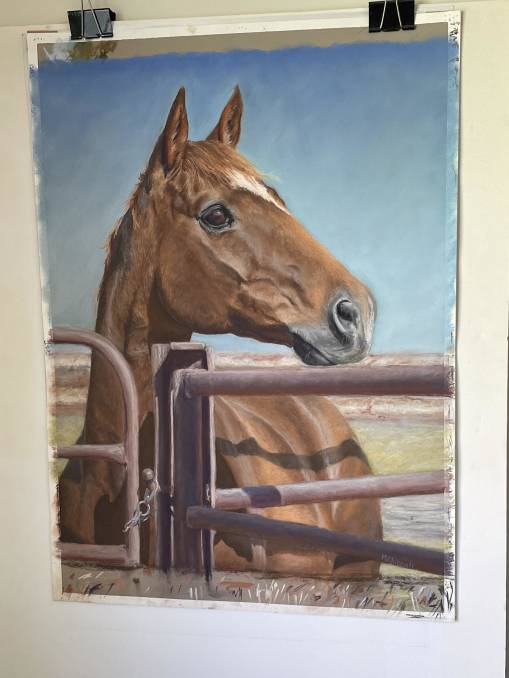 The exquisite detail in the portrait of a favourite horse is typical of the amount of attention Michelle Chibnall applies to her paintings.

I'm an artist first before I became a farmer - Michelle Chibnall, Narrandera

"I'm an artist first before I became a farmer," Michelle Chibnall replied when asked about her career procession; although she did admit, with the ewes lambing at the time of interview in September, to being a farmer before having time to apply her talent to the paper.

She was sitting in her studio in a back room of the house sited on the small farm west of Narrandera and running alongside the Yanco Creek, where various unframed paintings and sketches adorn the walls and easel.

Naturally, the rooms and hallways of her home are also adorned with finished portraits of family and beloved animals.

Michelle shares the farm with her husband Peter, a truck driver, and a flock of Australian White ewes share equal billing with the Quarter Horses among the river red gums.

The scenes Michelle takes in each morning, as she walks among the lambing ewes, creates inspirational visions, and she carries a camera to record those feelings for future artistic endeavours.

And while her husband Peter has always been a farmer, Michelle grew up at Waitpinga in South Australia, in a small community where artists did not necessarily leave an impression by making a living out of art although there were many with an artistic bent in the area.

"I was working as a picture framer, but I have always drawn pictures and probably from the time I could pick up a pencil," she recalled.

"Mum made a few pictures with pen and ink and she was an inspiration but I've never been able to stop ... it's just in me."

Michelle further explained her mother's pen and ink drawings where inspired by the illustrations and advertisements in newspapers she read while she was growing up.

"She was pretty good at drawing horses and that is where my love of pen and wash came from," she said.

But once Michelle left school and started work as a picture framer, many of the artists she began associating with started a series of life classes under the guidance of Alfred Engel, a well-known artist who lives and paints along the coast of South Australia around Victor Harbour.

"It was really enjoyable and I learnt a lot from those classes," she recalled.

"And by the time I left South Australia I was taking oil painting classes with him."

Moving to Lake Bolac, in the Western Districts of Victoria, Michelle continued painting whilst raising a family.

"It was mostly for myself but when I was introduced to Steve Morvell, an artist in Ballarat who I followed in an Australian artist magazine, The Australian Artist, I started going to Ballarat once a week for more lessons," she said.

"He is an artist who focuses on wildlife and animals, and for the next couple of years I studied with him. He took my art to a different level.

"I also moved from oil to pastels under his influence."

After nearly ten years at Edi, in the north-east of Victoria where Michelle had the good fortune to meet many likeminded artists, she and Peter moved to the property west of Narrandera, in 2016.

"I am very grateful for the friends I have made over the years through art," she said.

"The social side is as good as the art.

"And here at Narrandera, you wouldn't believe how many talented artists there are in the shire ... the Riverina is alive and well with artists." 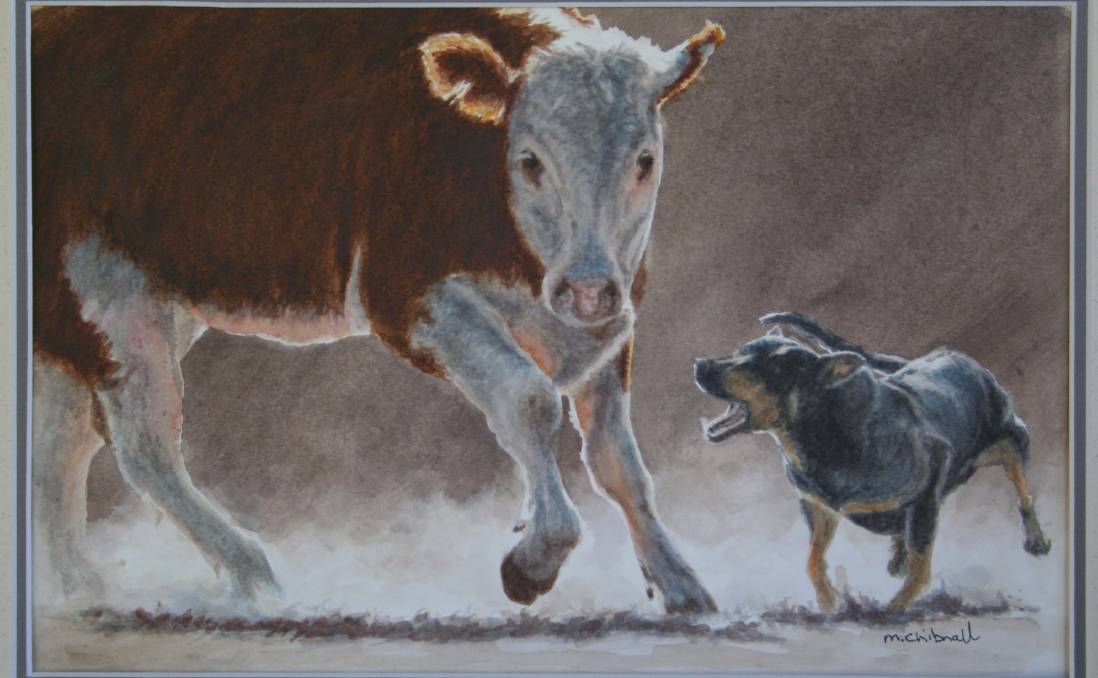 Under control: a pastel painting by Michelle Chibnall. Photo: supplied

When considering those artists who have inspired her, Michelle immediately thought of Beatrix Potter, the English artist whose whimsical drawings of anthropomorphic animals have been adored by and enchanted generations of children of all ages.

Other artists to whom she gives credit are Frederic Remington, the American painter and sculptor whose depiction of cowboys, horses and cattle made some contribution to the idea of a wild American west, and George Stubbs, the eighteenth century English artist who made the painting of horses his own.

The gum trees painted by Hans Heysen have also had a hold on Michelle's imagination, but she keeps referring back to her favourite subject.

"I have always preferred to paint animals," Michelle said.

"At first I was doing animal portraits... I was doing Bassett Hounds for a while for their owners which were sent to America and then I did a portrait of a horse which was sent to England... but all the time I was trying to get as good as I could." 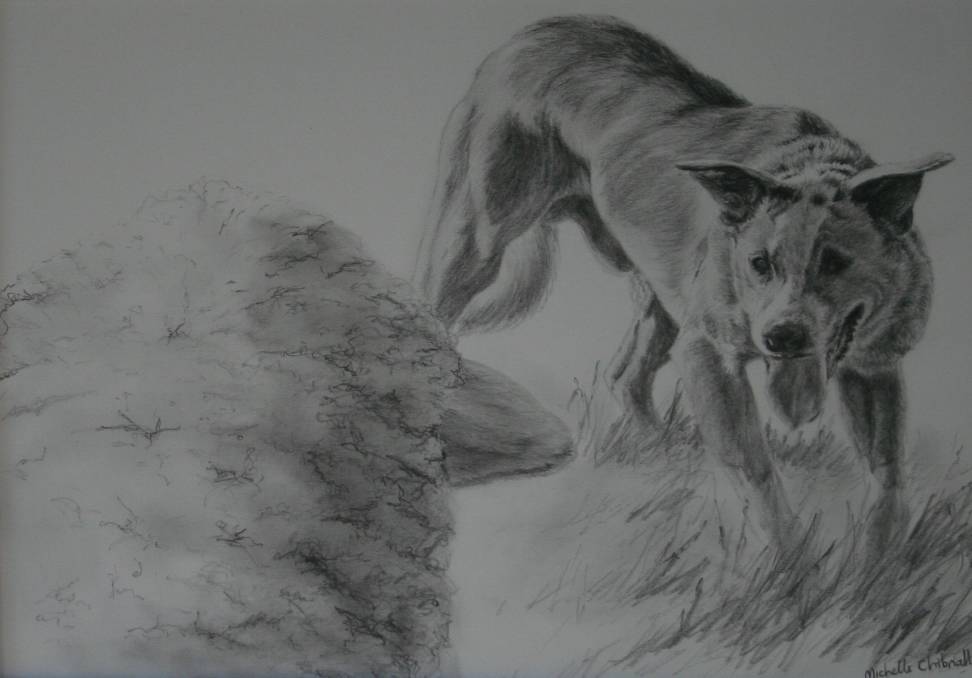 Pastel painting of a scene which would be familar to many shepherds. Photo: Michelle Chibnall

Other than the intention to paint a series featuring the Australian White ewes and lambs among the river red gums, Michelle has been commissioned by neighbours Richard and Jane Carter, Billagaboo West, Narrandera, to paint a portrait of one of their favourite Corriedale rams, a show winner with an impeccable pedigree.

This is not the first sheep Michelle has painted, and sited against the backdrop of the Yanco Creek on the Riverina plains, she is entranced by the early morning light which plays upon her subjects in various ways according to the time of day and the weather.

"I take photos where the light is hitting the sheep in a certain way or the animals are interacting with each other and I make cards of those scenes and when Jane and Richard saw them, they approached me," she said.

With that commission, Michelle is making the connection with the Riverina where many famous sheep studs had been developed and which formed the backbone of the colonial economy.

"It puts a new perspective on my painting career," she said.

"I don't mind portraits of people, but do feel more comfortable with nature and animals."