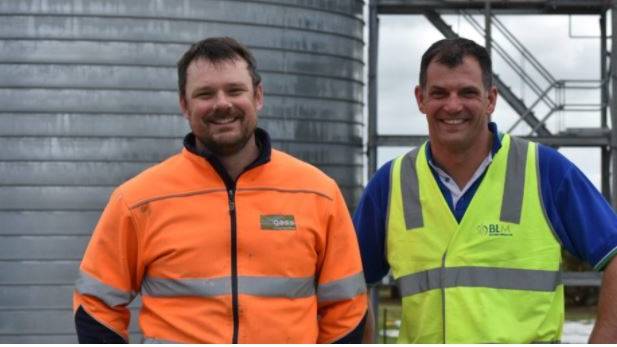 A Bordertown mill is gaining value from a product previously consigned to waste, using oat husks to power a biogas plant.

FOR years oat millers have turned out oat husks as they process the grain for human consumption.

While the husks are generally thought of as a waste-product, one innovative mill in south-east South Australia is converting the husks into biogas, thus covering nearly all of its electricity costs, a big business cost for all mills.

Company projects manager Jeremy Neale said the plant would generate enough not only enough bioenergy to power the plant but also nearby homes.

"Two-thirds of it will go to the mill, and the remaining third will be put back into the grid," Mr Neale said.

"It'll go a fair way to eliminating our electricity bill."

And eliminating that bill is a key part of boosting profitability at Blue Lake.

As a 24-hour, five-day-a-week operation, the mill's current monthly invoice totals about $80,000.

Mr Neale said it was not cost, but rather reliability of power, which first led the company to investigating the biogas concept.

He said issues with power reliability first sparked the need for an alternate source more than a decade ago.

"Every time we've looked at doing an expansion, power was a limiting factor," he said.

"So the way around that is to obviously generate your own."

Neale said the biogas plant would allow manufacturing to continue in the event of an outage, and that given the location, in the far east of the state near the Victorian border, that was a distinct possibility.

"Being (located) at the end of the power line we have a lot of brownouts," he said.

Established in the 1980s, the Bordertown branch of Blue Lake employs 120 people in a town of less than 3000.

The mill processes more than 24,000 tonnes of oat husks each year as a by-product of its production.

Until now, the husks have been sold as stock feed, used as packing material or sometimes just thrown away.

The new biogas plant converts the husks into bioenergy through the process of anaerobic digestion where microbes break down biodegradable material into mush, with the subsequent biogas created as a result a mix of methane carbon dioxide.

This is used to heat and power the plant.

Blue Lake now has zero waste on its oat husks, which will all be put back through the biogas plant if there are no superior markets available.

The plant is just one of five of its type across the country, but the system is common in Europe.

Mr Neale looked at a number of similar plants in Germany, home to more than 15,000 such facilities.

He said Blue Lake's plan to use solely oat husks as a feed source for the plant was met with scepticism.

"They all told us we were crazy," he said.

"There's existing plants with oat husks being fed in but none with it as a straight diet, so it was obviously a bit of a risk."

The plant may spur a number of similar developments.

CBH is closely monitoring the performance of the Bordertown development to assess the potential for similar systems across other facilities.