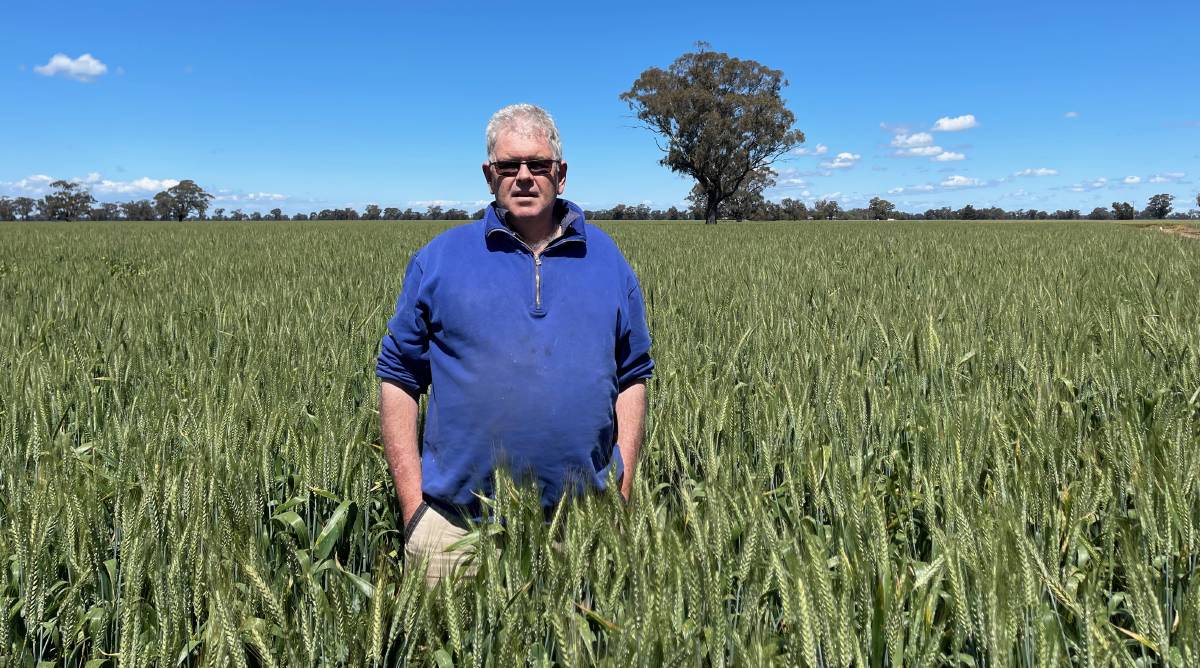 Craig Marshall, Redbank, Rennie with his Kittyhawk variety wheat crop this year, which he hopes will yield 6.5t/ha. It's been a wet spring so far.

It's not bad winning an award for a hyper yielding crop, but there were some basic management methods that led Craig Marshall, Redbank, Rennie to win one of the categories.

His 2020 scepter wheat crop yielded 6.71 tonnes/per hectare, with a potential yield of 7.77t/ha, measured on the amount of rain he received. It was a dry end to the 2020 season, so the result was a welcome surprise.

Some of the key elements to his farming has been a long history (over 25 years) of no-till on the flat red loam country in southern NSW.

"It was still yielding high despite an average spring. We were really pumped knowing it could even have gone higher," he said. The paddock of the award-winning crop had 75mm in March, before sowing, then from April to the end of October 320mm.

Keeping moisture in the soil was paramount and this was done with a strong summer weed eradication program on this well-drained paddock. "The key thing is storing moisture during summer," he said.

"We've been sowing early in the window (May 12, 2020 at 80kg/ha), so timely sowing and also timely weed control, with pre-emergent chemical put on the crop (Sakura), with a fungicide in it, then a broadleaf spray in the year."

Timely fertilising was important with 8kg/ha of MAP at sowing, then in June 100kg/ha urea, broadcast on the crop, and then another 100kg/ha in August. The 164ha crop was harvested on December 15. Its rotation history was barley in 2018 and canola in 2019.

This year has been a lot different for his barley and wheat crops with close to 100mm alone in September, with more this week. He believes the barley will go 6t/ha. He was confident that some nitrigen was left over in the crop for this year but Mr Marshall said the high cost of fertiliser will force many growers to make some tough decisions next year on fertiliser usage.

"The Hyper Yielding Crops (HYC) Awards recognise growers who have the enthusiasm and clear vision to accomplish high productivity goals, through making effective agronomic management decisions, at the right time, according to their location and environment," a release said.

"This awards initiative was developed as part of the GRDC's hyper yielding crops project, a four-year investment, spanning five states, which aims to push the economically attainable yield boundaries of wheat, barley and canola. HYC project officers in WA, SA, VIC, TAS and NSW sought nominations of 10 wheat paddocks per region which in turn allowed growers to benchmark the agronomic performance of their crops compared to a regional standard."