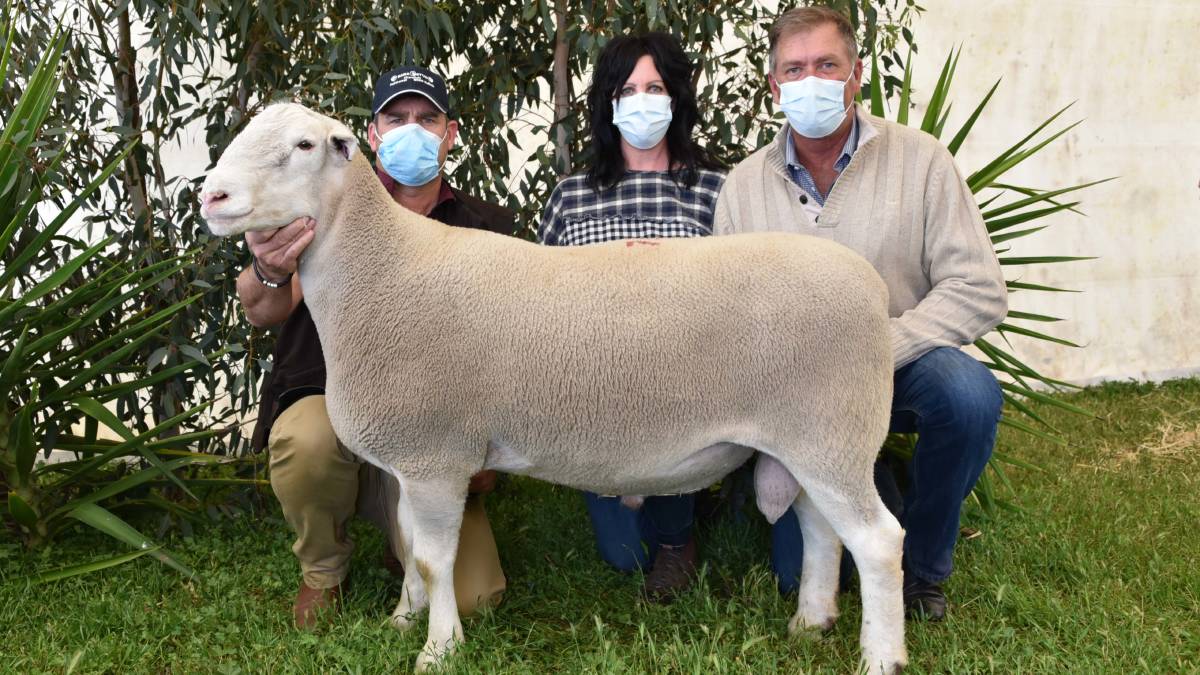 Strong demand from across the country drove the Detpa Grove White Suffolk sale to new highs once again last week.

STRONG demand from across the country drove the Detpa Grove White Suffolk sale to new highs once again last week.

In the breakdown, a total clearance of 28 stud rams topped the sale and averaged $8357, an increase of more than $1500 on last year.

The flock ram average of $1972 was also up on the previous year, and was a record high for Detpa Grove, with 149 of 152 selling to a top of $2800 three times to three different clients.

Detpa Grove principal David Pipkorn described it as a "cracking sale", with support all the way through every draft.

"Clients were looking for a balance of figures, phenotype and structure and those rams that had it all in the one package had a lot of competition," Mr Pipkorn said.

Rene principal Scott Mitchell said they were looking for a ram with a balance of structure, depth of body, and really good numbers - and they found it.

Mr Mitchell said he had been on the hunt for a ram such as this for about a decade, with the "correct shoulder set, White Suffolk type and a heap of meat".

Rene's White Suffolk stud was established from nine Detpa Grove embryos in 2005, and Mr Mitchell said they continued to hold the stud in high regard.

The May 2020-drop ram was an embryo transfer lamb by Somerset 170147 and had an Australian Sheep Breeding Value in the top 1 per cent for post weaning weight (PWWT) at 19.60, and for Terminal Carcass Production (TCP) at 161.

"It is a very high-performance ram with great type and balance, and a feature on him was sheer volume and depth of hindquarter, and amount of red meat in him," he said.

Despite COVID-19 border restrictions, there was a strong crowd in the stands, and an additional 40 registered bidders on AuctionsPlus.

Picking up the second-highest priced lot of the day was Old Ashrose stud at Hallett, SA, returning for a DG 200412 at $21,000, after purchasing stud ewes and rams from the stud over the previous two sales.

Mr Day, who picked up five ewes in total, described Lot 1 as "an exceptional ewe".

"We were looking for some different genetics, and she was a stand-out ewe in the catalogue with good balanced figures," he said.

"We purchased the ewe off the back of having a twin brother in the stud ram offering, she had very good figures and displayed the carcase attributes we were looking for," Mr Gilmore said.

Mr Gilmore said DG 200543 had magnificent carcase and balance, alongside balanced figures high in muscle, and Detpa Grove had kept a semen share in the ram.

The Branson family, Banquet White Suffolks, Mortlake, were volume operators on the stud sheep, paying to a top of $1600 for five ewes, and averaging $10,000 for two rams.

Repeat volume buyer in the flock ram offering was Craig Bennie, Edenhope, picking up 18 rams to a top of $2800 twice.

Mr Bennie, for the second year running, was purchasing rams for himself and SA agents and producers who couldn't attend the sale.

He has been buying rams at Detpa Grove for more than 25 years, joining them to first-cross ewes, and said this year's offering was "the best they've ever had".

Showing the depth of quality in the offering was the $3800 paid for a ram that was in the flock listing, but will be registered as a stud, purchased by Hopea stud, Dadswells Bridge.

Elders auctioneer Ross Milne said stud rams sold exceptionally well, with one of the highest averages of the season.

"The flock ram average of $1972 was also a really good sale, and commercial producers still got good value with some high-performance rams," he said.

"Detpa Grove has a great combination of phenotype, structure and performance data and that was certainly why we saw such strong results, with NSW, Victoria, Tasmania, SA and WA all competing on the stud sheep."

Mr Pipkorn said they welcomed a number of new clients operating on the flock rams as well as their regular supporters.

"It was really pleasing to get the clearance when we had an extra 10 rams in the sale, and we ended up passing in seven which was about right for us, we don't want people to go away with empty trailers," he said.