The average rose by close to $700 this year at the 6th annual Windy Hill Poll Dorset ram sale.

Repeat clients underpinned the sale, however they met competition from new buyers that have taken interest in the Roweth family's program that consists of around 300 Poll Dorset stud ewes and 1500 crossbred ewes.

"It is an unbelievable result, our previous top was $1600 and we've averaged over that," Mr Roweth said.

"A lot of it is attributed to the confidence in the lamb job.

"We are thankful for the support, it is really appreciated."

Only fairly new to the ram-selling game, the Roweths have been geared towards selling store lambs on AuctionsPlus and through the local saleyards at Carcoar in the aim of getting Windy Hill blood progeny out there.

"Word of mouth, and people that are seeing what the rams can do is helping us grow," he said.

"We are becoming better know, with repeat buyers coming back, people that had bought privately now coming to the sale and new clients which is promising from a growth perspective.

"This year a lot went local within 40-50 kilometres and to Forbes."

Two rams reached the $2900 stud record high, with both sold to volume buyers.

He was the heaviest ram in the catalogue weighing in at 123 kilograms with an eye muscle width (EMW) of 105 millimetres, eye muscle depth (EMD) of 49mm, eye muscle area (EMA) of 39.62 square centimetres and a fat depth of 7mm.

Long-time clients of the Windy Hill program Loloma Partnership have been buying from the stud since its first sale, this year they took home nine rams for a $2294 average.

Jason Ponds of Loloma said he was looking to source rams with good shape, plenty of length, and good feet structure which is important in their wet country.

"We've been buying the rams for a few years and the lambs do the job for what we want - we target that heavy trade market and we like to turn them off pretty quick," Mr Ponds said.

"The top ram was a good all-rounder with plenty of depth in the hindquarter, he takes your eye as you walk down the lane."

Joining around 1800 first-cross ewes, lambs are the focus at Loloma and three lots of lambs have been sold already this year through CTLX. 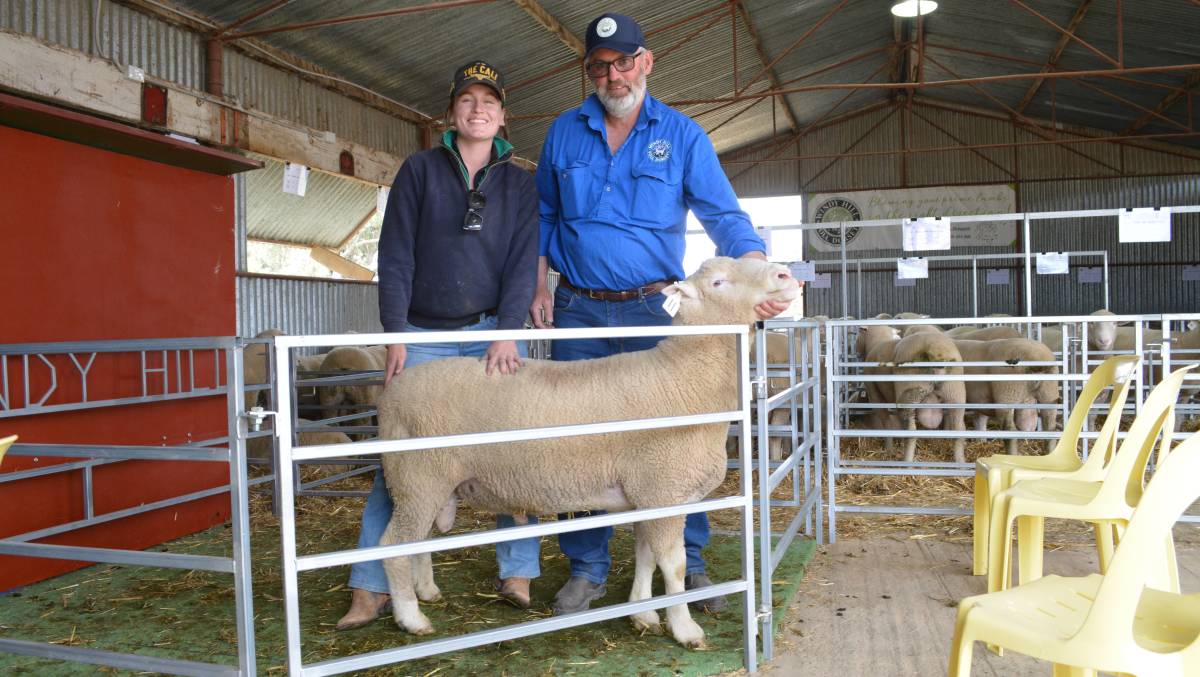 Also selling for $2900 was Windy Hill 1/20 purchased by James and Sam Freeman of Fairford, Neville.

The Freemans have previously purchased rams privately out of the paddock from the Roweths, and were looking for length and eye muscle area when selecting sire prospects to join to their 2000-odd first-cross ewes.

The sale was conducted by McCarron Cullinane, Orange, with Lindsay Fryer as the auctioneer.

Mr Fryer commended Chris and Fiona Roweth for their excellent presentation of the rams.

"There was more weight in the rams this year which helped," he said. "They presented well especially under the trying conditions and long winter.

"The lamb market is strong and repeat buyers that know the rams and what they can do fuelled the bidding, but new buyers also were active."