All 65 Australian White rams were snapped up at the on-property sale near Tamworth. 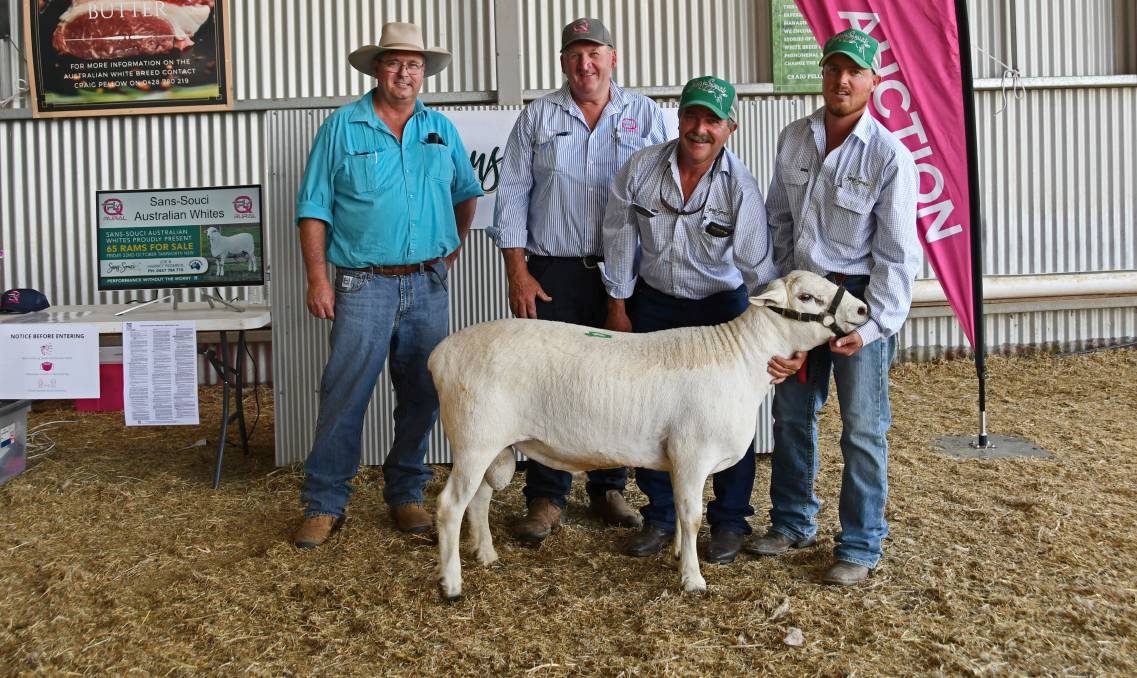 AFTER making a splash at its inaugural on-property Australian White Sale in February, Sans-Souci went one better at its second ram sale on Friday.

A crowd of more than 20 bidders gathered at the Pederick family's property at Appleby, near Tamworth, while many more followed the sale online via AuctionsPlus to get their hands on the five stud rams and 60 flock rams on offer.

All 65 rams were snapped up at an average of $3708, bettering the average of $2234 at the operation's first sale more than eight months ago.

The 12-month-old ram was a twin son of the 2019 Sydney Royal champion ram Tattykeel 180204 (Ruger) and out of Red Hill 171147, he weighed 107 kilograms on Friday after having a birth weight of six kilograms and was purchased by Rob and Justine Aiken, Aiken Australian Whites, Bundarra.

"We bought four ewes, including three of the top-price ewes, at Tattykeel's sale recently and we're going to do an ET program next year, so I thought this ram would come in handy for that.

"I really took a shine to him because I think he really stood out quite a lot.

"We're only a new stud and we are aiming to host our first sale in 2023, but I think this ram will certainly help set us up."

Sans-Souci stud principal Joe Pederick echoed Mr Aiken's sentiments, saying the ram was a true stand out of a "very even draft".

"All of the stud rams had really good weight for age, in fact, we were really pleased with all of their growth rates, but the top-seller really did stand out," Mr Pederick said.

"He's a big, growthy ram with a good body, a deep hindquarter and he's one of the top growth-weight rams in the draft for the whole drop, which is what sets him apart.

"Everyone's getting paid for kilos and he is just the sort of sheep to help with that."

Online volume buyers from as far away as Devenish, Victoria, and Allora, Queensland, helped spur on the success of the sale.

"It's really pleasing to see support come from right across the country in the form of new and existing clients," Mr Pederick said.

"We're just trying to select a type that suits the industry, those with deep bodies that are good shedding rams as well as being easy-care sheep.

"This will be our last sale here because the family is relocating to Molong, but we will continue to aim to have two or three sales a year going forward and we wouldn't be able to do that without the great work of QPL Rural, we can't thank them enough for their help."

The sale was conducted by QPL Rural, Temora with Joe Wilks, Wilks and McKean Livestock and Property, Wagga Wagga, auctioneering.