Forty or more years of Merino flock classing is paying dividends to Tom Kirk, as many of his clients bought rams at his Bundemar stud ram sale last Thursday. 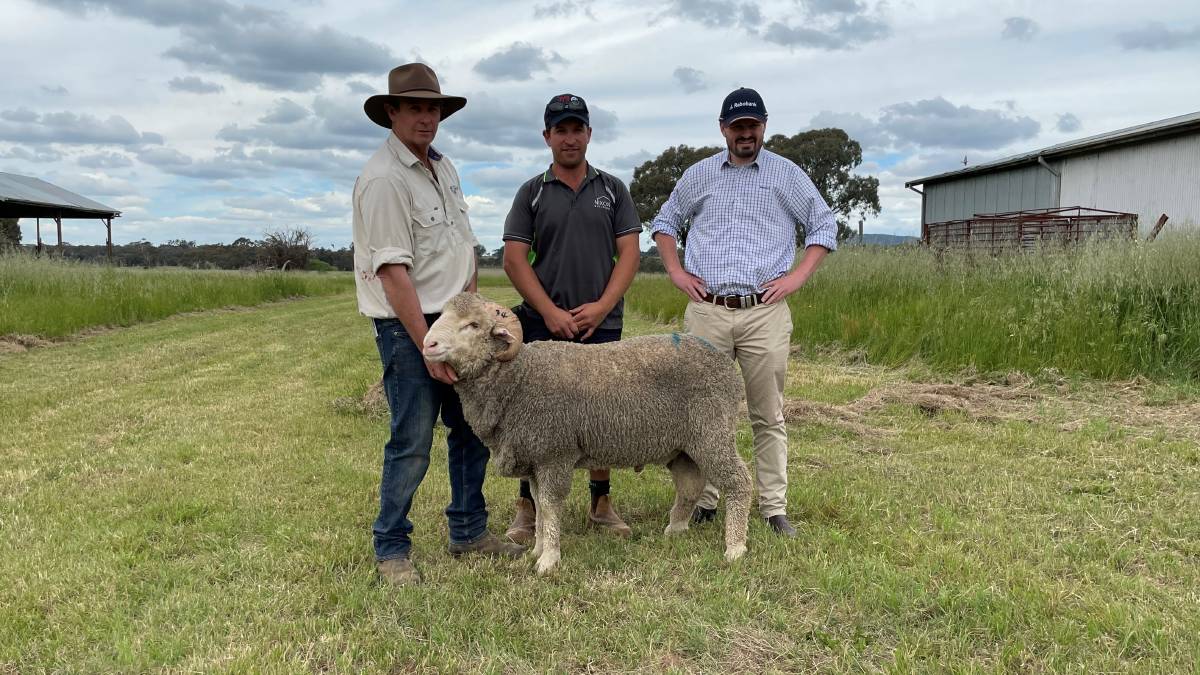 FORTY or more years of Merino flock classing is paying dividends to Tom Kirk, as many of his clients bought rams at his Bundemar stud ram sale last Thursday.

Tom and Kate Kirk, transferred their Bundemar stud from Condobolin to Emrose, Baldry, early last year and this was their second sale on the property, which cleared 42 of 46 rams selling to a top of $4000 to average $1630.

The clearance included the first rams to be sold at auction from Mr Kirk's Bundemar bare-breech breeding.

"It's good to get my bare-breech project off the ground," he said.

The program entailed some 10 years of selection and breeding within the stud to stabilise bare breech and not lower wool growing potential.

Buyer of all six rams was Terry Worthington, Four Corners, Tullamore, a client of 15 years who said the wool on the bare-breech rams was better handling and softer.

"I bought two rams last year and joined them to my Prime Samm ewes and their lambs were very good," Mr Worthington said.

The six rams selling at $1500 each will be joined to the Four Corners' Samm and Merino flock.

"In the past I joined Bundemar rams to both flocks and the resulting Samm lambs were marketed.

"But now I'll join the bare-breech rams to both flocks and breed up with their progeny."

Talking about his purchases Mr Worthington said "you can feel the difference in their wools, all six are either 100 or 99.9 per cent comfort factor."

James and Elise Nixon, whose Leewang flock at Yarrbandai has won or placed in the Ted Little Memorial ewe competition in each of the past two decades, paid the $4000 top price while buying five rams for a $2360 average.

The sale-topper was an 18.4 micron with 99.7 comfort factor which will join the sire battery on February 14 when their 1000 ewes begin joining.

"Tom started classing here for my grandfather (Will) and father (Grant) when he was 18 and just out of school and followed him from Pine Park and Condomar studs, then Bundemar," James Nixon said.

Buying at their first Bundemar sale, Rob Neal with daughter Louise and Alex Wells, Lockerbie, Condobolin, secured eight rams paying to a top of $2500 and $1663 average.

Mr Neal said Tom Kirk had followed Gordie McMaster classing the Lockerbie flock and it was time to test if what he produces (free-growing wool sheep) were what he's talking about.

"So we bought same rams to find out," Mr Neal said.

IN OTHER NEWS: Wool demand needs kick from the retail trade

Chris and Greg Burke, The Kars, Trundle, also long-time clients of Mr Kirk, returned to purchase five rams and paid up to $2400 and a $1760 average for their 1200-ewe flock of 20 micron classed since Mr Kirk was 18.

Chris Burke said the flock's micron had become finer in the past few years.

The sale was conducted by JN Straney , Condobolin, and Forbes Livestock Agency, Condobolin and Forbes, with Jack Rix the auctioneer supported by "Blue" Reardon.