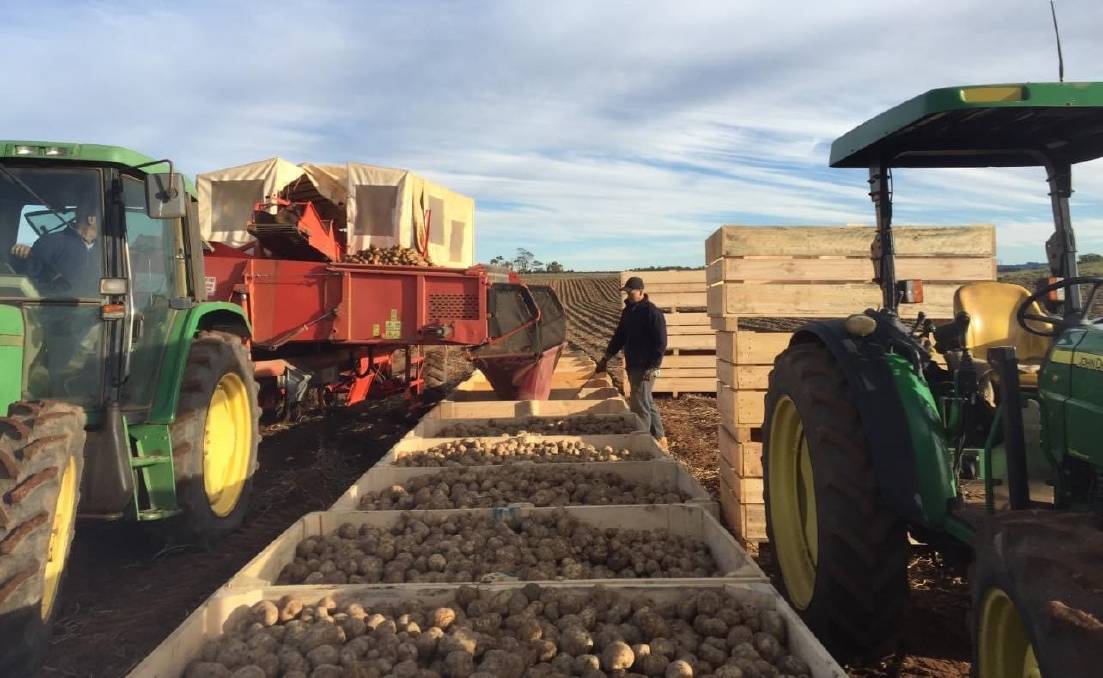 The Crookwell district's Weir family are busy getting ready to plant their next crop of seed potatoes.

Fourth generation seed potato grower James Weir is gearing up for one of the busiest times of the year.

Not only does he have ground to prepare for the next crop of seed potatoes, but the annual ram sale is just over a week away.

James and his parents, Kim and Jenny, farm 400ha near Crookwell, in the gently rolling hills of the Southern Tablelands region of NSW, where they also operate the Poll Dorset and White Suffolk stud, Pinewalla.

They'll offer 135 rams at the November 8 sale on the property and via AuctionsPlus.

The seed potatoes occupy about 40ha each year, and their sensitivity to a wide range of soil borne diseases means they can't be grown continuously in the same ground.

Each potato crop is followed by a summer forage brassica, such as Mainstar or Hunter, and then Manning wheat with Italian ryegrasses and sub-clovers as a permanent perennial pasture for the sheep to graze during the next five years.

Once a paddock has served its time, it is sprayed with Roundup in spring to kill the grasses and conserve soil moisture.

"It's not going to be an issue this year," Mr Weir said.

"But in years gone by it has been an issue, getting enough moisture in our soil to work it." Despite being in a high rainfall area, with an annual average of 868mm, the rain has become less consistent.

Mr Weir said his father was one of the first farmers in the area to adopt irrigation, which he described as a "big turning point" that brought improvements in quality, yields and reliability.

It's also one of the reasons the Weirs have been able to continue growing seed potatoes.

There are now just four producers in the area, compared to about 40 in the 1980s.

The Weirs usually start by deep ripping with a Yeomans three-point linkage plough to loosen up the mostly red basalt soil to a depth of 200-250mm, then use an Amazone KG Super 3000 power harrow to crumble the soil to a fine texture.

Potatoes require large volumes of fertiliser, so it is broadcast before planting, banded below seed at planting, side dressed and applied as foliar sprays during the season.

Guided by soil tests each year, the blends contain nitrogen, phosphorus, potassium and zinc. Trace elements such as magnesium and boron are also important.

"Phosphorus is what we're chasing most," he said.

"Our soil being low in pH, it tends to lock up a lot of phosphorus, so we're also broadcasting a lot of either Pasture King or single super as well to get our phosphorus levels up."

With pH levels of 4.6-5 - compared to the sweet spot of 5.5-6 for spuds - Mr Weir said they had embarked on a solid liming program over the past decade, incorporating up to 5t/ha of lime before sowing back down to the pasture phase.

Certified disease-free mini tubers from AuSPICA in Victoria are bulked up over four or five years to produce stock for sale and planting in the next year.

Planting begins in mid-November, once the soil temperature warms up and the risk of late frost has passed.

A two-row Grimme Gruse planter, soon to be replaced by a four row Grimme GL 430, is equipped with cups that drop the potatoes at the required 150-200mm spacings. Filler boards cover the potatoes and create a small hill along the row.

Two to three weeks after planting, the inter-row is cultivated and the hills enlarged.

This takes out early weeds and eliminates the need to spray herbicide which can damage the young crops.

Depending on summer rainfall, hard hose irrigators supply 1-1.5ML/ha of water from bores and dams.

The crop is carefully monitored during the season for potato moths, which are sprayed when necessary with Coragen to prevent egg laying and larvae burrowing into the soil where they damage the tubers.

Inspectors employed by Crookwell Potato Association, which is also the certification authority, make field visits to check crop health and take leaf samples for virus testing before the crop is desiccated ready for harvest.

After 60-100 days, crops are sprayed with Reglone @ 2L/ha to halt growth, then left in the ground for a month to allow skin set.

A firm skin guards against moisture loss, disease and damage during machine harvesting and grading.

Harvest usually kicks off in late March with the aim of digging as much as possible before the onset of the winter wet season when paddocks often become waterlogged.

"This year we were quite late," Mr Weir said.

"We didn't get finished digging until September just because it got too wet on us too quick."

The Weirs produce about 1500 tonnes each year of a dozen or more different fresh and crisping varieties.

The seed potatoes are certified after a final inspection and trucked to potato growers in Queensland, NSW, Victoria and South Australia.