Farmers are being drawn to the shedding breeds to avoid the management hassle of shearing, crutching and flystrike in longwool sheep. 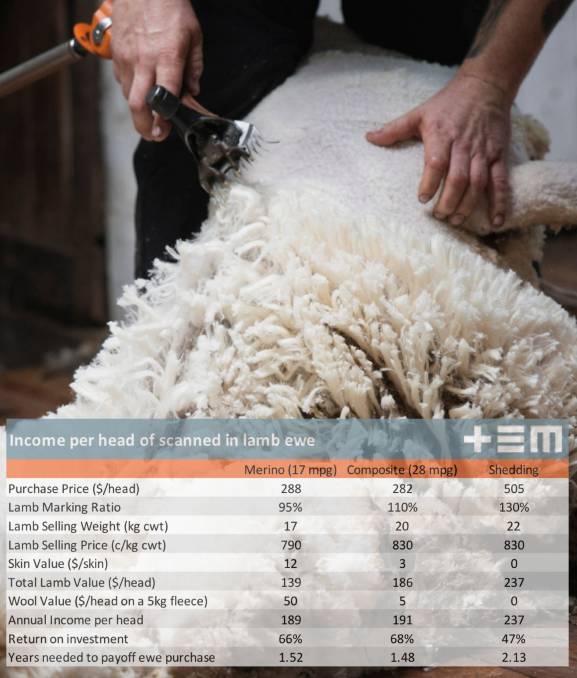 Farmers like Euan and Robert Friday, Barwite, Victoria, made the transition to shedding sheep to be "weekend farmers", in an effort to avoid the management hassle of shearing, crutching and flystrike in longwool sheep.

Over the last six months, scanned in-lamb (SIL) ewes have averaged $505 a head on AuctionsPlus.

"They pretty much look after themselves," Euan Friday said.

The Fridays started with Wiltipolls but felt they were being discounted in the saleyards for the breed's leggy and lighter shape.

In 2014, they turned to Australian Whites before more recently injecting Cashmore Nudies into the flock, which Mr Friday said were more adapted to wet and cold southern conditions.

The 1000-head composite ewe flock is joined for a June/July lambing, with lambs finished on a summer brassica crop and sold between Christmas and the new year, directly to processors, at 18 to 24-kilogram carcase weight.

Maiden ewes are joined in March/April at nine-months-old.

"Your wool clip might pay for the shearers but you don't have the hassle of finding shearers, crutching and they rarely get flystrike.

"The cons would be foot conformation - we have to trim and look after their feet more than other breeds.

"They are great sheep but we need more data, which is a shortcoming of the Aussie White breed."

He said buyers had provided "great feedback the lambs fit well into the grid" with their muscle condition and fat score.

"The pace of growth means they provide flexibility in terms of products you are producing," he said.

This year, Victorian producers purchased 18 per cent of all shedding breed ewes sold on AuctionsPlus.

For the year-to-date, 20,405 shedding breed ewes were bought by the state's producers online, more than triple the volume purchased in 2019 at 6390.

Thomas Elder Markets analyst Matt Dalgleish said the ongoing lack of shearers caused by the pandemic was a driving factor behind the recent interest in shedding sheep.

The spike in demand has resulted in the price of SIL ewes for shedding breeds surging in the past six months, with prices more than $1300 for particular types of Australian White SIL sold on AuctionsPlus during September.

Questioned whether these prices were uneconomical for a producer, Mr Dalgleish said prices for shedding breeds exceeded $700 in September for SIL ewes, while prices plateaued to average $380 during the month of October.

"Indeed average pricing for SIL shedding ewes had been climbing steadily since the start of 2021," he said.

"Over the last six months, SIL shedding ewes have averaged a price of $505 on AuctionsPlus.

Whereas Mr Dalgleish estimates it would take 2.13 years to cover the cost of a shedding ewe investment.

"The return on investment for the Merino and composite SIL ewes were fairly similar at 66pc and 68pc, respectively," he said.

"This demonstrates that it would take about one and a half years to pay off the value of the SIL ewe purchase price of around $280-$290."

He said purchasing a shedding variety at about $500 was "less economic".

"It shows a return on investment of 47pc, or a pay-off timeframe of more than two years," he said.

"Increasing to a $700 purchase price for SIL shedding ewes pushes the pay off to nearly three years, meanwhile $1300 extends it to about 5.5 years."

"Based on these current SIL ewe prices, all three enterprises are pretty similar with returns nearer to 60pc and a pay-off timeframe of around 1.6 to 1.7 years," he said.