Nic Morona has always been an optimist, but there's an extra spring in his step this year thanks to a wetter winter and healthy irrigation allocations. 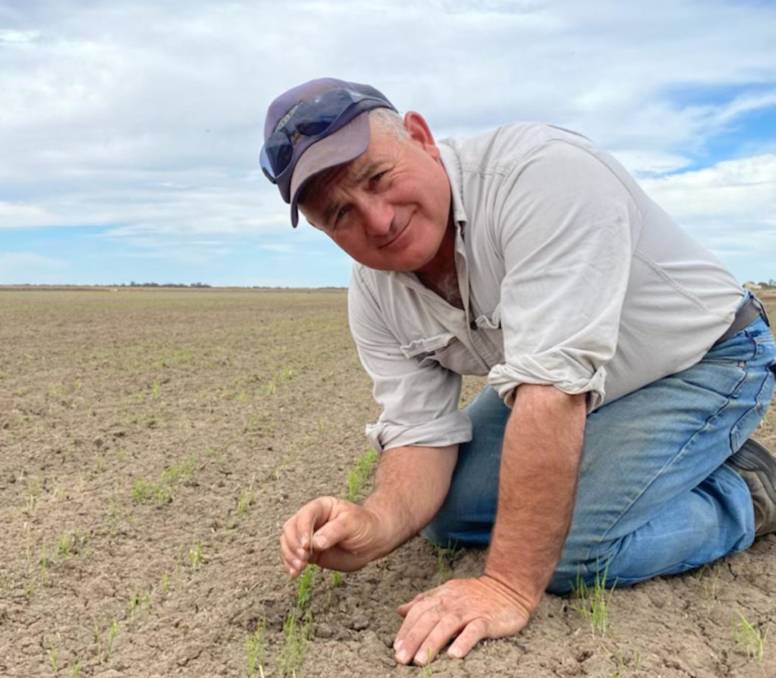 Nic Morona said the likelihood of increased tonnages of rice would have economic benefits that extended well outside the farm gate.

RIVERINA farmer Nic Morona has always been an optimist, but there's an extra spring in his step this year thanks to a wetter winter and healthy irrigation allocations.

"This could be one of the better seasons that we've had in a long time," he said.

Most of the Booroorban country is dedicated to grazing for their flock of 3000 Merino ewes, which produce wool and Wanganella-blood Merino or first-cross lambs.

There is about 3000ha across several properties near Deniliquin under irrigation for both winter and summer crops.

Vetch, clover and ryegrass have just been cut for hay for the sheep.

Crops received the standard spray programs for disease, including rust, and aerial baiting for mice early in the season helped minimise damage.

The canola was windrowed in the last week of October. Harvest will move on to barley in mid-November followed by the wheat in December.

"Hopefully everything's filling well, and there should be good weight in the grains."

Mr Morona said the higher rainfall reduced the need to irrigate winter crops, leaving more water for about 500ha of rice, which was sown in the third and fourth week of October.

After four years of zero to 50 per cent irrigation allocations, general security water has reached 63pc in the Murrumbidgee Irrigation Area and 100pc in the Murray system.

"The previous two summers we only had about 50-60ha of rice. We went to 400ha last year; took the gamble and capitalised on the water market coming down but went a bit early. This year what's so exciting is the water price is under $100/ML and water is quite accessible."

Impressed by the performance of a 20ha trial of the new rice variety, VO71, Mr Morona said they planned to grow more of it this summer, along with Opus, Koshi and Sherpa.

A semi-dwarf medium grain variety, VO71 is reputed to have superior grain yield and cold tolerance to Reiziq, as well as reduced shattering.

"It relies on sunlight hours rather than temperature to promote growth, whereas some other varieties require mainly temperature to grow. So, it matured three to four weeks earlier than the Reiziq, and we were able to get 12t/ha-plus out of the 20ha we trialled."

Another advantage of the quicker maturing VO71 was it needed less water to grow, leading to water savings of up to 2ML/ha.

Mr Morona also has found growing a winter crop of vetch, which they cut for silage, followed by rice helps reduce fertiliser demand in the summer crop.

"In the winter we grew vetch in the fields where the VO71 and Reiziq crops were to be planted," he said.

"These two rice crops stood out all year as they grew green and lush.

"The V071 was definitely the best crop we have grown, but the Reiziq was cold affected.

"Out of the 400ha that we grew, the V071 stood out the best for the entire growing season. It's encouraging us to grow a lot more vetch before the rice.

"As well as fixing nitrogen, it's leaving the soil beautiful and soft, ready to direct drill the rice into."

Because the rotation allows them to grow four crops in two years, Mr Morona said they preferred not to calculate gross margins for a single year or a single crop, even though last year's canola yielded 2.5-3.5t/ha which gave some "very good margins".

"When we put the rice in the rotation, the flooded fields of rice drown out all the grass and weed seeds," he said.

"We therefore reduce our reliance on herbicides.

"And then we plant legumes, the vetch and clover, which fix nitrogen into the soil and there's less requirements for nitrogen fertiliser. We're finding that the whole rotation system works well."

Mr Morona said the likelihood of increased tonnages of rice would have economic benefits that extended well outside the farm gate, providing jobs at the Sunrice mills and grain storage sites where staff were cut during previous dry years that slashed rice production.

"The dams being full will guarantee us a good two years," he said.

"It's putting us in a good place at the moment. We haven't had this kind of certainty for a while."