Farmer groups should set productivity as the industry priority and push to be more involved in Dairy Australia's planning, while also striving for a new level of transparency and integrity in advocacy. 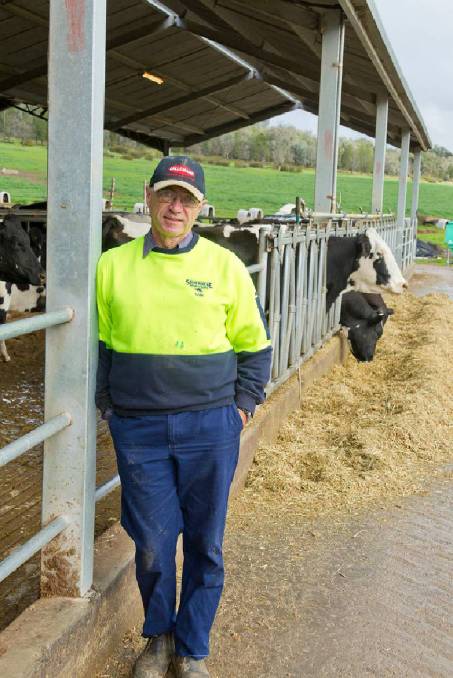 Colin Thompson says farmer bodies should have a much bigger say in Dairy Australia's plans and, if he's elected to the Australian Dairy Farmers board, he'll be pushing for a new level of transparency and integrity in advocacy.

Mr Thompson has filled a casual vacancy on the ADF board for the last year and is now in a six-candidate race for one of two business director positions.

Even though Mr Thompson, who's also chair of the NSW Farmers Dairy Committee, has had six years of experience in dairy advocacy, he said the 12-month stint on the ADF board gave him an appreciation of the role ADF plays for industry.

But, Mr Thompson said, DA had not involved ADF enough during the development of its strategic plan.

"We see it before it's released and we get the opportunity to to review it but it's almost a fait accompli by the time we get to see it," he said.

"I think we need to become more involved in this strategic plan and operating plan as it's being developed, not just once it's complete to basically tick and flick it.

"I don't think, to be honest, National Council did enough due diligence on some of the plans that Dairy Australia brought across for us to check."

"Our RDC, Dairy Australia, needs to review what it's done over that 10 years, or what it hasn't done I suppose, that has led to that flatline in productivity," he said.

Priority should be placed, he said, on new systems for intensive dairies, pasture, and on-farm technology.

Mr Thompson farms a fully-housed 300-cow herd at Cowra in NSW's central west and has hosted events for hundreds of farmers interested in intensification, as well as working with researchers.

"The productivity report found that farmers are good at adopting some of the new technology but they're not very good at turning that new technology into profit," he said.

"So there's a lot of work for research and development in those areas and that's where I would like to see Dairy Australia spend more of their time and effort.

"I'm not trying to be critical of Dairy Australia but I just see opportunities where we could improve things and that's where I'm focused."

In fact, Mr Thompson said, he would like to see a more positive approach across the industry.

"Everyone's done things in the past that could be improved," he said.

"Let's see what we can do to make it better rather than continue with some of the negativity that's prevalent in the industry at the moment by promoting good governance and good culture.

"We must work together and move forward."

An example of that negativity was the response to the levy poll voting options delivered by the Levy Poll Advisory Committee, he said.

"Maybe it's not perfect, and this is probably a great example of something that could and should be reviewed, but there was a process in place and the process was followed," Mr Thompson said.

"We have the results of that process. We need to accept that."

One of the two LPAC members who resigned from the committee in protest, Heath Cook, is also on the NSW Farmers Dairy Committee and competing with Mr Thompson in the ADF election.

Aside from the LPAC decision, there had also been negativity when it came to industry reform, Mr Thompson said.

ADF had been "on the receiving end" of significant criticism that advocacy had not been reformed.

He said every effort had been made to find a way to integrate Dairy Australia and ADF but the prospect of either losing matching taxpayer funding or constraining advocacy meant it had been consigned to the "too hard basket".

"I kind of feel that there was enough money spent on looking at ways of making it happen," Mr Thompson said.

"But that cost would pale into insignificance if there was a complete restructure of both organisations and I'm not convinced it would be any better than what we have.

"ADF is almost an 80-year-old organisation and it's stood the test of time. Sure there's been changes along the way and will continue to be changes but it's pretty stable and well regarded."

As for advocacy, Mr Thompson would like to see ADF address labour shortages, competition reform in the retail sector, and to promote our industry and the benefits of dairy both nationally and internationally.

To do that, and communicate more effectively, he said it was important ADF was better resourced.

"In a couple of years, ADF's gone from seven to six to four to four staff and yet you know, we're responsible for Australia's third biggest rural industry," he said.

The ADF board election will be held on November 25.