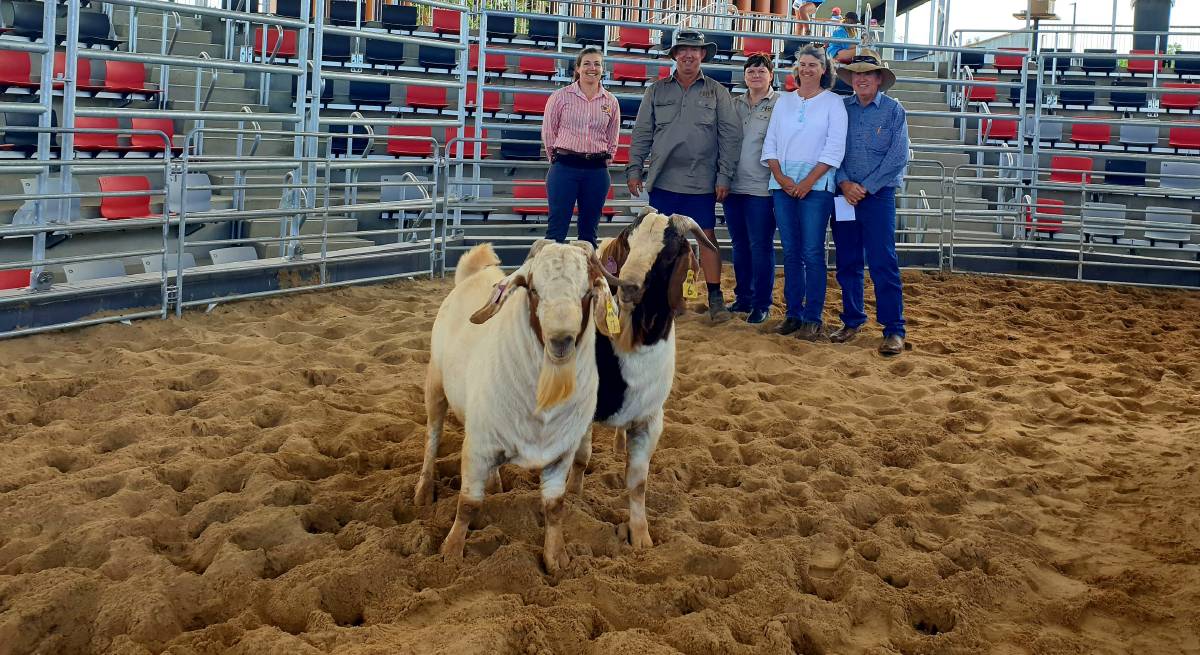 Glenmorgan graziers who have been in goat production for two weeks were the equal top price purchasers at the inaugural Hendon Park Boer goat sale in Roma on Friday.

Glenmorgan graziers who have been in goat production for two weeks were the equal top price purchasers at the inaugural Hendon Park Boer goat sale in Roma on Friday.

They were all part of a history-making day, being the first time the stud stock arena at Roma has hosted a goat sale. 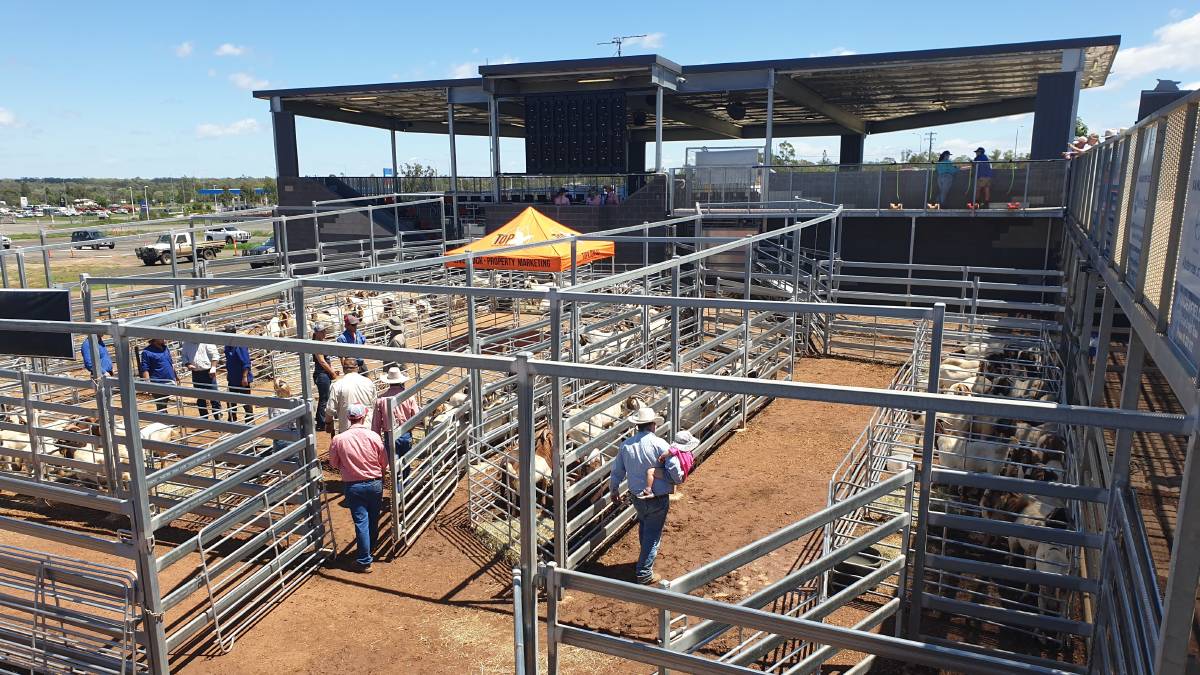 The goats were specially penned at the rear of the bull sale arena.

"Relief is what I'm feeling," Bymount vendor Mike Stanford said after the sale.

As well as not knowing how the bucks would react to a large sale arena, the Stanfords had to contend with a weather front that dumped nearly 150mm of rain in the area in the days before the sale.

The decision was made on Wednesday morning to ferry the goats to a waiting truck by the uteload, and house them in a shed in Roma, and the challenges continued when the yard set-up was undertaken in conditions of extreme humidity.

It resulted an average price of $978, above the reserve price of $800 for the registered bucks, and a 65 per cent clearance rate.

Some 66 of the 101 bucks offered were sold and Mr Stanford said they may have sold a few more under the hammer if more buyers had been able to be there in person, but they were happy there had been rain. 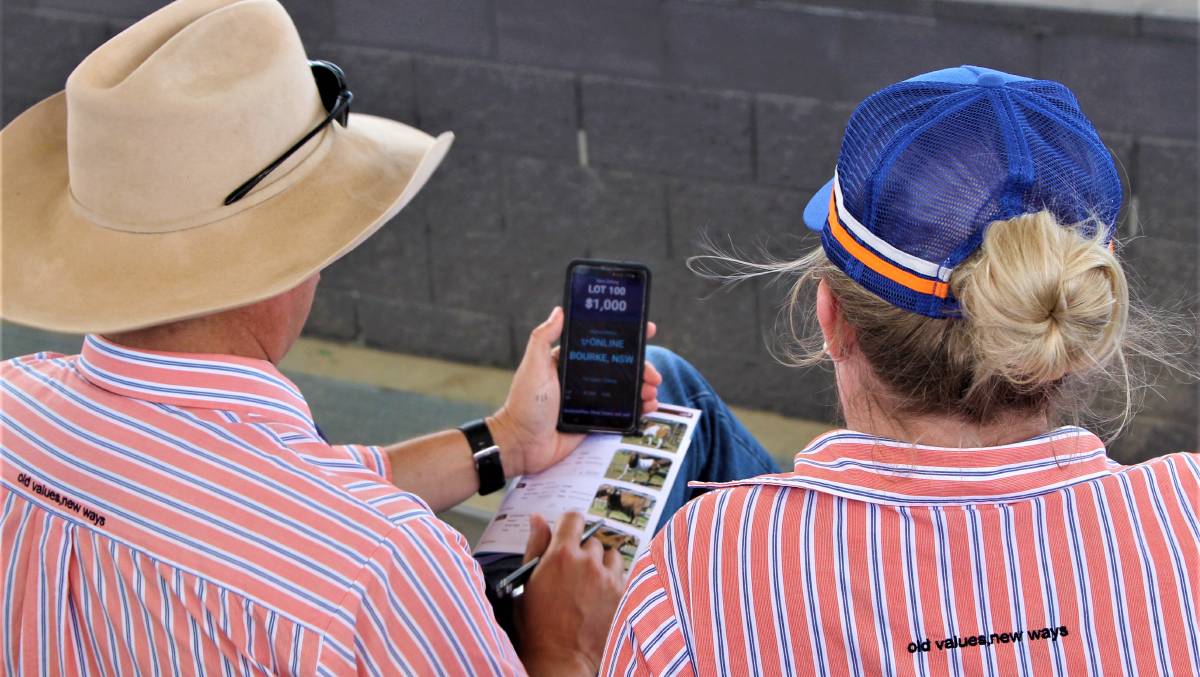 TopX agents managing the AuctionsPlus bids at the sale.

The majority of the goats were sold to existing Hendon Park clients, who had purchased before privately, but it was the McNamara's first foray into the stud Boer goat market.

They have just finished exclusion fencing their country and bought a small mob of goats, and wanted to start with quality sires.

"Movvie's got a name for having handy goats," he said, explaining why he was in the market at the sale.

They are aiming for the skin-on market at Charleville and expect goats to pay for the property's fixed costs, running them on their rougher country on the northern end of the Tomby Range.

They finished the sale with 10 goats for an average price of $1230.

The Dentons declined to comment on their purchase. As well as the top priced sire prospect, they bought two other bucks for a total of $2000.

TopX's Sarah Packer said the purchases would be the first Boer influence for the Dentons, adding that the two top bucks had been hardy and well-muscled as well as having great weight-for-age figures.

"I'm happy that the top bucks are going back into commercial herds," she said.

History in the making - the first Hendon Park Boer goat sale, the first goats ever to be sold in the bull selling ring at Roma #boergoat@qclnewspic.twitter.com/k9BUe6LuGk

V and G Packer and Sons P/L at Kurrajong, Roma were the sale's volume buyer, selecting 18 head for an average of $855.

Bidding on AuctionsPlus, Jonathan Mort at Bourke ended up with six new bucks for an average of $816.

Other goats went to buyers at Roma, Yuleba and Theodore.

The offering included 13 commercial bucks, resulting in 10 sold for an average of $790.

Janelle Stanford thanked everyone who had made their inaugural sale happen and said they hoped it was the first of many.