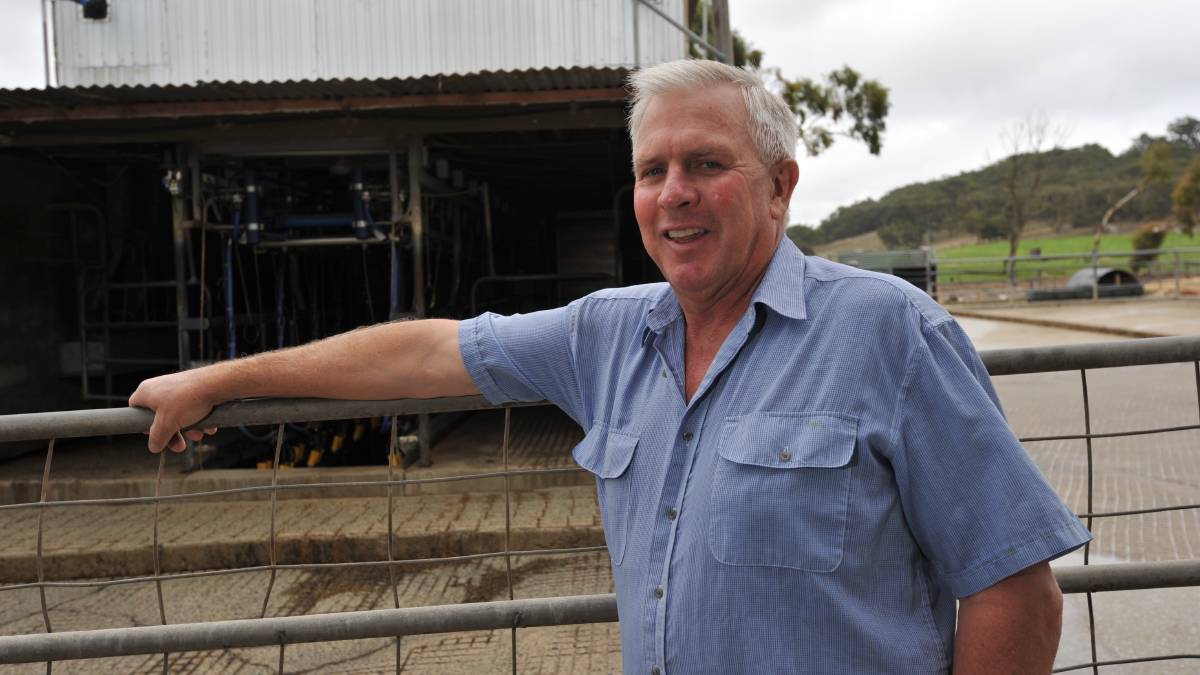 CANDIDATE: Former politician and SA dairy farmer Robert Brokenshire is running for the ADF board and says dairy needs to work differently to influence policymakers.

Former politician Robert Brokenshire says the dairy industry needs to be "stronger" in its negotiations with politicians and not be intimidated by government.

When it comes to wrangling wily politicians, Robert Brokenshire gives Australia's dairy industry a score of about seven out of 10.

He's in a position to judge. After all, he's been the target of countless advocacy campaigns from many groups during a 22-year career in South Australian politics that included a term as a government minister.

Now, as a candidate for the Australian Dairy Farmers board, he wants to turn that experience to the industry's advantage.

He said the dairy industry's advocates needed to "be stronger" when it put concerns and opportunities to government.

"One of the dangers for any board or executive is that they feel intimidated by a government or they feel they've got to have best-friend relationships with government. That's not the case," Mr Brokenshire said.

It meant building a strong plan and strong relationships across the political spectrum.

"It also means that you help to educate the politicians on just what the dairy industry does for Australia and what it could do in the future if it gets the right support and green lights from government," Mr Brokenshire said.

The industry, he said, had suffered in the past when it failed to present that planning and vision to policymakers. The response to dollar-a-litre milk was an example.

"As a dairy farmer in Parliament at the time, I made calls quite urgently to say, 'What is your plan regarding this dollar-a-litre milk? It's going to hurt the industry. If you can tell me what your plan is, I will start to work as a member of parliament to support the industry'," Mr Brokenshire said.

"The fact was that they didn't have a plan and they floundered at the time. That hurt us."

The industry needed to identify the risks it faced and develop plans in advance so that it could respond quickly and advocate for support for its members in a crisis.

Still, he said, politicians recognised that the ADF did understand its members.

"Most politicians respect the dairy industry and what it does, but we're probably not really rated as high as we should be for a $12 billion industry with the opportunity to grow, not only grow at the farmgate but also in value-added jobs," Mr Brokenshire said.

"Where would I rate us? I don't really know but probably seven out of 10 would be fair and we need to go higher than that."

With a federal election likely in the first half of 2022, Mr Brokenshire said it was important for the industry to clarify what it would lobby for as soon as possible.

"We have to make sure that we get our election bid to the mainstream parties and the minor parties as a priority and really reinforce just what we need, and what we're requesting and what we're offering," he said.

The ADF had already done a lot of good work identifying the important issues as a partner in the Australian Dairy Plan but there was still plenty more to be done on topics like truth in labelling, traceability, climate change and water policy, Mr Brokenshire said.

He hadn't been surprised that the Dairy Plan's objective of creating a new body combining research and development with advocacy had met with difficulty.

"There are lots of general opportunities outside of advocacy, where ADF, ADIC, Dairy Australia can all grow their relationships for the betterment of a sustainable dairy industry but advocacy must be autonomous and independent from that," he said.

"You have to be able to have total autonomy when you're an advocacy organisation."

Even so, Mr Brokenshire didn't think levy payer funds spent on the proposal had been wasted.

"It's a work in progress, and I think out of the five key recommendations, Dairy Australia's working on four at the moment so, no, I wouldn't say that it was wasted," he said.

"It was timely to have a look at that and there'll be benefits to come out of that into the future.

"We've got challenges but we've got significant opportunities and, if we get it right, we'll see a very good future for dairy in Australia."

He said nobody needed look further than his own farm for proof. The Brokenshire family was investing in a high-tech 70-stand rotary.

"We're putting our money where our mouths are and it'll be a good opportunity for our family," he said.

"I'd be encouraging the positive and confident focus to dairy farmers to see how they can do their business plans to grow their own farms within the growth opportunities of the Australian dairy industry."

It was the promise of the industry that encouraged Mr Brokenshire to run for the ADF board.

"I want to put back into the industry that I love, and that I know can grow substantially into the future for Australian dairy farmers," he said.

"I don't want to go into the ADF board as a stepping stone to some higher office because I've already had that opportunity.

"I want to put back my experiences and knowledge from that higher office into our own industry.

That's my whole goal, and to hopefully strengthen the way we go forward with agripolitics, which is needed in Australia because our voice has not being strong enough to governments compared to many other countries like Europe, America and the UK."