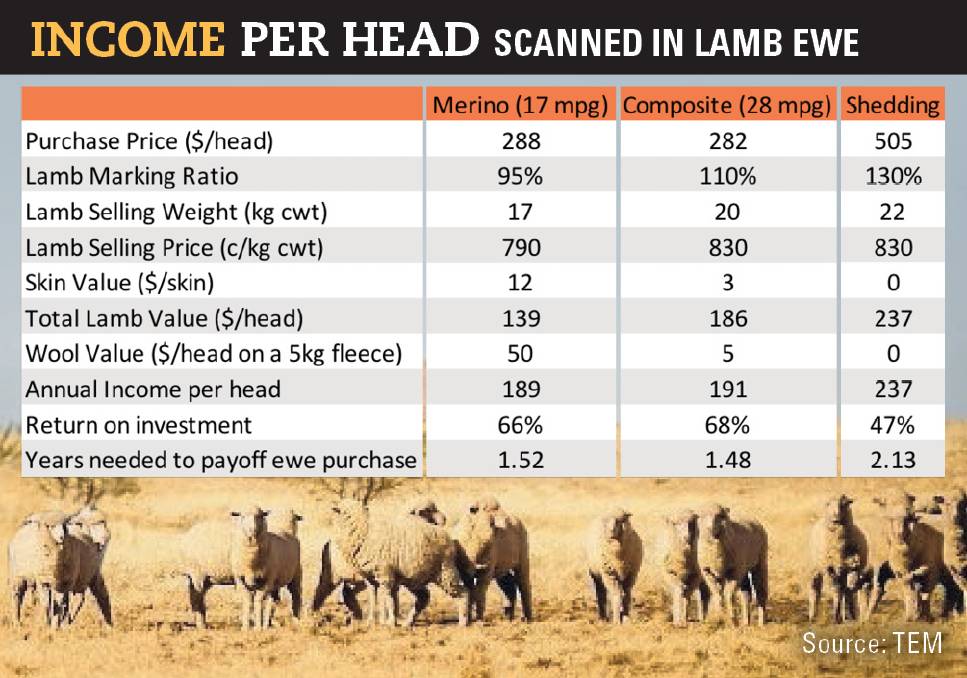 Has the price hike on shedding varieties made them uneconomic compared to Merino and composite breeds?

Since the start of 2021 the average pricing for scanned in lamb (SIL) shedding ewes has been climbing steadily, with a significant surge in recent months.

In September Australian Whites recorded prices over $1300 per head for a handful of particular types of Australian White SIL ewes on the online selling platform Auctions Plus.

Using the average prices for the last six months as a purchase guide for shedding SIL ewes versus composite and Merino ewes, Thomas Elder Markets analyst Matt Dalgleish said one of the three enterprises is less economic than the other two.

"The return on investment for the Merino and composite SIL ewes were fairly similar at 66pc and 68pc, respectively," Mr Dalgleish said.

"This demonstrates that it would take about one and a half years to pay off the value of the SIL ewe purchase price of around $280-$290 per head."

"However the analysis showed purchasing a shedding variety at approximately $500 per head, which was the average price achieved for these types over the last six months, is starting to become a little less economic."

He said the data showed a return on investment of 47pc, or a payoff time frame of just over two years.

And increasing to a $700 per head purchase price for SIL shedding ewes pushes the payoff to nearly three years, while $1300 extends it to about 5.5 years.

Mr Dalgleish said the numbers used in the calculation were an estimate of what they believe to be the average outcome across the nation.

"We were aware of producers that achieve a much higher lamb marking ratio for their shedding sheep," he said.

"But we took the middle ground rather than focusing on what the top 20pc of producers are achieving in their enterprise."

The net value of wool produced was based off an average 5kg fleece per animal and took into account costs associated such as shearing and broker fees.

"We know some producers may be cutting more and earning more, but again we focused on the average outcome," Mr Dalgleish said.

But with October prices for shedding varieties of SIL ewes declining to $380 per head and Merino/composite prices increasing toward $325-330 per head, Mr Dalgleish said a re-run of the analysis based on the current SIL ewe prices showed all three enterprises return of investment was relatively similar.

"All three returns nearer to 60pc and a payoff time frame of around 1.6 to 1.7 years," Mr Dalgleish said.