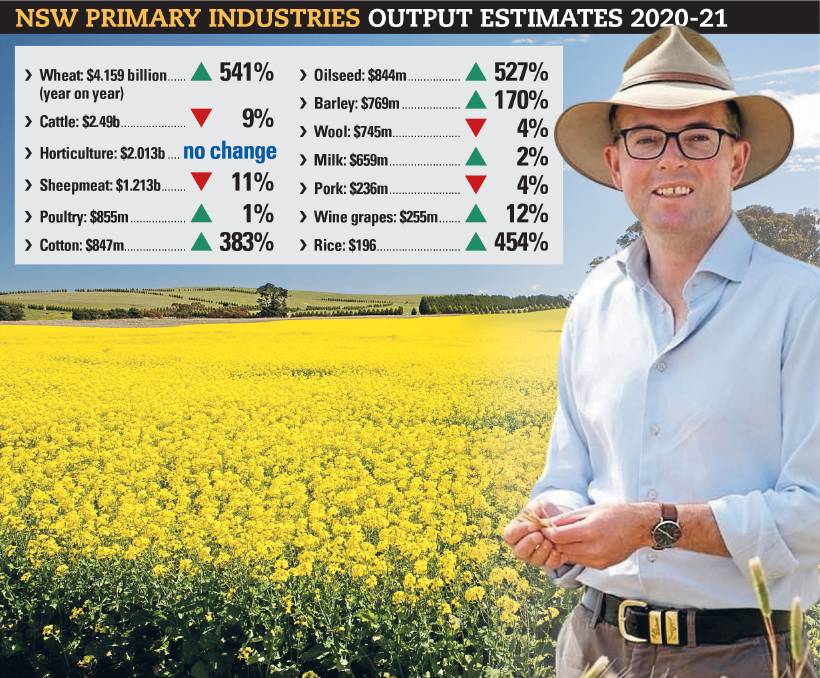 Agriculture Minister Adam Marshall says the sector is well on its way to being a $30 billion industry by 2030.

On the eve of National Ag Day, new figures released by the NSW Department of Primary Industries Performance Data and Insights report today, shows the sector increased its Gross Value of Production from $15.7b to $20.9b in just 12 months.

Cropping industries were the standout as wheat led the charge with a value that has risen 541 per cent from the previous year to $4b (flood damage pending).

Winter plantings were above average, and timely rainfall provided an additional boost with most crop yields into record territory.

"We're well on our way to being a $30 billion industry by 2030," Agriculture Minister Adam Marshall said.

Despite the record result, the year hasn't been without its fair share of challenges including the pandemic, which saw supply chain constraints and a labour shortage.

There continues to be extreme flooding events across the NSW after March's disastrous event and a mouse plague that impacted grain production and fodder stocks.

"Our farmers overcame every challenge thrown their way to smash the record books...this is an outstanding recognition of the capabilities our industry can achieve," Mr Marshall said.

Although he said primary producers were still recovering from drought by rebuilding herds and flocks from historic lows, international demand remained high in the last year.

He said while the NSW government chipped in financial support including $4b in drought aid, $150 million to tackle mice, and $3m in hotel quarantine subsidies for foreign workers, the real hard work was done by farmers.

"While this has been a year to remember for agriculture, it's been a devastating week for our Central West farmers. It's still too early to see the full extent of flood damage, but we'll be with them through the aftermath," he said.

NSW Farmers president James Jackson echoed Mr Marshall's sentiments saying agriculture was on the road to $30b by 2030.

"If we can do $20b with all the things that have been thrown at us imagine what we can do when all the stars align," Mr Jackson said.

"If we get the workforce right, planning right and land conflict right, we can reach that $30b, which will be a huge boost to regional NSW."