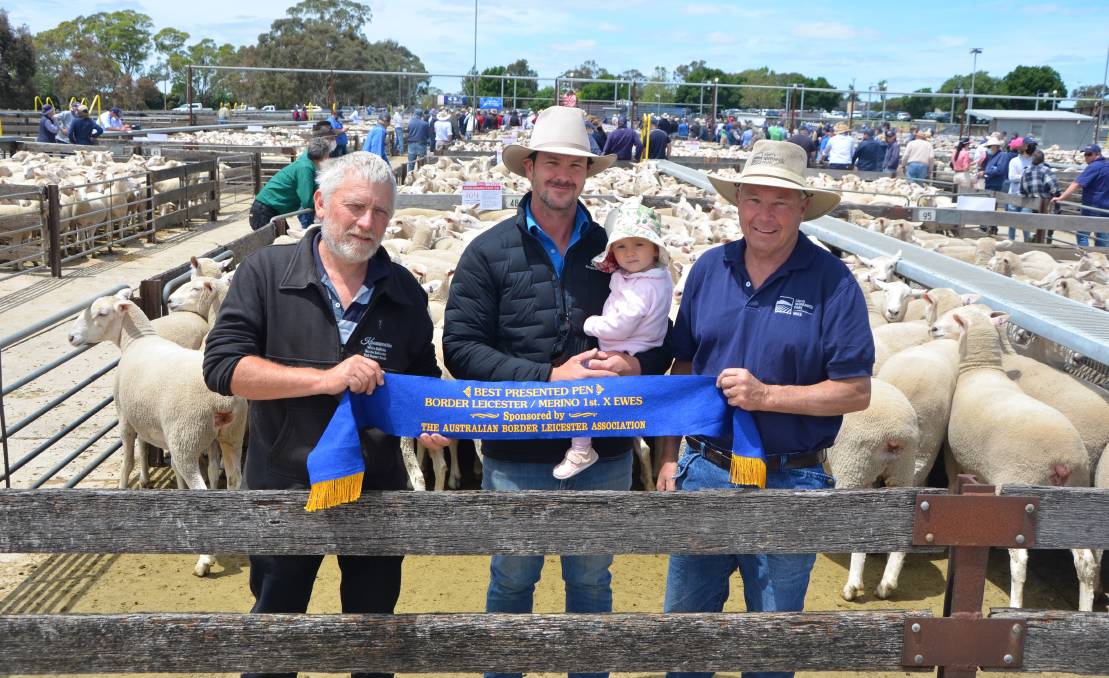 The pen was also awarded the sale's blue ribbon for Best Presented Pen from the Australian Border Leicester Association, an award that was reinstated after a one-year hiatus.

It was another successful day for vendors and agents at the showpiece sale, with close to 20,000 sheep yarded and a sale gross of more than $7 million.

Despite the dizzying heights reached on top-end ewes, prices softened on the middle and lower end run of sheep as the sale went on. The sale's average for 1.5yo ewes finished at $379, less than 2020, but top end rates were generally $20 dearer.

Agents also said the premium for vendor-bred ewes was more noticeable than in previous years.

The sale kicked off with vendors through Thomas DeGaris & Clarkson. The first pen of the sale from Bimbimie Props, Wattle Range, trumped last year's high by reaching $474.

The 129 ewes out of Ridgway Advance and Lines Gum Hill ewes and sired by Morton rams, averaging 66 kilograms, were sold to a buyer through the TDC network.

There was a sense of anticipation when the sale reached the Elders run as onlookers gathered to see whether the national record would fall.

It was toppled on the first bid at $520 and repeat buyers jostled until Elders Naracoorte's Alan Thomson won the battle at $538 on behalf of Guthrie Farms, Dean, Vic.

Mr Thomson said the Guthrie family had bought Coolawang ewes twice previously and were keen to secure the tops this year.

The Guthries run about 800 ewes and also trade 5000 lambs a year. The Coolawang ewes, av 84.4kg, will be mated to Suffolks and Poll Dorsets, with the resulting crossbred lambs sold at Ballarat, Vic.

"The consistent quality you get is what makes these ewes sought after," Mr Thomson said.

"They're large, they're long, they're structurally correct and their wools are good to. The James' have attention to detail and the ewes are always drafted well and presented well.

"They're intentionally bred to do this job."

The Mundulla West operation rounded out the sale podium with their 130 thirds making $496. Their 137 fourths also made $450 and Coolawang's Lachie James said it was satisfying to see all of their ewes go to repeat buyers.

"I thought we'd get close to the record ($516 made at Bendigo), but maybe not quite get there. It was just great to see repeat buyers bidding on them."

Also getting close to the $500 mark were 220 ewes, with Coolawang sires and Moorundie dams av 75.3kg, from Fisher Clover Ridge Pastoral, Marcollat, which made $490.

Topping the PPHS run were 400 1.5yo ewes, av 65.9kg, out of Gum Hill ewes and sired by Coolawang and Paxton rams, from Deepwater Trust, Lochaber, which reached $482.

It was their seconds which made the top price, with their top pen of ewes split into mobs of 110 to Merrett Livestock, Millicent, at $476, and Engler Enterprises, Maaoupe, at $438.

He was ecstatic with his results, receiving $480 for the top run of 109 ewes, av 81.9kg, out of SA Mallee ewes and sired by Coolawang and Inverbrackie rams, and averaging $456 across his total offering of 440.

Leading the way on the Southern Australian Livestock offering was 119 1.5yo ewes, av 73.7kg, out of Sherlock and Ashrose ewes and sired by Netley Park rams, from Lockhaven, Mundulla, which sold for $458 to Creek Livestock.

Nutrien's top pen came from Rushmore Run, Strathalbyn, selling 140 ewes, av 64.7kg, sired by Inverbrackie rams and out of Lines Gumhill ewes, for $456 and a further 140 of the same description for $454 all to Nutrien Naracoorte.

Limestone Ridge Estate, Coonawarra, made $446 for 113 ewes out of Karawatha Park dams and sired by Coolawang rams, while a large run of 583 ewes - from Mallee ewes and Coolawang sires - from Nampara Pastoral Co, Lucindale, reached $442.

Both making $440 were GN&DL Jarrett Family Trust for 92 head sired by Johno's Super Borders and out of Audoma ewes, and Pembroke Pastoral, Penola, for 166 vendor-bred ewes.

PPHS penned more than 11,000 of the Naracoorte yarding and director Richard Harvie described the buying on their offering as erratic.

He said the premium on vendor-bred ewes was more noticeable than in previous years, with those running ewes for 18 months getting reward for effort.

He expected that end of the market to hold firm into the future.

"Our top-end breeder ewes sold exceptionally well and realised rates that were right up there, but it was a bit erratic on the middle run," Mr Harvie said.

"We had some very good ewes in that $320 to $380 bracket that represented good buying - after selling old ewes and your lambs, that's not a bad changeover."

Mr Harvie said the tougher going on the middle run may have been due to the tough start to Autumn and, potentially, some operators moving to composite sheep and consequently not in the buying market.

He said next week's first-cross ewe lamb sale, where up to 35,000 are expected, may see the effects of the tougher middle run and non-vendor bred discount.

"Those that put out a lot of ewes, to come back in next year, may not go as strong on buying lambs because they don't have that margin to work with," he said.

"That could have a roll-on effect meaning secondary and lighter lambs could also be a bit tougher."

"What the sale reflected is there's a price that graziers in the first-cross system are willing to pay and overall averages were very similar to last year," he said.

"The annual presenters of vendor-bred 1.5yo had solid results, but it wasn't extreme across the board. It feels like we're at the ceiling in terms of buyer price."

There was little activity on AuctionsPlus yesterday, but Mr Dennis has an inkling it may play a bigger role in the ewe lamb sale next week.

"The big x-factor in the ewe lamb sale is that if there's value for money there, NSW buyers may play a bigger role in that sale than what they did yesterday, bearing in mind they can fit 700 in a B-double," he said.

GrainCorp back in profit