A group of milk producers in the state's north are fuming that they will not be allowed to vote in Thursday's Australian Dairy Farmers' annual general meeting because of a constitutional requirement that voting members also be signed up to their state dairy farmers' organisation.

A proposal will be put to the AGM that the constitutional wording be "tightened up" to make clear those requirements but even if approved, the structure will not likely alter.

"ADF is 80 years old and is the respected peak body. We have a good connection with the agriculture minister. We are the recognised organisation for dairy on a national level and sitting alongside us is the body representing dairy processors."

Federal minister for agriculture David Littleproud would not be drawn in to the debate, saying only that: "It is not the role of Government to decide what's best for the dairy industry, and nor should it be. Ultimately it must be up to industry to decide who leads it. I strongly encourage farmers to register to vote and have their say."

Disgruntled dairy farmer Peter Graham, Codrington via Lismore, refuses to join his state body, NSW Farmers, citing a lack of support for his fellow border producers who sell bulk milk to Queensland. He has instead joined Queensland Dairyfarmers Organisation, which will be united with break-away representative body Dairy Connect under the banner eastAUSmilk from December 1. It is meant to represent dairy regions in NSW and Queensland, however there is no restriction on farmers from other states joining if they choose.

However, the new entity is not recognised in the ADF constitution and as Mr Graham is not a member of NSW Farmers, he cannot be involved in the national peak body. 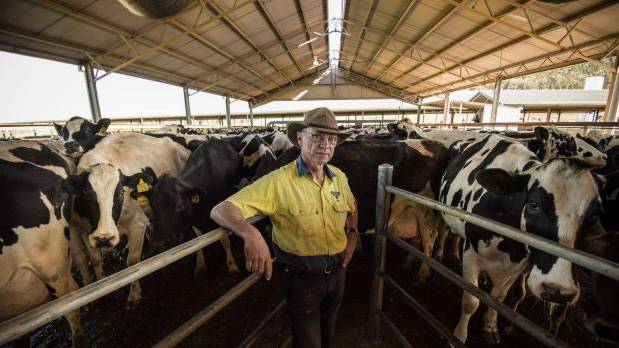 ADF chair Colin Thompson, Cowra, believes in the efficacy of the organisation. "ADF is 80 years old and is the respected peak body. We have a good connection with the agriculture minister. We are the recognised organisation for dairy on a national level," he says.

"Every dairy farmer should automatically be a member of the ADF without the need to be members of a state-based body. That would give ADF more support, more recognition, more worth," said Mr Graham.

In fact, ADF only has 10 per cent of the nation's dairy farmers as voting members and Mr Thompson admits that the fault lies with the NSW state farmers' organisation and that more need to be done to encourage farmers to participate.

"Any farmer who is a member of their state organisation can vote, they only need to register," the ADF director said.

Mr Graham said the impending merger between DC and QDO was a first step towards a united voice and there was the belief that NSW Farmers Dairy Committee would join with the new union to help form eastAUSmilk.

"There was an assumption that the merger would go ahead," he said. "Then NSW Farmers pulled out. That was a disgrace. Now members of QDO potentially have no voice in ADF voting."

This applies to NSW based members of QDO.

"I joined QDO hopeful that dairy farmers would unite under one voice.

Dairy Connect board member Terry Toohey voted to unite DC with QDO into the new entity because he believed the outcome would benefit dairy producers more effectively.

"I can be a beef producer and pay my $100 to become a member of the Cattle Council yet ADF won't allow a farmer to join unless they join through a state organisation, like NSW Farmers. Casino dairy farmer and Dairy Connect board member, Terry Toohey, says amalgamation of all parties into one voice is paramount if producers want to talk to government.

"State borders are meaningless," Mr Toohey said. "Milk produced in Victoria is sold in Queensland. Northern NSW farmers sell bulk milk into Queensland. This is why we've formed eastAUSmilk, so that any producer working in that supply chain can come together as one voice. That was the model of Dairy Connect, representing farmers, processors and retailers - all coming to the one table. Now we are amalgamating to make things happen because 92pc of Queensland dairy farmers support amalgamation

"It is disgraceful," he said. "Recommendations in the Dairy Plan said to get rid of state entities and have one farmer representative body."

Dairy Connect chair George Davey, the former head of the NSW Food Authority, and deputy director general of DPI, described ADF as an organisation that has failed to move with the times and that no longer holds relevance in the free market system.

"ADF talks about inclusion but they are excluding potential members. That is unacceptable," he said. "They talk the talk but don't walk the talk." Dorrigo dairy farmer Heath Cook is running for one of two seats on the ADF board and says grass roots engagement is paramount to the future success of the peak body.

Unity between bulk milk producers north of the Riverina is an obvious solution to effective representation, says president of the Queensland Dairyfarmers Organisation, Brian Tessmann.

"We are all in the same market, and we experience similar production challenges," he said.

"We have different issues compared to Victorian and other southern producers."

Mr Tessmann said the absorption of Dairy Connect into the QDO structure to form eastAUSmilk, with the AUS signifying advocacy, unity and service, was the first and so far only such union of producers - a concept endorsed by the new dairy plan as a way to rationalise membership under the chief body Australian Dairy Farmers.

"Ours was originally in three parts but NSW Farmers' dairy committee pulled out," he said.

Of the 50pc of QDO members who voted, 92pc were in favour of the union.

"It is disappointing that only two bodies have taken it through. Victoria and South Australia have similar markets and production systems. They are no different.

"The question is not why but why not?"

Cattle council board positions open to the vote

Postie the last of a dying breed