AFTER four years without it, Narromine farmer Scott Vincent is looking forward to getting back into cotton. "When there's water available, it's my biggest gro... 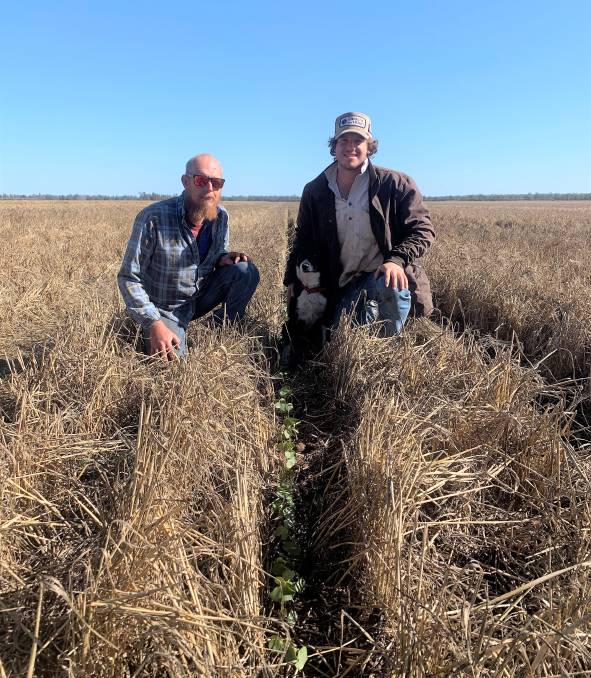 Wirrigai farm manager Ryan Flemming, Narromine, and Harry Vincent who is home for the grain harvest. Sisters Alex and Charlotte also lend a hand during holidays.

AFTER four years without it, Narromine farmer Scott Vincent is looking forward to getting back into cotton.

"When there's water available, it's my biggest gross margin crop," he said.

"This will be my first cotton crop since 2016-17. There hasn't been much grown anywhere in the last few years and prices are looking very, very strong."

Australian cotton production plummeted from 4.65 million bales in 2017-18 to less than 590,000 bales in 2019-20 in response to drought, low water allocations and high temporary water prices.

By the time the next harvest concludes, Cotton Australia forecasts production to be back above 4.3 million bales.

Mr Vincent crops 2000ha at Wirrigai, alongside the Macquarie River north of Narromine, with his wife Cath. They grow dryland and irrigated winter and summer crops and have 400ha under Zimmatic centre pivot and Otech lateral irrigators.

The choice of seeder depends on stubble load and whether the soil would benefit from being broken open.

The grain harvest started with direct heading the canola earlier this month but was interrupted by last week's rain.

"The crops are looking good," he said.

"The canola is yielding well, but it's too early to tell what the average yields will be."

Why choice of winter pasture legume is so vital

Preparation for the cotton crop begins in April with spreading of fertiliser including lime, gypsum and BioAgPhos, a composted rock phosphate, followed by ripping if needed.

A green manure crop such as wheat is sown with monoammonium phosphate in late April.

"During the season we spray for broadleaf weeds," Mr Vincent said.

"We don't worry about grass weeds in the mulch crop. We'll terminate that in October and spray it with 3l/ha of BioAg Soil & Seed ready for the cotton."

It receives BioAg Soil & Seed at 3l/ha, Regent in the slot at 100ml/ha to guard against insect damage, and Metarex slug bait is spread on the surface.

The cotton has been watered and a blend of urea and sulphate of ammonia was spread at 300kg/ha. The first in-crop weed control with Roundup is due in the next week.

Sap testing during the season allows Mr Vincent to make sure the crop is not lacking nutrients. It will get a foliar spray of zinc and doses of BioAg Balance & Grow and BioAg Fruit & Balance as needed.

Depending on the weather, the cotton will be watered as required by the overhead spray units. As a newcomer he found the industry highly professional, welcoming and fellow cotton growers were very helpful. He took to it with gusto, winning the Macquarie Cotton Growers Top Yield competition in 2014, with 14.3 bales of cotton from 7.8 megalitres of water under one of the centre pivots.

Improving soil health has been a priority for Mr Vincent, although it's had some unintended consequences.

"Our soils are so healthy that slugs are a big issue for us now. We look like having to stop growing mulch crops and fallow land for 12 months after growing wheat just to reduce the slug numbers."