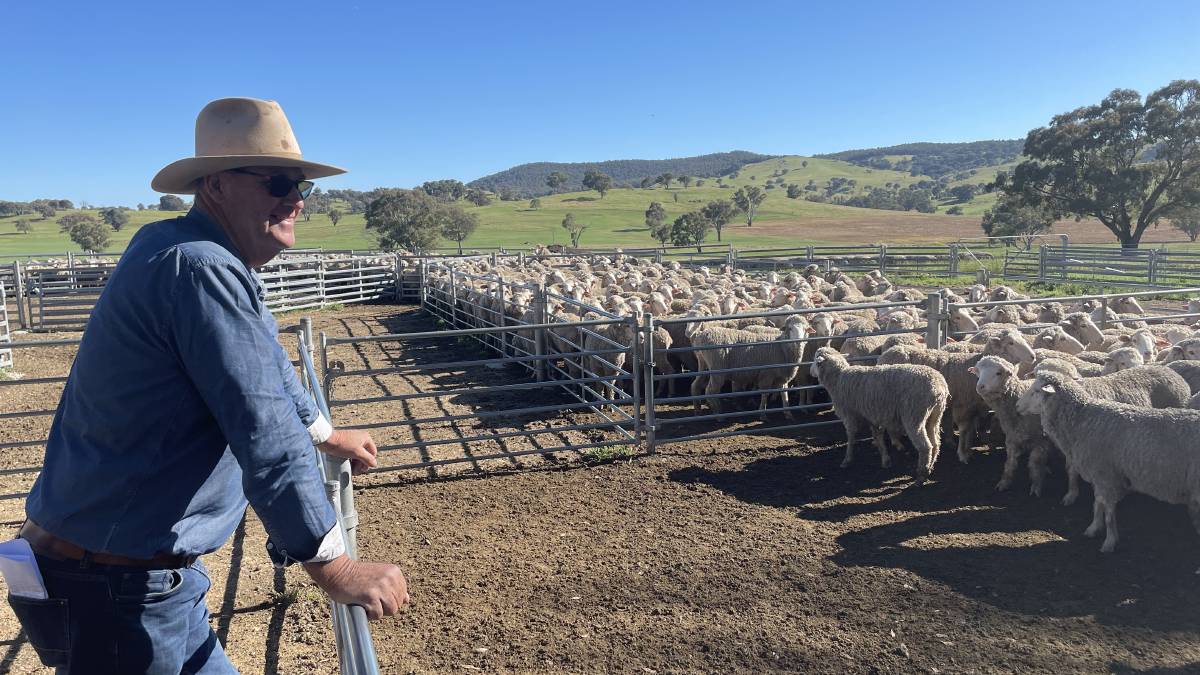 During the recent Bookham ewe competition, judge Nigel Kerin questioned many of the accepted practices carries out on sheep properties.

A wet winter foretelling a wonderful spring is always welcome by livestock producers as it leads to the chance of those animals fulfilling their genetic potential.

Although the damp conditions are welcomed by landholders, for those with sheep it does increase the prevalence of animal health issues such as scald or foot abcess.

The presence of any issues with an animal's feet is obviously going to lead to a deterioration in the productivity due to their inability to move to fresh pasture easily.

Most susceptible are those ewes either in their later stages of pregnancy or rearing lambs, and producers have for a long time regularly walked their flocks through footbaths to alleviate the problem.

Look at any set of sheep yards across the high rainfall areas, and you will see an extended concrete footbath through which the sheep walk through in single file as they leave the yards.

Sometimes, in really wet years such as landholders experienced this past winter, the sheep might be brought through the yards every two weeks or so.

But how successful is that practice?

That was a question posed to wool growers who attended the recent Bookham Merino ewe competition by one of the judges Nigel Kerin.

Mr Kerin is a successful breeder of Merino rams at his stud near Yeoval, and is known for challenging accepted industry practices.

During his travels around clients in Tasmania and Victoria, one thing he has noticed every year is that they all live with scald.

"They just live with it, but the one thing I have learnt from the Tasmanian sheep breeders is if you are going to build a stand-in footbath, make it a big one," Mr Kerin said.

"And that means six metres by nine metres at a minimum so you can run 200 in it at a time and leave them there for at least an hour or even two hours."

By giving the feet a really thorough soaking, Mr Kerin said it was far more effective than letting the sheep walk though a long bath.

"Another thing I have learnt from the Tasmanian's is stop using ten percent Zinc Sulphate and go to 25pc in the solution - that is one bag to each 100 litres of water," he said.

"And they are saying if you footbath for one hour or more with sheep standing in the bath at 25pc, you can literally eliminate your foot bathing by about 80pc in that year, when you might only have to give them two foot baths."

Mr Kerin then described the problem with footbaths is that it is very time consuming and the sheep spend more time actually being mustered to and from the yards.

"In my area it was always a given that everyone had walk through foot baths," he said.

"Now all the farms have big standing foot baths and the first thing it eliminates is wages."

Assessing each flock for their production potential as if he was their manager.

Invited to be one of the judges during the 2021 Bookham Merino ewe competition held on 9 November, Nigel Kerin accepted the responsibility without fear or favour.

Mr Kerin is principal of Kerin Polls, a Merino stud near Yeoval and renowned for the outstanding results from his annual sale.

Speaking at Bogolara, Bookham, where the Boxleigh Park-blood flock bred for owner David Carr by property manager Greg Sheather were displayed, Mr Kerin said it was the first time the flock had been entered so no one was able to draw comparisons on whether they are improving or not.

"But the first thing I notice when I walk into the yards, as a manager I am looking at the ewes and thinking what is their most important next date," he said.

"It is their joining day (1 April) so these ewes have be gaining 100gms from now until the first of April to be able to get to a condition score suitable for joining."

He pointed out the one factor in holding the ewes back from reaching their genetic potential is the prevalence of foot scald throughout the flock.

"However, the first thing we see is that it has been recognised and the owners are building a new big stand-in footbath," he said.

"It will cut your foot bathing time back to about 20pc of what you were used to, because we have found that walk through foot baths are only effective for about two to three weeks."