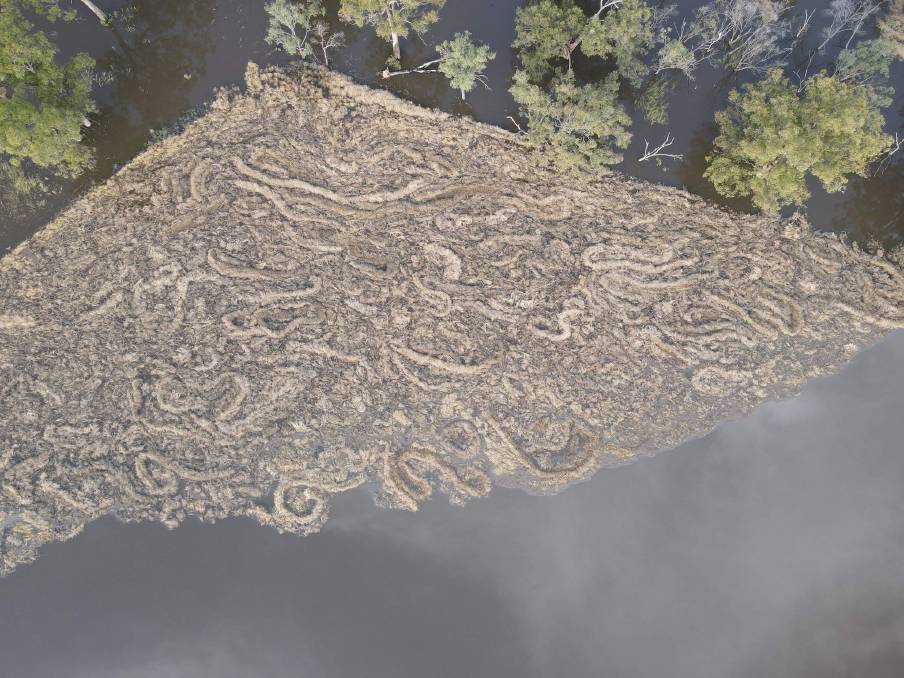 A portion of Luke and Beth Schofields' windrowed canola along the Lachlan Valley Way washed up in the fence. Photo: NSW DPI

The Lachlan River flood might be moving downstream after having peaked at 12.44 metres at Nanami last Monday and then 10.54m at Iron Bridge in Forbes on Thursday, but discussion around the role of Wyangala Dam wall is on the rise.

On Tuesday, when The Land spoke with farmers along the river, besides the immediate issue of crop damage, the divisive topic of the dam wall was front of mind.

Dennis Moxey, Denngal Santa Gertrudis, downstream of Jemalong, asked "would the damage be less if there was a bit more wall on the dam?"

He was harvesting on Tuesday, trying to get off any crop he could before the next rain.

He said the flood had put a "huge amount of crop under water".

"There's thousands and thousands of acres of wheat and canola and barley underwater," he said.

He said throughout September there had been three rises that flooded out of the river, but this time, with the crops more mature and with greater depth, it was rotting the crop and washing it away.

Another issue was the number of closed roads limiting access to silos for what crop he was able to harvest.

Mr Moxey said he had "a couple of hundred hectares under water", but wouldn't lose everything.

Some of his neighbours, however, had much larger areas inundated and stood to lose a lot, including lucerne grown for seed that would likely rot from waterlogging before the flood receded.

Mrs Brown, whose farm has been cut in half by the flood, runs a mixed cropping and sheep operation and her family had just started harvest on their second farm near Gunning Gap this past week.

"I think the hardest part is that it was just so close to harvest," she said.

With a big flood in 2016 and now also in 2021, she said raising the Wyangala Dam wall was "something that needs to be done sooner rather than later - I think it will help with these major events".

Mr Johnston agreed, saying if the wall had been there this would be a more positive event.

While his own farm had escaped relatively unscathed, he said it was also about the huge cost to infrastructure such as roads and the increased reliability that came with more stored water.

The Browns, meanwhile, had their sheep on a higher part of their farm. They left a motorbike across the water and rode a boat from near the house across to the bike, also where they kept their sheep during a flood.

Through all this, Mrs Bower's pride in her community was clear to see.

"Bedgerabong is a fantastic community and we work together to take care of one another," she boasts.

"You can see that by the teachers putting their hand up to be put on a helicopter to get to the school," she said.

Most of the community had also been busily sand-bagging the village all week in preparation for the rising water.

Phil Prior, Ag n Vet, Forbes, said the main impact was perhaps yet to hit, as a lot of the company's clients towards Condobolin awaited the peak.

He said a lot of cut canola had already been hit , but "out there (towards Condobolin and Corinella) it's a lot flatter so the water will hang around for a while".

Luke and Beth Schofield, Forbes, were among those that lost canola to the flood's path, their crop only recently windrowed with piles now washed up along fence lines.

They were also just two weeks from harvesting a bumper wheat crop.

While Forbes itself has so far seen lower than expected flood levels, the Lachlan River peaked above 2016 levels at Nanami and the water was well above the flood level of five years ago when it arrived at the Schofields' properties.

Closer to Forbes, Rick Schofield has had to pour 8500 litres of milk a day down the drain with the roads to the family dairy closed since last Tuesday.

"For some reason we have seen more water on the south side of the river this time," he said.

He's a fifth-generation dairy farmer; his parents have been on their property for 32 years and believe this flood is as high as 1990.

They continue to milk the 300-head herd, which is safe and dry, twice a day, but the milk has to be dumped.

"It's a fresh product, perishable, it can only stay two days on the farm and then it's got to go to the factory for processing, I can't store it," he said.

Upstream of Forbes, the water moved through faster.

Grains and vegetable farmer, Ed Fagan, Cowra, described the flood as the latest event in a difficult year.

He said regular, decent rainfall events had occurred without an opportunity between for the country to dry out.

"We had a few hundred acres go under...luckily we didn't have any high value crops go under," he said.

"We fared ok because we had levies. If we didn't have levies it would have been a lot worse."

Wettest November ever for parts of NSW

In his case, the timing was also lucky, with canola not yet windrowed and cereals not quite ripe.

"We still have soft grain and green wheat, so while it's still a disaster, it's not as big a disaster."

William Bugeja, Lachlan Valley Turf, Cowra, also scraped through reasonably well, having only lost one block of turf which, fortunately, had mostly already been cut.

He still had one low section of his 67 hectare farm to pump out, but was waiting for this week's wet change to pass through.

He's been on his block since 2000 and said while the water moved through reasonably quickly along his section of the river, he felt had he been growing vegetables, he would have suffered much worse damage.