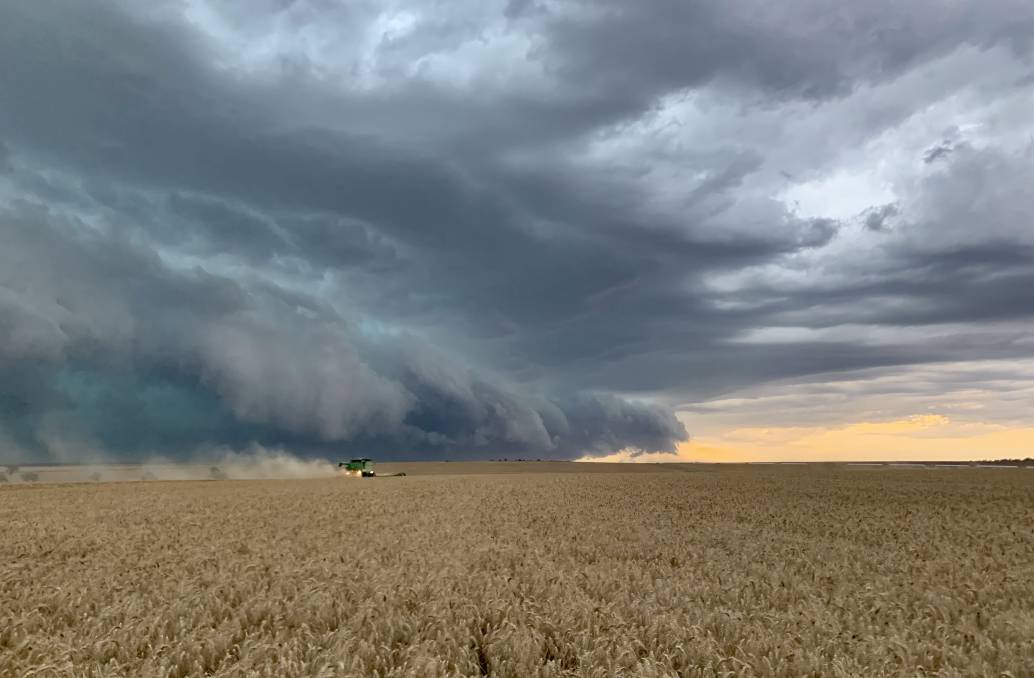 A header driver works frantically to get in as much grain as possible prior to the rain as storm clouds build ominously at 'Avoca', North Star in northern NSW.

HAVING enjoyed near ideal conditions throughout the growing season east coast grain growers are enduring a torrid harvest period, with record-breaking November rain likely to cause significant damage to winter crop yet to be harvested.

The rain has also extended over South Australia, where it had been drier during the growing season, with similar downgrading issues likely, especially in barley crops.

In NSW, parts of the Central West and the north-west have already seen their wettest ever November with further substantial falls forecast for the rest of the week.

The Bureau of Meteorology said Gunnedah, on the Liverpool Plains, had recorded 239mm to November 22, Orange 243mm, Goulburn 154mm, Bathurst 197mm and Manildra 167mm, all surpassing the November record with more than a week to spare.

Records at Bathurst and Manildra both go back over a century.

In South Australia, Michelle Bammann, Ground Up Agronomy, said many of her clients, centred on the Mid North and the SA Mallee, had received between 50 and 160mm for the month, which she said was markedly above the November average.

She also said the rainfall pattern was unusual in that northern areas had received far more than the south.

"In Clare we only had 14mm on Saturday but as you hit Spalding and north there were tallies of over 40mm," Ms Bammann said.

The rain has not been limited to the Mid North.

One advantage in SA compared to NSW, however, is the maturity date of the crop.

"We expect some damage in the barley but hopefully a lot of the wheat is not yet ripe enough to suffer damage from the rain, especially if it dries up and there is no follow up falls," she said.

Victoria and Queensland have also seen heavy rain, with Charleville and Roma in inland Queensland both recording over 160mm for the month so far and Bairnsdale, in Victoria's Gippsland region, receiving over 140mm in the first three weeks of the month.

While there has been harvest rain in WA it has not been of the same volume as further east and the major impact is the delays in harvest rather than downgrading.

The BOM said the heavy November rain had been facilitated by a combination of short-term and long-term weather drivers.

A BOM spokesperson said repeated cold fronts, surface and upper-level troughs, and low pressure systems throughout November contributed to widespread thunderstorms, showers and areas of rain across much of Australia, apart from WA west coast.

On the longer-term front, the spokesperson said several climate drivers had combined to produce the current spring outlook for Australia, including a negative Indian Ocean Dipole (IOD), the newly declared La Nina pattern and a positive Southern Annual Mode.

All of these contribute to the chances of above-average rain in eastern and parts of southern Australia.

Lecturer of climate science at the University of Southern Queensland Christa Pudmensky said the climate drivers had been conducive to tropical moisture being dragged south over much of the continent.

Dr Pudmensky said the November falls may be just the start of a wet summer if the La Nina event met with continued moisture bearing pressure troughs.

She said although the La Nina may not be as strong climatically speaking as the 2020-21 event it may still be wetter.

"The pattern is correlated with above average rainfall but still needs those short term weather events and evaporation off the oceans to create those big rainbands," Dr Pudmensky said.

She said the location of pressure ridges played a key role in the exact location of the rainfall.

"The current location of those ridges has meant the rain has tracked through central SA and NSW, whereas if it had moved south you would have seen more rain through Victoria."

She said the recent rain had also been characterised by large amounts of convective, storm-driven rainfall.