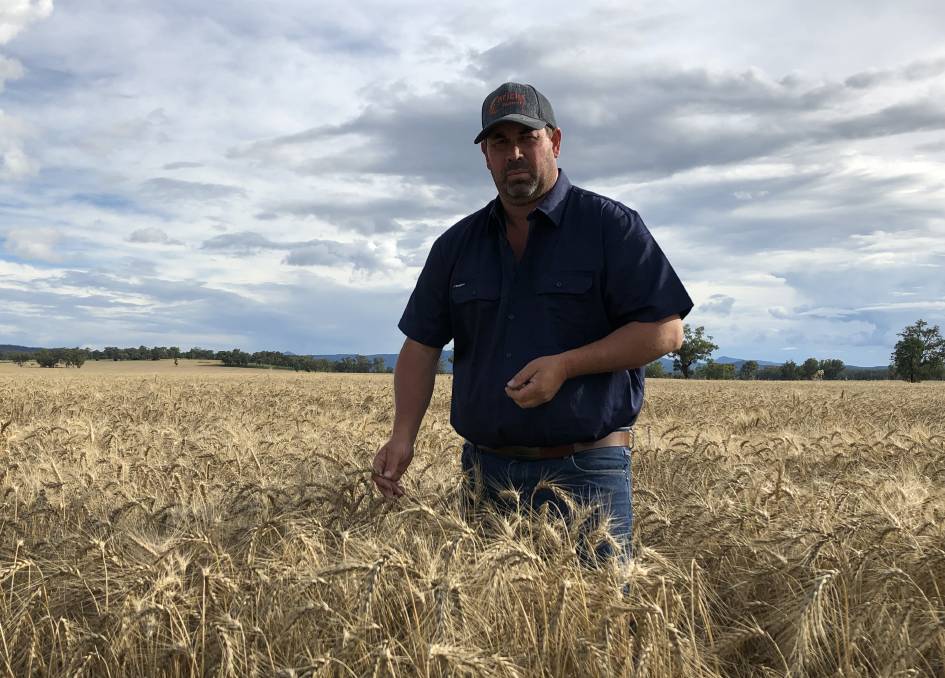 Award-winning graingrower Glenn Fernance in a crop of Hellfire wheat at Bellata that he says will probably be downgraded to stock feed, costing him over $170 per tonne, as rain creates havoc across the grain belt.

Don't give up on grain quality, says Moree agronomist

It's a ripper wheat crop, even better than last year's boomer, that will see some paddocks yield up to 10 tonnes a hectare, but Glenn Fernance just can't get into his Bellata paddocks because of constant rain.

The state award winning graingrower says it's causing a lot of mental stress to see such a great crop sitting there, unable to be harvested and open to the next belt of rain.

He's already bogged a harvester and a chaser bin. He's only harvested 20 per cent of his 1900 hectares at Courallie Park of durum and bread wheat, Lancer and Hellfire varieties.

But one of his crops on the lower ground has not fared well (pictured). He was hoping this Hellfire wheat would go Australian Prime Hard 2, getting about $400/tonne. Now he says it'll probably be feed grade wheat attracting $235/t. It'll go about 6t/ha.

But at least he'll be getting a crop off. Many graingrowers on the flatter land west of the Newell Hwy will probably have to write-off some crops, with reports of up to a foot of water moving through paddocks.

Mr Fernance will need at least 10 days of clear weather after the next rain event to get back into harvesting.

It's a waiting game being played out all over the North-West Slopes and Plains.

Although the last rain event was smaller in the north-west than first feared, another system is set to dump rain right up the middle of NSW again by the weekend of up to 50mm, with more in storms, as tropical mositure feeds down from the north-west into an unsettled air mass.

Hopefully there will be a clearing weather event that follows from the weekend in the north-west.

The harvest has been a painstaking affair for many, while sheep owners have fought off flystrike, and running to get sheep into sheds for shearing to keep them dry.

Some chickpea crops have also started showing signs of mould, a serious blow. 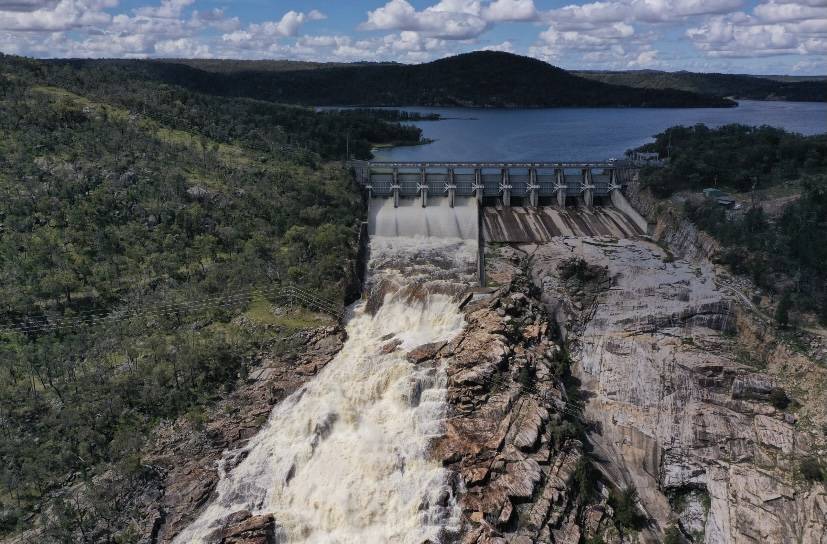 Copeton Dam, on the Gwydir River, spills for the first time in nine years, with 5 gigalitres being released each day. Photo courtesy of WaterNSW.

In the Moree district a flood alert was downplayed on Tuesday - but the area faces a new threat with Copeton Dam that feeds the Gwydir spilling for the first time in nine years.

At the moment it is releasing 5 gigalitres a day, and WaterNSW has warned it will be trying to find airpsace for all full dams with a wet summer predicted and a La Nina event declared.

Helen Carrigan, Welbon, Garah, says her family were glad to get their Dohnes in for shearing after many rain events. There was major flooding nearby at Yarraman on the Gwydir and they feared again they may be cut off.

Mrs Carrigan, who is NSW Farmers Garah branch president, says many farms in the area were still getting back on their feet after widespread floods in March that tore down fences. Getting labour to fix damaged infrastructure had proved difficult, she said.

"Flystrike has been really bad," she said. She and husband Chris run about 3500 breeding Dohne ewes in a self-replacing flock.

If the floods get bad, with Copeton Dam now spilling into the Gwydir, the sheep will have to just find high ground. "It's in the lap of the gods what happens, but at least we have lots of feed."

AMPS Moree agronomist Tony Lockrey says it's a very mixed bag throughout the Moree district. The essential harvesting puzzle plays out as about 50 per cent of the crop harvested north of Moree, and 20-33 per cent harvested stretching down towards Narrabri.

At least most canola and faba bean crops had been harvested.

Mr Lockrey said it was too early to say what the quality of wheat would finally be.

"It's a pretty frustrating condition, a lot of harvesters and trucks are leaving, heading south for canola further down," he said. "Surprisingly some good grades are coming off prior to this rain event. So not downgraded as much as we thought possible, but I'm not talking down anything.

"Our yields are phenomenal and our quality has been good and our summer crops are in really good shape at the moment, the late planted cotton may be a little wet."

Some growers are upset that receival depots have started introducing falling numbers machines to detect shot and sprung grain, they say often gives an inaccurate reading - and costly at up to $80/t if downgraded.

Meantime, there is a big watch on catchments and further flood events.

WaterNSW reported that "inflows continue for WaterNSW dams in the Gwydir and Namoi valleys after weekend regional rainfall, which is also generating large flows in the Peel Valley".

Copeton Dam has filled, and was releasing at 5GL/day, while "Keepit Dam continues to spill, both after receiving large volumes of inflow that peaked at Copeton at a rate in excess of 100 gigalitres per day (GL/day)". "Keepit Dam is currently sitting at 101pc of capacity, with inflows dropping to 25GL/day. Releases have been held at 20 GL/day to limit the impact of large flows from the Peel River entering the Namoi downstream of the dam."

Copeton Dam was receiving inflows of around 30 GL/day on Tuesday. "With adequate storage capacity to capture most of these inflows, there are no immediate plans to increase releases. WaterNSW is continuing to monitor conditions and manage airspace releases in line with weather advice from the Bureau of Meteorology."