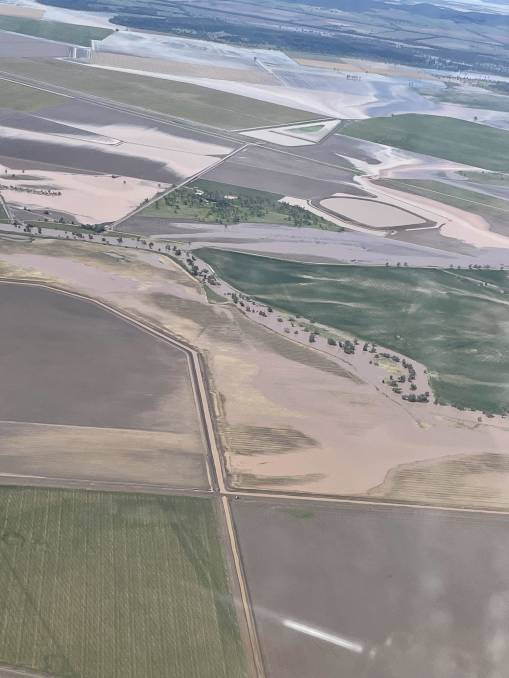 Flooding across the Gunnedah region as captured from the air by Jono Middlebrook, Middlebrook Air.

NSW Farmers is calling for the existing declaration, which came into affect from November 9, to be made after widespread rain inundated areas across the state's North West and Central West regions.

However, floods in shires in the state's North West such as Gunnedah are yet to be declared a natural disaster, prompting the call out from NSW Farmers.

If the floods were deemed to be a natural disaster, it would unlock a number of financial support measures from the government which could be taken up by affected landholders.

NSW Farmers grains committee chairman Justin Everitt said potential support measures would be crucial to growers across the state, who are reporting that the floods have completely covered their crops, forcing their attention to turn from saving the harvest to minimising the damage to their properties.

"Part of farming is dealing with nature, but it is cruel for our growers to watch these amazing crops - this potential income after so many years of drought - drowned before they could be harvested.

"We urgently need a range of measures to help people start to clean up and get on with their lives."

Rabobank has thrown its support behind affected landholders by announcing a raft of support measures such as deferral of scheduled loan payments, waiver of break costs on early redemption of farm management deposits, waiver of fees on loan increases necessary for rebuilding operations and waiving fees for equipment finance contract variations.

"The key affected agricultural areas at the moment are located around Dubbo, Forbes and Moree, with the main impact for now largely a reduction in grain grades," said Rabobank group executive of country banking Australia Marcel van Doremaele.

"The damage, particularly for farmland near the Lachlan River around Forbes, could be significant, while some other areas will also be impacted by a wet harvest, with a corresponding reduction in grain grades and therefore expected returns."

The floods come as the Bureau of Meteorology forecast a La Nina weather system, which is predicted to bring a wetter than average summer to the eastern sates with an increased risk of tropical cyclones, heavy rainfall and widespread flooding.

More rain and possible flooding conditions are predicted by the BOM for the remainder of the week prompting fresh flood warnings for already impacted areas.