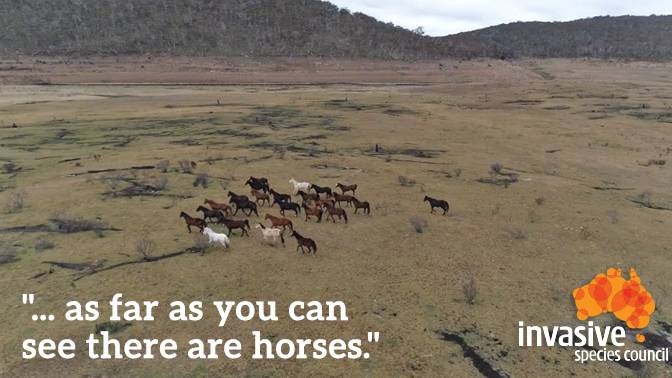 The Invasive Species Council is one of many groups who have lobbied over many years to have brumbies removed from Kosciuszko National Park.

Brumby population to be reduced to 3000

Former Nationals leader John Barilaro who brought in the brumby protection laws in NSW has agreed to a major removal of the population from Kosciuszko National Park, saying the new plan provides "certainty".

The Kosciuszko wild horse management plan released three months ago was agreed to by the NSW Government on Thursday and will see up to 11,000 wild horses removed from Kosciuszko National Park.

The aim is to have this removal completed by 2027 through trapping and rehoming, although some horses will be euthanased or taken to knackeries.

The decision on how many horses will be removed has been dragging on for five years as brumby numbers have steadily increased with very little removal of horses.

"Kosciusko National Park is a very special place that needs to be protected for future generations," Mr Kean said.

"Based on consultation with scientific and community representatives, aboriginal stakeholders and over 4000 public submissions, we can finally deliver a clear direction for one of the most special environment's anywhere in the country."

Across the Park, the plan provides for three broad management areas:

Areas in which wild horses will continue to occupy - 32% of the Park;

Areas from which wild horses will be removed - 21% of the Park;

Areas which are currently free of horses and which will be kept free - 47% of the Park.

The removal of wild horses will occur in accordance with best practice animal welfare requirements.

Member for Monaro John Barilaro said the plan was the culmination of years of work from a number of very passionate people who care deeply about the issue.

"I am so proud that we have been able to deliver certainty within my local electorate on this important issue, it has been years in the making" Mr Barilaro said.

"This final plan gives the everybody certainty by delivering a way to manage a sustainable population of wild horses in only very select areas of the Park, but more importantly it recognises their important heritage value for future generations."

"The removal and exclusion of wild horses from designated areas, and the reduction in the overall population, will provide effective protection from the impacts of wild horses for many threatened species.

"These include the northern and southern corroboree frogs, the smoky mouse and the broad-toothed rat as well as a suite of important alpine and sub-alpine ecosystems.

"Annual surveys of the wild horse population will help monitor progress toward the targets in the Plan.

"The implementation of the plan is expected to begin immediately with the reintroduction of passive trapping and re-homing."

But Minister Kean has been hamstrung by draconian legislation that requires the protection of feral horses in Kosciuszko National Park. The reality is this plan is a long way from what's needed to solve the park's horse crisis, he said.

"Now that the plan is adopted the NSW government must get on with the job of saving Kosciuszko National Park from more than 14,000 feral horses.

"It is urgent to resource the plan and get boots on the ground to start driving down feral horse numbers in Kosciuszko.

"Key areas targeted for horse removal include Nungar Plain, karst areas at Cooleman Plain and Yarrangobilly, areas on the western park boundary and adjacent to the ACT border and Thredbo Valley.

"We remain deeply disappointed that 3000 feral horses will be protected in one third of Kosciuszko National Park, consigning areas to ongoing horse damage.

"This locks in damage to the Byadbo and Pilot wilderness areas in the park's south, areas of Indigenous heritage, wetlands such as the vast Currango peat wetlands in the north and critical habitat of threatened species such as the northern corroboree frog, stocky galaxias and the broad-toothed mouse.

"The new plan sees the introduction of a broader suite of control measures to address the 14,000 strong horse population, including ground shooting to be implemented by trained professionals under strict animal welfare protocols."

"The NSW government needs to explain why it didn't strengthen the draft plan in response to the thousands of submissions calling for significant improvements.

"The final feral horse plan is almost identical to the draft version, with only minor changes to horse removal areas," said Mr Trezise.

The Invasive Species Council and the Reclaim Kosci campaign said they will keep working to ensure that "the promised horse reduction measures are implemented immediately, horse numbers are reduced until there is no damage, damaged areas are restored and the Kosciuszko Wild Horse Heritage Act is repealed".