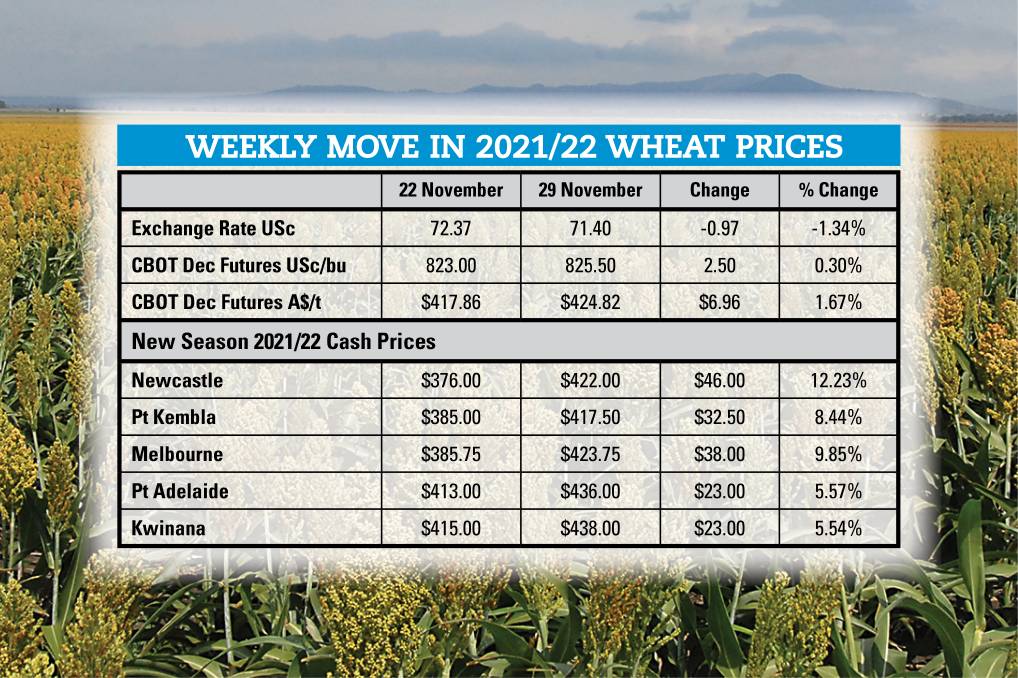 Nearby Chicago Board of Trade futures set new nine-year highs last week, and in Australian dollars moved to a new high since March 2008.

The market peaked at A$435 a tonne on Tuesday night, before pulling back on profit-taking ahead of the US Thanksgiving holiday.

There were only eight days in 2008 when December futures closed at levels above the current December contract.

That means current prices are at extremely high levels, even though the peak daily closing price was A$494/t on March 13, 2008.

We might not take out the March 2008 record, but we are effectively at record levels anyway.

We have now been above that benchmark for 13 trading days.

RELATED READING: Forward sellers must stay in the market

The strong CBOT values are also being reflected in our cash market.

While it is easy to suggest the rainfall events across Australia over the last week have allowed our cash market to rally, the upside we are seeing also has some of its origins offshore.

Prices at Kwinana and Port Adelaide were up $23/t for the week, with $7/t reflected in those gains in CBOT futures.

However, basis levels (the gap between CBOT futures and our cash market) are still no greater than what we would normally expect.

At $436/t for the start of this week, prices in the Port Adelaide zone remain the strongest in the country and are now at an all time high.

The previous high had been $435/t seen over three days in October 2018 (driven by the east coast drought that year).

Prices in NSW were above current levels during the recent drought, but in export zones we are at the top of the market and setting new highs.

Headers are starting to roll again in SA this week, and grower selling is expected against record prices.

It will be interesting to see if that selling pressure puts a cap on prices.

We are also seeing a bit of price fatigue in the futures markets, with a round of profit-taking last week causing the market to pull back from its highs.

That said, the factors that have delivered the current price levels have not dissipated at this stage.

If importers maintain their current demand, we should see the current international price-base well supported for a while yet, but it is hard to see why Australian growers would not be very active sellers at current prices.

The story Port Adelaide prices at an all time high first appeared on Farm Online.