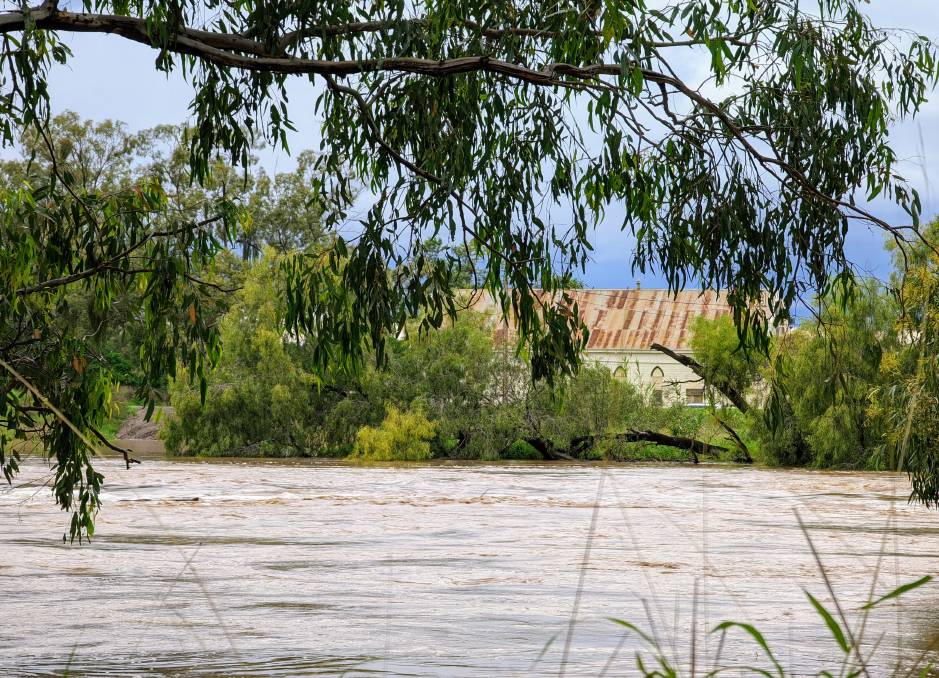 The Castlereagh River floods near Coonamble on Monday, but a new levy bank has held firm. Photo by Carly Chynoweth.

It's a dire situation being played out along many areas of inland NSW as floodwaters cut through farmland and farmers watch potentially high-yielding crops sitting there unharvested and potentially downgraded or destroyed.

At Coonamble in north-west NSW, it's the same situation as the river threatened the town on Monday as the new levee bank held firm on the fast-flowing Castlereagh River.

The floodwaters though are passing quickly downstream (the Castlereagh drains very fast) through prime cropping land.

Many farmers are unable to get to the riverside paddocks because of all the water lying around from the recent heavy downpours adding up to over 100mm since the rain event started. And it's the rainfall just sitting in paddocks that is hurting the most.

Only eight months ago the town was flooded by mice not water, and that is not an exaggeration.

Many mice plague experts said only a flood and heavy rain would destroy the mice nests, and although this appears to have happened at the moment and the mice have gone, the cost in the paddocks from the heavy rain to crops as been almost as equal to mice damage.

Only about 30 per cent of the crops are harvested in the Coonamble district and many harvesters have already started leaving the town heading south to other contracts, with many farmers unsure when they may return.

Coonamble shire mayor Al Karanouh said over the last three days the harvesters have all started moving off south - they simply can't wait around for paddocks to dry off and need to keep their machines operating.

It's a commercial decision but a painful one that they need to make, with many harvesters entering into agreements to return later when the area dries off.

"I'd say in the district only 30 to 40 per cent of the crop has been harvested. This will be a huge blow. Some crops were so thick the harvest machines were going at 2km/hr.

"A lot of the harvesters have just left and this will be a blow to farmers and also the hotels, pubs and clubs in town with the loss of the extra business. I am feeling the loss myself in my cafe.

"There's been so much rain over the last week almost 120mm-130mm on some places down to the Pilliga. The new levee bank has saved us, but financially the town will suffer."

Adam Macrae, Tyrone, saw his uninsurable haystacks evaporate before his eyes in the mouse plague last March and now he's seeing his hard-earned wallow in water. The Castlereagh runs through 10km of his property and he fears for his good barley crop down by the river. He can't get through to see it in the sodden paddocks. Some of it is a bit higher up so it may be all right.

He hopes his chickpea crop will be okay, but that's also in the lap of the rain gods. The harvester is stuck a fair way through that.

He's one of the luckier ones as he mainly concentrates on his livestock, but he's put plenty into his barley and chickpea cropping to make the most of high prices.

So far he's only been able to harvest 40 hectares of his 730ha of cropping.

Luckily his chickpea harvester has agreed to stay on to see out the harvest. And it may take 10 days before they get started again. "He's committed to do it so that's great," Mr Macrae said.

"We've had about 120mm since the time we wanted to start stripping. There's a barley crop down by the river but we just can't get down to it."

He reckons the flood is about 20cm shy of the big 2010 Castlereagh flood at Coonamble. 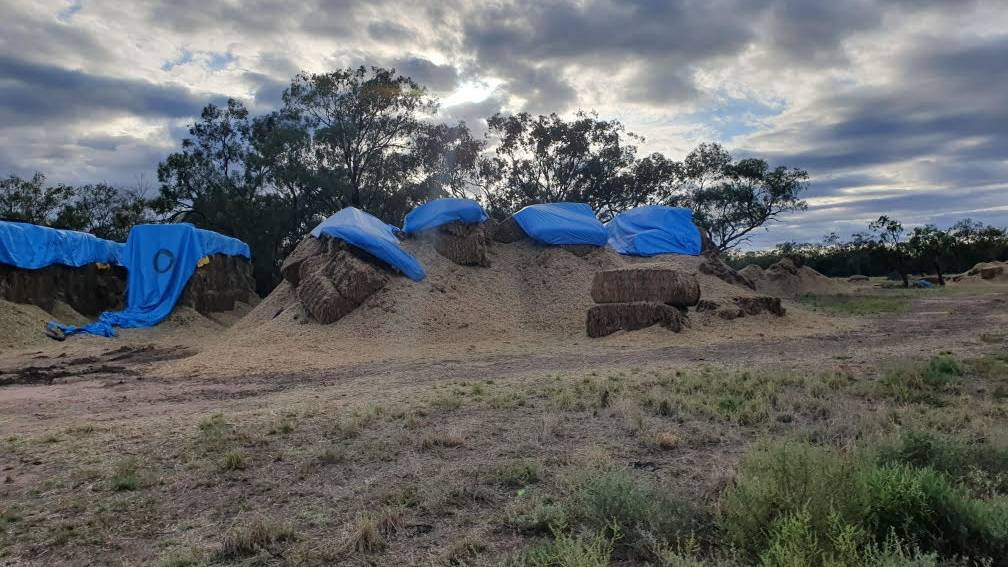 This was the scene at Tyrone at Coonamble in March when the mice plague brought down whole huge stores of hay and turned it into unusable chaff.

It's hard to take after all the battles with possible gas pipelines and then the mouse plague. "It's not pretty mate,' he simply says. "Everything was looking great with some big yields hoped for."

He says the Castlereagh drains quickly after flood events and they'll be harvesting again soon.

For the time being, he simply says of having to deal with mother nature again "that's cricket".

For the mayor of Coonamble who also battled the mice plague in his cafe, he says the mice had better be gone with the floods, as possibly one of the few positives from it.

"If they aren't gone I reckon we'll be getting in touch with the person who said floods would kill them off,'" he said.