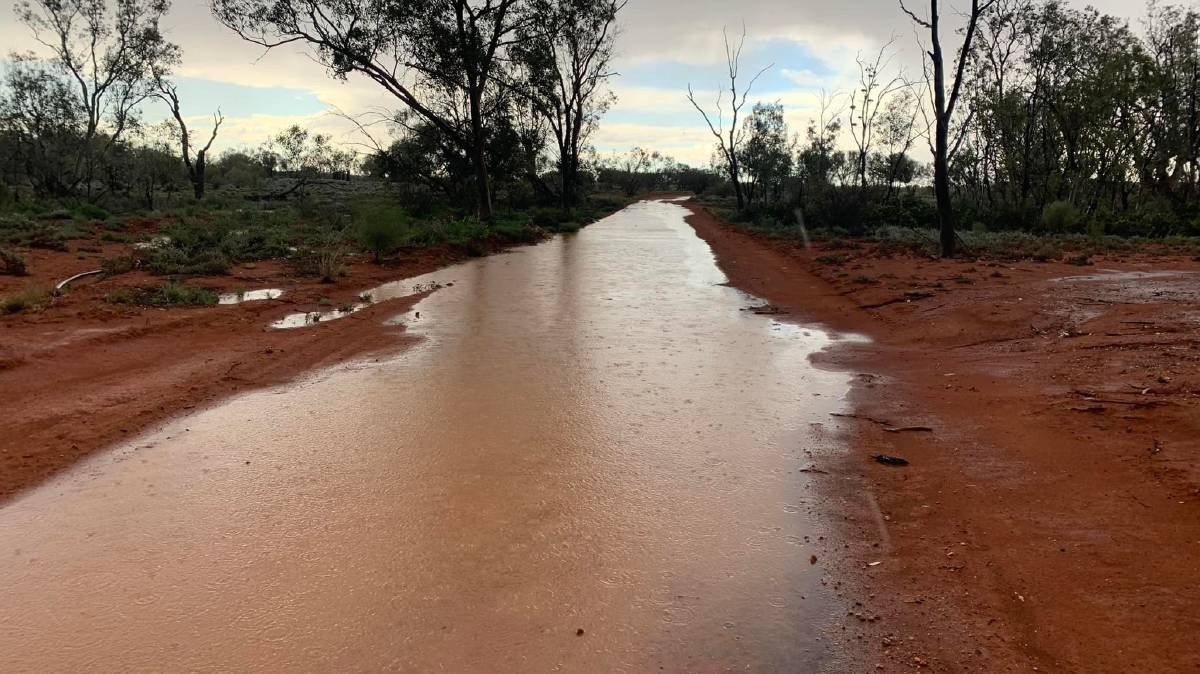 Water on the road at Wertago west of White Cliffs. The station has had nearly 80mm for the month. November totals have been astonishing for many areas of the Western Division, breaking many records and ending the drought in many southern parts. Photo courtesy Stuart Anesbury.

It's nice knowing that summer pasture growth is in the bag. That's the case for a vast area of the Western Division after record November rain totals.

With warm weather set to hit this week, the native grasses such as Mitchell grass will soon take off. For many in the Lower Western it has generally meant the possible end to a five-year drought.

Finally places south of Broken Hill down to Wentworth have received decent rain, some closing in on 100mm. That's including Kym Andrews, whom The Land featured only last month as being still in a long drought.

The Andrews are east of Broken Hill and in this rain event have recorded 96mm at the homestead, including 47mm in one hour.

"The Mitchell grass will get going soon and we should be right through the summer season. We are really back to normal. Despite the rain we have had no trouble with flystrike. All the dams are full and things are looking a lot better."

The Andrews run Merinos at Avondale. They recently had 100 per cent lamb marking.

Louise and Zane Turner at Goodwood Station north of Wilcannia who run Dohnes and also a farmstay business, say all their waterholes are full and summer pasture growth is assured.

They run about 4500 Dohne ewes and lambs. At one stage before the drought they ran 10,000 sheep but have decided to go for strength and meat by crossing Dorset and Suffolk rams with their ewes.

Louise Turner said they were also keen to run their property sustainably and their flock size at the moment they believed as appropriate for their property as they tried to rehydrate eroded gullies.

In recent lambing they had over 100 per cent marking. They've had about 130mm in the last couple of weeks. "All our waterholes are full and lots of people are coming out to see the birds here," Mrs Turner said.

At Langawirra Station, 120km north-east of Broken Hill, it received 61mm over 10 days for November, which was a big relief for Lachlan and Joanna Gall after a dry run from July to October.

Mr Gall said "However, the falls have been patchy, with a third of the property looking pretty good now and a third looking average, but the remaining third is still very dry and very much in need of effective follow-up rain soon. Our livestock numbers have recovered from the drought to be about 60 per cent of average."

"The picture at Langawirra is repeated right across far west of NSW. Some properties had a fantastic November with single day totals of 50mm or more recorded at multiple locations and a little bit of damage to fences and dams, but as you move further west average to very much below average year-to-date rainfall totals are more typical. For these pastoralists the season is on a knife edge, with more effective rainfall is required to capitalise on the fresh green shoots before the hot weather hits.

"Almost all of the rain received in November has been associated with patchy thunderstorms, which sees some areas receive a lot of rain, but nothing only a few kilometres away. This has been a feature of rainfall events in western NSW for the past few years. We're starting to call summer "storm lotto" or "hate thy neighbour" season as some places receive a good drink while the neighbours get to watch an impressive cauliflower cloud and perhaps receive a dust storm associated with wind off the storm cloud.

"Indeed, some pastoralists continued to send sheep on agistment during November even as some rain fell in the district, and some hay feeding is going on. At the moment there is no significant moves towards restocking in far west NSW as the current conditions are not providing enough confidence to do so.

"Many pastoralists are still not considering that their drought has broken, with recent rain only just giving their pastures a start and filling a few dams - they will need much more rain before they can rule a line under the drought and call it finished.

"Some pastoralists are already reporting problems with excessive numbers of kangaroos moving in on fresh pastures and nipping them off before they get a chance to establish."