The expansion of a Dutch-style glasshouse near Guyra was officially unveiled on Friday along with the expectation that one billion tomatoes a year will be produced as a result. 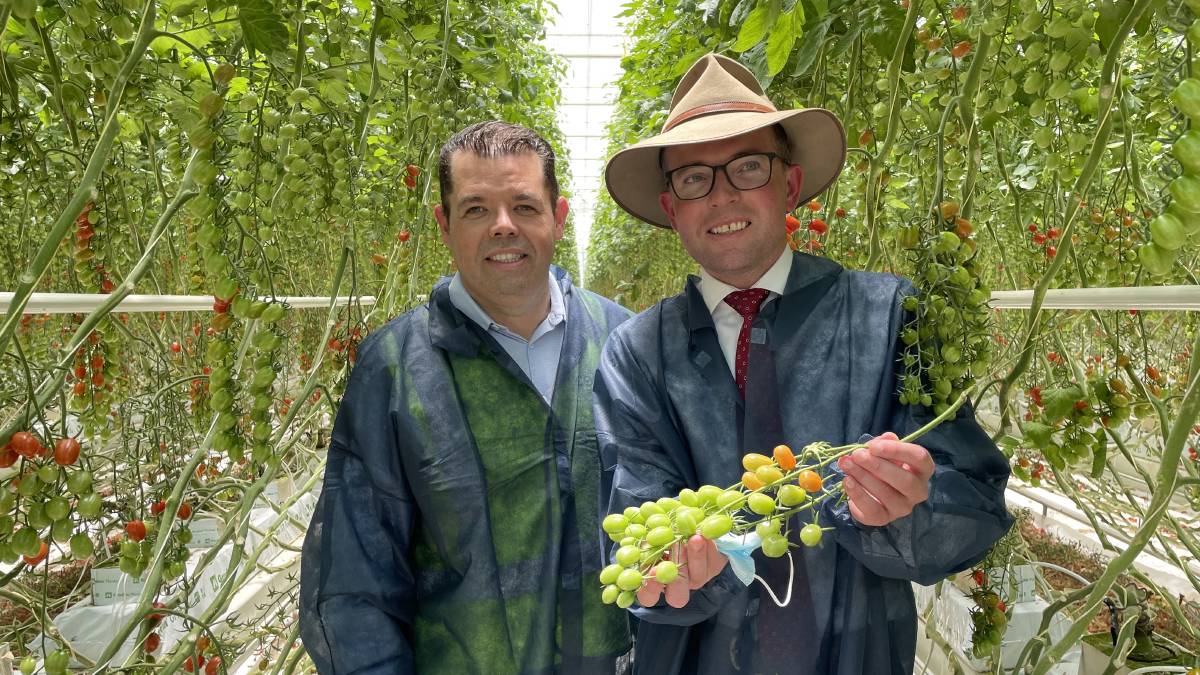 The public unveiling of 12.5 brand new hectares of Dutch-style glasshouse near Guyra will bring 140 to 180 new jobs to the New England while helping to lift annual production at the 40ha facility to one billion individual tomatoes, making the facility the largest in the Southern Hemisphere .

Member for the Northern Tablelands and secretary of the Armidale branch of the National Party, Mr Marshall praised Guyra Shire councillors in attendance who had supported the project and had communicated their support to State Government from the outset.

The public acceptance of this $80 million expansion struggled into being during the drought, when water supplies dried up and engineers had to re-calculate consumption, but the new numbers are resilient, with half the water and 60 per cent of fertiliser recycled.

Fresh bore water is stored on-site in dams before use to take pressure off underground supplies - effectively creating a water source battery - before being "shandied" with fertigation run-off which has been filtered and UV treated to kill bacteria.

Maxifort rootstock tomatoes are grown from European seed, sourced through Bayer DeRuiter and chosen because the variety is effective in supporting generative plants - the type that put energy into flowering rather than biomass.

Young plants are propagated on the nursery floor, flood irrigated with pH balanced and nutrient correct water. When stems are 1.5mm in diameter they are cut and grafted onto one of 11 commercial varieties of tomato.

The facility is recording 98pc success in this endeavour while industry standard is 91pc.

Young plants are fed with LED lighting to boost their strength before being transplanted into spun rock wool growing medium and fed drip irrigation. Stems rise ever upwards along corn-starch twine, seeking light that can be so intense during summer that shading and glass painting is required. Robots then scrub the paint off when daylight waness. Inside, fine-spray misters make the air tropical.

Winter is the best time to grow tomatoes, as it is out of season with the fruit selling for a premium. To condition the inside environment here at 1330m above sea level, gas and coal-fired boilers heat water that circulates in pipes between the rows that also work like rails to support the scissors-lifts workers require to tend their plants.

A single plant grows up to 30cm a week and lives 12 months, reaching a length of 15- 20m, its aged stem laid carefully at its base while the flowering crowns are allowed to grow ever skyward. With no bees pollination is done by hand, running a buzzer along the stems three times a week.

Tabs of parasitic insect eggs are stuck to the rows on a weekly basis To control white fly, thrip and mite. Sticky tape above the plants catches bugs and monitors populations.

"The idea is to use soft intervention," says Israeli-born head grower Tal Kenety.

Costa's vertical farming general manager, Jose Cambon - who is also in charge of the company's mushroom production - said integration of NBN communications within the factory would close the gap between production and supply chain data so that the supermarkets could know when a flush of fruit is ready for harvest.

"This is about consistency," he said. "And our yield per cubic metre of growing space is one tenth that of land production.

"Our founder Frank Costa passed away this year but he would have loved to have been here today to see this world-leading horticultural greenhouse."

Production in the packing shed is impressive, robot-driven trolly-trains bringing fruit to sorters who feed four machines that fill up to 2000 punnets every minute. Containers are 80pc recycled PET plastic, made in China, but there is a conversation starting with nearby University of New Meanwhile, says Guyra native and Costa's state manager Peter Davis, the company is already committed to fuelling the greenhouse facility with some bio-fuel sourced from council green bins.